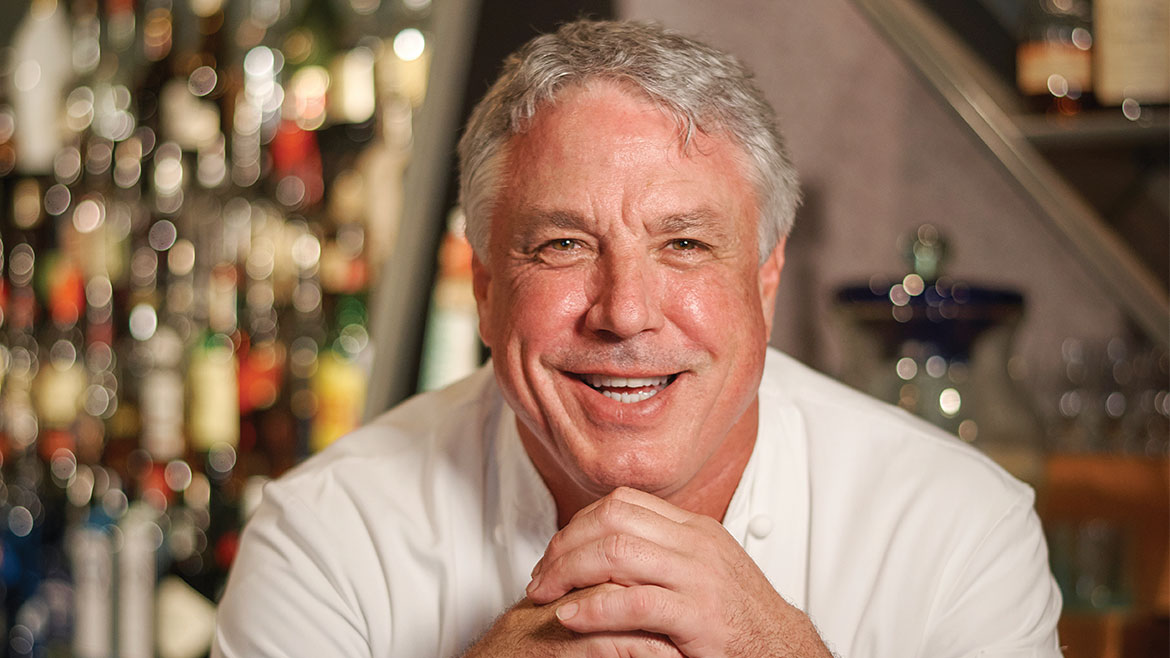 The cursive, cherry red letters of the Chris McD’s sign, placed on the green metal roof of Forum Shopping Center, offers a hint that you might find a totally different atmosphere inside — warm shades of brown and beige, the scent of steak and seafood cuisines. It’s the last thing you would expect to see among a grocery store, satellite college site, and several retail businesses.

“We pride ourselves on our fresh food, knowledgeable staff, and consistency for good service,” Chris McDonnell, the titular chef and owner of Chris McD’s, says.

The establishment draws in regular customers weekly, monthly, and annually. Chris McD’s gets chaotically busy during high-traffic events in Columbia, like football games and festivals, and the staff thrives on the opportunity to provide standout customer service.

“One of my favorite quotes is, ‘You can make up for bad food, but not bad service,” long-time employee Aaron Guinn says. “I love meeting new customers and seeing the ones who I’ve gotten to know return to the restaurant. They know the great food they are about to get, and it’s wonderful to see them leave happy.”

For McDonnell, it all started during his childhood, when he grew up playing in his mother’s kitchen. Back in the ’70s, his mother owned and operated a hotel restaurant in Chicago. He found his niche in cooking by playing around with recipes and watching his mother create different steak and seafood dishes. McDonnell decided to become a chef, and he attended the Culinary Institute of America, in New York.

After completing school, Chris received a job offer to be a chef at a resort in Hawaii. He accepted the job and found his passion for cooking with fresh seafood. Three years later, McDonnell and his mother were asked about a business opportunity with a partnership in Columbia. “The city had been looking for a change that they could invest in with its growing population,” McDonnell says. “So my mother and I were contacted to create a new restaurant.”

When the restaurant first opened, in 1991, it was different than it is now: There was a simpler flair in his dishes, an open kitchen, and sandwiches still on the menu. The restaurant that McDonnell really envisioned only came about a few years later, after the restaurant closed for a time.

In 1993, a kitchen fire caused hefty damage to Chris McD’s and shut it down for more than six months. Despite the loss, McDonnell refused to give up and instead looked forward. The menu and interior of the restaurant were given a complete makeover, but the casual personality of Chris McD’s remained.

“I cannot give enough credit to the staff members of Chris McD’s,” McDonnell says. “Each day, we come in and work as a team to make sure all roles are covered. It’s very much a ‘how can I help’ mindset versus ‘how can I help myself.’” McDonnell also takes pride in his staff members’ vast knowledge of the restaurant’s menu, which they can recite with ease.

After McDonnell quietly opened the restaurant back up, customers began to come back. The popularity of Chris McD’s spiked once more, and this time they were serving more than your usual seafood and steak. Fresh and new cuisines attracted the new customer base.

“Part of the original and continuing concept of the restaurant was to bring in fresh fish and dishes that you would find in the tropics,” McDonnell says. “I thought, why not bring up fresh snapper, mahi-mahi, tuna . . . things that you would normally find in a big city.” Aside from its fresh seafood, Chris McD’s offers a variety of steak, pasta, and chef specials that are carefully planned and prepared by McDonnell and his staff.

Certainly, the years don’t lie about the success of McDonnell’s concept, nor do the awards given to Chris McD’s. McDonnell competed and won the Missouri Iron Chef competition in 2002. In the same year, his restaurant won the Restaurant of the Year award from the mid-Missouri chapter of the Missouri Restaurant Association.

No matter how many awards or events the restaurant earns, there is only one focus for McDonnell and his staff — what’s happening now. Their most important quality is their new, creative concoctions. With their 25th anniversary coming up, McDonnell says that he’s likely to run a few new specials to celebrate.