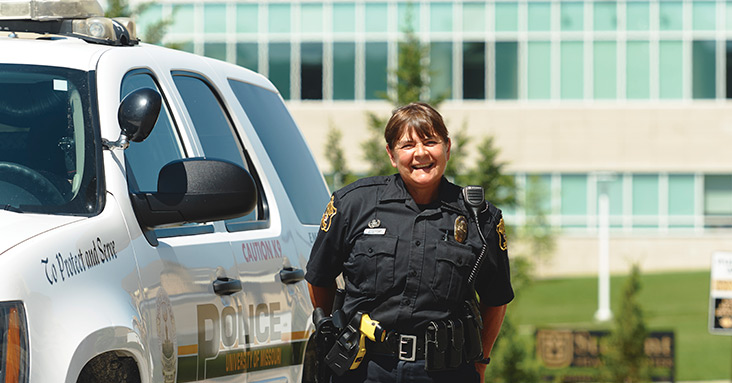 “Unsung”: not celebrated or praised

“Hero”: a person noted for courageous acts or nobility of character.

On a hot, sunny Monday morning, MU Police Officer Joan Haaf met us outside the police station on Virginia Avenue. As she pulled her white SUV out of the garage, I smiled. I knew we were about to meet the one and only Brass.

The MU Police Department hadn’t had a K9 team on their force for over a year when Haaf joined them in October 2011. The force knew that Haaf brought just the right amount of experience needed in order to train a bomb dog.

“MU has been a great place for me to land,” Haaf says.

Haaf’s 37-year career in law enforcement began in Pinellas, Florida. Once she was introduced to K9 work, she couldn’t get away from it. She was “fascinated by their intelligence,” she says.

Haaf credits her father for encouraging her to get into law enforcement: “I credit my dad for instilling in me the fact that it didn’t matter if I was female. If I wanted to do something, I could do it. He didn’t believe in the word ‘can’t,’ and he instilled in me not to let anyone tell me I couldn’t do something. When I chose the law enforcement career, he was behind me all the way. It helped me pursue the K9 job and everything else I went after in my career and life.”

Haaf was the only female in her law enforcement training institute, and in 1979, she became only the fifth female officer hired in Pinellas County. After she got started in K9 work, she spent eight years training two different dogs at that department. Unlike Brass, the dogs Haaf trained were tracking and patrol dogs — they were Russian trained, and their purposes were hunting for drugs and tracking people. A few years later, Haaf transferred to Hillsborough County, Florida, after marrying a sheriff who worked for that county’s department. There, Haaf had the opportunity to train her third dog.

“After a year and a half training that dog, I got my pilot’s license and had the chance to fly helicopters,” she reflects. “I ended up doing that for two years, and it was an absolute blast.”

Haaf’s third move took her to Big Horn County, Wyoming, where she was a task force officer. She spent 14 years with Big Horn County and did undercover drug busts and manhunts while managing day-to-day activities. In 2011, her friend’s son decided to attend MU for his doctorate degree. Haaf ended up making the move as well. She relocated her four-legged kids to Columbia.

Thanks to a donation from a private citizen, the MU Police Department had the chance to bring on a K9 when they hired Officer Haaf. Her partner, Brass, came from Shallow Creek Kennels, in Sharpsville, Pennsylvania, a premier police service dog training facility. The process for obtaining a K9 dog is a long one, as the dogs are pre-screened in Holland before making the trek to Shallow Creek Kennels. There, they receive more training before being paired with a handler. Officer Haaf and Brass have been together for a year.

“I have to start with book work before Brass and I can do anything,” Haaf says. “He’s a bomb dog, which means we have a total of 6 weeks of training after my book work. He has to stay in ready-response for bomb threats.”

Their training is ongoing, and Brass and Officer Haaf are on call 24/7. “I could be home mowing the lawn and get called in,” she says. “We have to be ready to go at all times.”

Brass doesn’t just serve as a fluffy companion, walking buddy, and extra vacuuming need for Haaf. Because he is specialized as a bomb dog, Brass and Officer Haaf search buildings before sports events at Faurot Field; special events, such as concerts at Mizzou Arena; or festivals, if they request a search before a busy weekend. There are no other explosive K9 teams in Boone County, so Brass and Haaf stay busy.

“At the [Salute to Veterans] air show this year, we went down each morning and did a pre-sweep around the planes and concession stands before the crowds arrived,” she says.

Brass is Officer Haaf’s fourth K9 dog. When asked what has kept her coming back to training the dogs, she says: “the incredible brains of the dog and watching the animal work. In my first couple of dogs, they were tracking dogs. Man tracking was my favorite. Watching detection dogs pinpoint even the smallest amount of something makes you go, ‘Wow!’”

“Don’t let her fool you,” Major Weimer chimes in from the end of a long table in the station’s conference room. “Officer Haaf is always willing to help out whenever and wherever. Beyond the working aspect with Brass, there’s also the crime prevention side . . . Officer Haaf doesn’t only have the technical skills that make up a good officer, she also has the skills to interact with the community. Because of Brass, she does that a lot. She’s always there to get the job done, and she’s great with the community she’s a part of.”

When Haaf and Brass walk around on campus, she says, “Everyone’s eyes go directly to him. I’m invisible.”

In her spare time, Haaf enjoys taking her four “kids” pheasant hunting in Higby, Missouri. Shasta, Lexi, Colt, and Marley enjoy getting out and about with Brass and Haaf.

The next time you attend a Mizzou football game at the stadium or concert at Mizzou Arena, know you’re sitting in a safe place — thanks to Officers Joan Haaf and Brass.

A Home Away from Home