In a 2015 company analysis, Delta Systems employees discovered that they attract, on average, a new client or project every nine days.

“Figuring that out was a bit surprising because we don’t really advertise — it’s all word-of-mouth,” says Delta Systems’ owner and president, Steve Powell. “It’s very pleasing to know that we’re doing something right and that we’ve got a reputation built up.”

Delta Systems creates software solutions to streamline business’ operations through databases, e-commerce sites, membership tracking, and more. The company, which celebrated its 30th anniversary in May, has worked with over 900 companies and thousands of individuals to date. Powell says that, at any given time, Delta Systems is working on 100 to 200 projects.

About 40 percent of their clients are outside of Columbia, and more than half of their 27 employees work remotely from eight states.

In July, all of Delta Systems’ employees will gather in Columbia to celebrate a business whose face has changed in 30 years, but still operates on the same values.

Debin Benish started Delta Systems as a computer training and consulting company. She worked out of her home, training people to transition from typewriters to computers.

Powell says Benish ran the company like a charity, helping nonprofits adjust to the internet age, and often neglected to pay herself a salary.

As companies Benish trained expanded, they outgrew Excel. When she taught them about Microsoft Access, a database creation system, the companies said it was too complicated. They asked her to build it instead. At that point, Delta Systems didn’t have any programmers. That’s when Powell came in.

Powell calls 2004 a watershed moment for the company. The lease for their office on Old 63 was up, and Benish was considering retirement, so she asked Powell if he was interested in buying the company. After some consideration, Powell said yes and purchased Delta Systems in 2005. Less than a year after the sale, Benish died of cancer.

“I think we’ve done a good job continuing her legacy of the training and the support,” Powell says. “And we’re providing value to companies and skill sets that people just don’t have.” 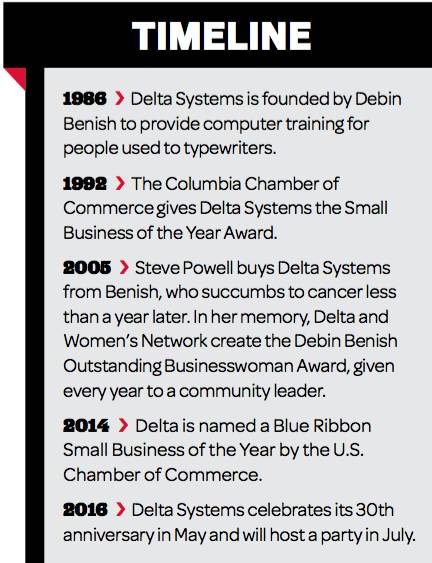 In 1996, 70 percent of Delta Systems’ revenue was in training, with the other 30 percent in development. In 2003, one year after Powell joined the company, training made up only five percent of business. Delta Systems’ clients have included national brands, like McGraw Hill and Arm & Hammer, and local organizations, like EquipmentShare, True/False, and the Missouri School of Journalism.

Most of Delta Systems’ clients come from referrals or past employees. The average length of their relationships with clients is seven years, but some companies, like Shelter Insurance, have worked with Delta Systems for all 30 years.

While building databases for e-commerce sites, Powell says he realized that the only difference between his company and his client was that the client filled the orders.

“We didn’t really have a rudder to our ship, we just kind of blew around,” he says. “We were like, Let’s do something more tangible. We need a service-offering software or we need to actually sell stuff online.”

The company started Delta Commerce in 2014 to sell products online. Among other things, they sell high-quality machetes, used in agriculture.

Delta Systems now sells service-based applications for a variety of companies. This way, they develop the product once and are able to sell it multiple times. In 2010, they released a contract manager for nonprofits or chambers of commerce to track sponsorships. The Columbia Chamber of Commerce was the first to use the product, named EasyTRC

“With EasyTRC, the amount of paperwork we have now is minimal,” President Matt McCormick says. “It used to be extremely paper-heavy, where now we’re able to do it digitally.”

McCormick says each year they make an effort to find out what could be better with the system.

Other projects that Delta Systems is developing include FestMaker, a festival organization system designed for True/False; volunteer management and communication tool DoGooder; and others.

“We have to become an expert at the customer’s business and then figure out the process they’re doing and turn it into an electronic system. That’s hard,” Powell says. “It’s confusing and challenging, and we love that.”