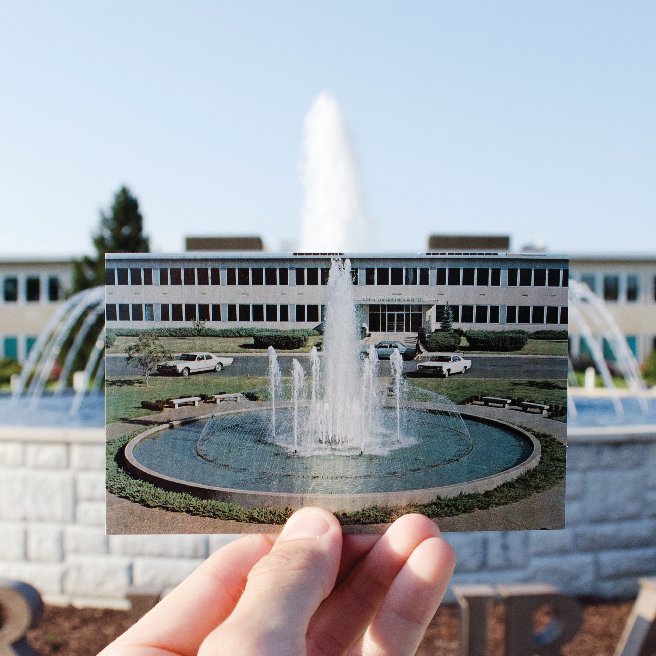 The Shelter Fountain was approaching its 50th anniversary when the announcement was released in fall 2014 — the fountain would close for renovations.

The fountain’s age had started to show. Leaky plumbing and faulty wiring stirred concern about its ability to survive another 50 years.

The fountain stood at 1817 W. Broadway since Shelter’s earliest days, before the company even became Shelter Insurance. The company was founded in 1946 as the MFA Mutual Insurance Company. In 1957, MFA completed construction on its corporate offices in Columbia.

The next decade was one of rapid growth for MFA, as the company added life insurance and regional claims to their services while managing to expand their operating territory to nine more states. In 1965, the fountain was built, functioning as a symbol of the company’s prosperity and a foreshadowing of their success in Columbia.

The fountain kept pumping when the company cut ties with MFA and adopted its current name in 1981.

From the fountain’s completion in 1966 to its closing in the fall of 2014, it has hosted proposals, prom photos, 49 spring opening celebrations and countless other events and moments in the lives of Columbia residents.

On April 30, the newly renovated fountain reopened to mark the beginning of spring for the 50th time.

Now, the total water surface area is 2,100 square feet, with 1,800 gallons per minute of water in motion, 49 nozzles and approximately 38 feet of waterfalls. The center basin’s nozzle sprays 20 feet high. These features, and the fountain’s new LED multi-color lights, will allow the fountain to function like never before, according to Jay MacLellan, media relations director at Shelter. Expanded light and water shows are now a possibility at the site.

The Shelter Fountain will host as many exciting events in its future as in its past. It will continue to mark the arrival of spring in Columbia and will continue to be a symbol of the Columbia community. Updates and repairs have ensured this landmark will see many more anniversaries.