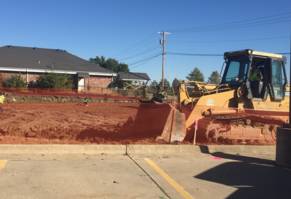 Last year, Woodhaven, a nonprofit that provides residential and community services to adults with disabilities, celebrated its 50th anniversary. As this milestone approached, Mark Palmer, CEO, sat down with the board of directors and decided on the best way to properly acknowledge the occasion: by continuing to better serve their residents.

They came up with the “Building on Our Strengths” campaign, which pledged to raise $1.9 million to build a new training facility for staff, as well as accessible apartment housing for their aging residents. This need has emerged within the last 30 to 40 years as adults with disabilities’ life expectancy has grown, Palmer says.

Through support from friends, donations from the community and relentless fundraising, Woodhaven reached the $1 million mark in August of 2014. They then applied for aid from The J.E. and L.E. Mabee Foundation, which provides challenge grants to finish out campaigns. They agreed to cap off the campaign with the final $100,000 if Woodhaven could raise an additional $800,00. In late September, the goal was met, and Woodhaven was finally able to begin the next phase of the project.

This new campaign has seen support from residents, mainly through their brick campaign, which looks for donations to help their memorial garden, a place were residents and employees can go and honor those that they have lost.

The nonprofit serves 112 adults, ages 22 to 73, in their 50 apartments and homes throughout mid-Missouri. Woodhaven began on May 1, 1964, when Palmer’s grandfather began providing housing services for children with disabilities. At this time, aid from the state was nonexistent. Many children were being put up for adoption due to their parents’ inability to take care of them. There was an explosion of these disability services in the early ’60s, Palmer says, mainly managed by families or churches — or in Woodhaven’s case, a combination of both. With the help of the Disciples of Christ, Palmer’s grandfather became the first administrator and founder of Woodhaven.

For the past three generations, this work has been sort of a family tradition. Palmer’s father held church camps for people with disabilities, his mother was a special education teacher in Iowa and both sisters have been in the field. “Its really been passed down from generation to generation,” Mark says.

As Woodhaven continues into the final stages of their campaign, the organization is looking forward to celebrating their accomplishments with a groundbreaking event on Friday, Oct. 23 and a ground blessing on Saturday, Oct. 24.

The training facility construction has already begun, and the organization hopes to have the full project completed by spring 2016.