Art [noun]: the quality, production, expression or realm, according to aesthetic principles, of what is beautiful, appealing or of more than ordinary significance. Columbia’s art community is thriving, and these four local artists are part of the reason why. 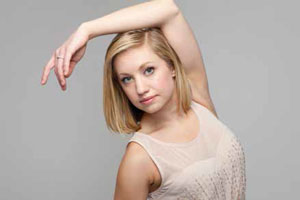 Caitlin Younker began dancing as an extracurricular activity when she was 10 years old simply because she enjoyed it. It quickly grew into a passion and eventually became her career. Caitlin is originally from Rochester Hills, Michigan, and moved to Columbia in 2011 to work as a professional dancer with the Missouri Contemporary Ballet. This is her fourth season with the company.

“Moving to Columbia to dance with the ballet has been one of the most fulfilling opportunities of my life,” Caitlin says. “The city is very receptive and supportive of the arts, which is so important in our line of work.”

Caitlin continues to choose dance as an art form because it allows her to express herself in a way that is personally fulfilling while also speaking to a wider audience. Since being part of the company, she has had the opportunity to perform at the Missouri Theatre and Jesse Hall, as well as tour all over Missouri and even perform in New York and South Korea. She also enjoys doing outreach performances at lo 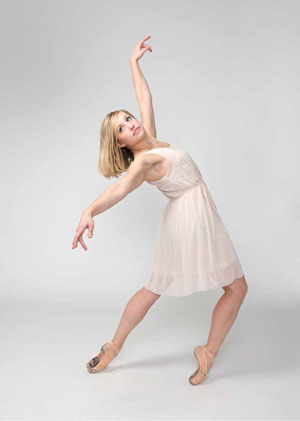 “I love being able to share what we do with as many people as possible,” Caitlin says, “so my dream is to continue dancing as long as my body will allow and tour more extensively all around the world.”

Karen Mareck Grundy, the artistic/executive director of the ballet, loves the fact that Caitlin has made huge strides as an artist and thrives on bettering herself emotionally, physically and artistically. “Caitlin is an extremely hard worker, and the energy she brings into the studo and the stage is contagious,” Karen says. “Caitlin definitely continues to push herself, and she is an absolute asset to Missouri Contemporary Ballet.”

“I love dancing with a company that encourages me to test my limits and grow as an artist,” Caitlin says. “Dancing with Missouri Contemporary Ballet has also opened doors for me in the world of dance education and helped me discover how much I love teaching the next generation of aspiring
ballerinas.”

As an artist and educator, Caitlin says she feels very lucky to call Columbia her home.

Find out more about the MCB • missouricontemporaryballet.com

Wes Wingate began learning classical piano at age 4. He grew up in Jefferson City, studied at Columbia College and Stephens before landing at the University of Missouri, where he pursued a degree in interdisciplinary studies. He played in rock bands throughout school and taught piano for six years at Hennessey Music in Columbia. When the music store closed, he kept providing lessons out of his home but knew he needed a long-term solution.

Wes eventually began looking for a new space to teach and ended up opening the Columbia Academy of Music and The Bridge in 2011, combining a teaching facility and performance venue in the North Village Arts District.

The Academy currently has 170 students, learning just about every instrument, as well as audio engineering and editing.

“Music affects everyone in the world,” Wes says. “They don’t have a choice, but it affects everyone in a different way. It can be whatever it is to you. It may be the center of your life, like mine, or maybe not. But I often tell the kids I teach that they will get out of it what they put into it.”

Wes is also the owner of Hometone Records, a music label featuring 10 artists including Don’t Mind Dying, Jenny Teator and the Fevers and Late Night Benedictions. His artists play and perform everything from blues to country to grunge rock. But Wes’ vision for the role of music in Columbia would not be complete without a live performance venue.

“The Bridge is a place where you can see up-and-coming artists that you haven’t heard of yet, but you’re going to, or at the very least, you should,” he says. “It also gives our local and regional musicians another venue to showcase their talent and build their fan bases.”

Brad Jenkins, the creative arts director for Woodcrest Chapel, went to high school with Wes. He has always appreciated his candor, incerity and unique artistic spirit.

“What I love about Wes,” Brad says, “is that he’s a working artist. He’s pulled the gear in and out of venues at 2 in the morning. He’s played sold-out shows and gigs where only girlfriends showed up. He’s been there. He knows that and still loves local music.”

Brad says it’s that love for music that brought about Wes’ two businesses and his hope of having Columbia’s best live venue.

“I love his heart and passion for music,” Brad says. “And now he’s learning how to turn all of that into something that helps support his family and local musicians. It’s a gift to our town.”

Wes says live music has been devalued, but he doesn’t intend to let it slip quietly into the night on his watch.

“We have every intention of trying to get the Columbia area excited about, and keep them excited about, seeing live music,” he says.
The Bridge is open Monday through Saturday and is located at 1020 E. Walnut St.

Find out more about The Bridge • thebridgecolumbia.com 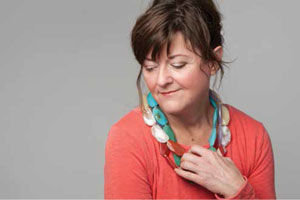 Cherie Doyen has spent 31 years in Columbia, where she’s dabbled in various art forms, including being a hair stylist and spiritual director. Her most recent journey as an artist came in the form of writing a book based on her childhood story, which includes the pain of sexual abuse.

“I kept hearing a voice say, ‘Write your book,’” Cherie says. “It went on for several years. It didn’t make sense to me because I got kicked out of my creative writing class for not being any good.”

Cherie says she does love words, though, so she stuck with it and self-published Junebug in June of 2013. Cherie found the writing process difficult because the story was so personal. “My daughter Danielle encouraged me to set my story aside, as if it were happening to someone else,” she says. “Then I could watch the story unfold from a different perspective and write it down.” 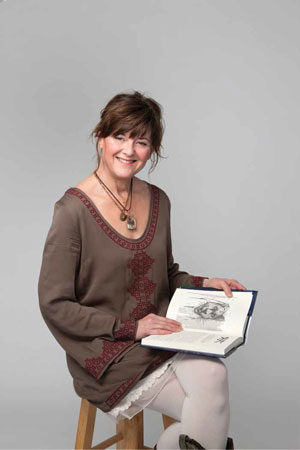 Soon Cherie found herself putting words to the movie that was playing in her head. Cherie’s younger daughter, Emily, came alongside and drew the illustrations that brought her movie to life.

Bill Clark, who reviewed Junebug for the Columbia Daily Tribune last year, describes the book as mesmerizing and a masterpiece for a first-time writer. “Her courage is truly astounding,” he says, “and her writing brilliant, with the clarity of language possessed by only a few among us.”

Cherie says writing gave her a way to tell her story that people could digest. “People think of child abuse as a single event because it’s the only way they can relate to it,” she says. “Junebug is aimed at the larger audience, to help them see what it’s like for those who experience abuse as a lifestyle.”

Junebug has opened doors for Cherie’s message of hope and healing and introduced her to people she never would have met otherwise. She believes motherhood is a sacred bond, and her hope is that writing will give her the platform to help women, especially moms who experienced abuse in their childhood. Her dream is to influence and support strong, powerful, compassionate mothers who are creating boundaries and safety around their kids.

“I always knew I had to be a different mom,” Cherie says. “Now it’s time to be a mom to more than just my kids.”

Junebug is available through all major online retailers. 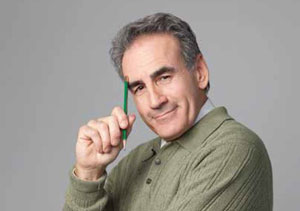 Lonnie Tapia graduated from Hickman High School, along with his wife, Susan. They lived on the East Coast for 12 years and have been back in Columbia for 15. Lonnie is an accomplished artist in many mediums, including drawing, painting, photography, sculpture and graphic design. He has worked in retail for The Limited Division and Venture stores and as a designer for the Soil Conservation Service.

By all accounts, Lonnie has led a charmed life as an artist.

Yet, after spending a lot of time contemplating what’s most important about life, he discovered a passion to give something back. Even after all his success as a professional artist, he says the most significant thing he can do with his art is to pass it on. This philosophy led him back to Columbia
and into the field of teaching.

Lonnie spent several years subbing for area colleges as well as Columbia Public Schools to get a feel for which age group would fit him best. Last year his quest led him to Father Tolton High School, where he serves as the art teacher. 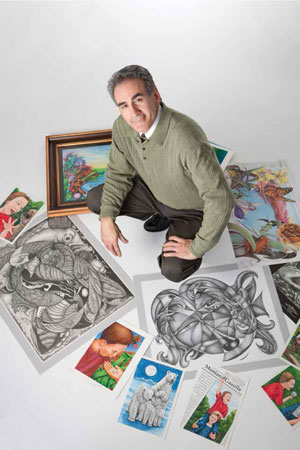 “He has a way of getting things out of the kids that they didn’t even know they had in them,” says Mary Creach, who works with Lonnie at Father Tolton.

Lonnie believes in teaching versatility to his students and encouraging them to create from what’s inside of them. “Let your imagination rule what you’re doing,” he often says, and he models this by letting his pieces develop on their own, too, rather than striving for a certain style.

Lonnie is most excited about a set of new drawings that he is on the verge of publishing. He calls them “instinctivism.”

Lonnie describes instinctivism as interactive art. He starts with doodling, sees where it takes him and never erases a line. He lets the drawing evolve unto itself. The result is interactive art that he says is creative, stylized and instinctive.

“As you rotate the piece, you decide how you want to see it,” he says. “You can change the angle every day to see something different.”

According to Lonnie, instinctivism would be a new genre, a new “ism” in art to add to the 37 that already exist.

“I’ve been sitting on this for years, but now is the right time,” Lonnie says. He wants to launch instinctivism from Father Tolton, making some money to put back into the school and putting them on the map as a creative source in the Midwest.

Who is Karen Mareck Grundy?

Who is Kristie Wolfe?