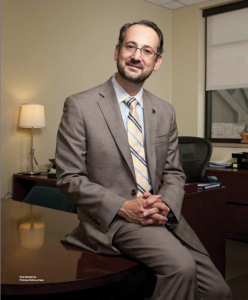 After 10 years in the Columbia Public School system, Superintendent Peter Stiepleman has managed to identify his passions and establish the core tenets of his future administration — achievement, enrichment and opportunity — but it is, as ever, a work in progress.

The day before he formally assumes the role of superintendent, the far left corner of his neatly decorated office is filled with drafts of mission statements, community goals and organizational values.

On a list of guiding principles, positive attitudehas been crossed out in purple marker and replaced with positive approach; commitmenthas been substituted for loyalty. Stiepleman explains that he will continue to refine the guiding principles of his administration over the course of the coming weeks.

He points to one poster, which has replaced the internal goal “We will maintain funds at >16 percent” with “We will be fiscally responsible.”

“Sixteen percent is an important number for us in terms of grants, bonds and levies, but it’s not the clearest way of communicating our goal to the community,” he says. “We want to be an asset to Columbia, and when we talk about setting goals we need to make sure we’re meeting the needs of families and answering their questions.”

Community is vital to Stiepleman’s vision, as the district score card spread over his table attests. The color-coded chart, devised by Stiepleman and a team of other district administrators during a professional retreat, tracks four general focus areas: finance, academic, climate and employees. Climate, which includes sub-categories that track student engagement, parent involvement and community satisfaction, is easily the largest.

Stiepleman’s primary goal as a superintendent — his self-described “rallying cry” — is to reduce the achievement gap between the general student population and what he refers to as the super-subgroup: a category that encompasses students on reduced-price school lunches, students with special needs, English language learners, black students and Latino students. The score card on Stiepleman’s office table indicates that students who are members of this group earn significantly lower grades, especially in the fields of communication arts and mathematics, than students who are not.

Stiepleman hopes to lessen this achievement disparity by implementing more detailed internal measurements of success and enabling students in the super-subgroup to participate in school enrichment activities such as music, sports and drama. Students who feel a connection to their school community, he explains, are more likely to have higher grades and higher rates of attendance.

“I did music in school, and that absolutely saved my life in terms of giving me something to do and somewhere to belong,” he says. “If we look at our super-subgroup, only 7 percent of Columbia Public Schools’ black students, for example, participate in music activities like band and orchestra today.”

He suggests that the solution is to make activities more accessible to these students by removing or reducing the financial barriers that can prevent low-income families from participating in extracurricular activities.

“After the devastation in Joplin during 2011, when many families lost their homes and possessions, these who were less drastically affected set up a sort of rental bank of instruments that other community members could take and play,” he says. “Many families in our own community may have instruments that a family member used to play gathering dust in their homes, and that might be able to benefit children from families that cannot afford to rent or buy an instrument of their own. It’s an idea we’re working on.” 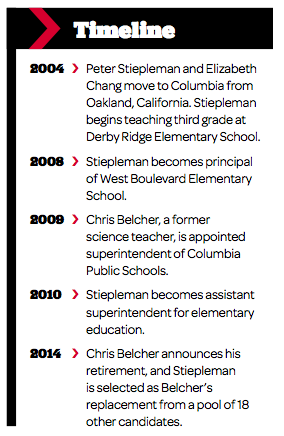 Stiepleman moved from California to Columbia in 2004 with his wife, University of Missouri associate professor Elizabeth Chang, and initially became involved in Columbia Public Schools as a volunteer while he completed his doctorate. He has since worked as a third-grade teacher at Derby Ridge, assistant principal and principal at West Boulevard and most recently as Columbia Public Schools’ assistant superintendent for elementary education.

Stiepleman credits his predecessor, Chris Belcher, with building a positive relationship between Columbia Public Schools and the larger Columbia community.

“He’s the consummate teacher,” Stiepleman says. “This community has proven itself wholly committed to public education, and Chris has been instrumental in helping to build that commitment and build that trust.”

Belcher, who served as Columbia Public Schools superintendent for five years, will remain in Columbia and begin training other educators to assume the role of superintendent in their own districts.

Stiepleman hopes to continue Belcher’s legacy of personal involvement in the community.

“I’m in a somewhat unique position of being superintendent of this school system while also having children going through it,” he says. “Very soon, I’ll have a son in elementary school, a son in middle school and a son in high school right here in Columbia. Anyone who sits in the superintendent’s office can say, ‘I’m going to administrate as though my own children are going through this school system,’ but mine really are. And I can honestly say I want the best for them, just like I want the best for every kid.”