With downtown Columbia’s explosion of growth in recent years, undeveloped lots are hard to come by. But the few undeveloped lots downtown are some of the priciest pieces of real estate in town; their permissive C-2 zoning and covetable location drive up prices. One location outside of downtown also made the list: State Farm’s 77.3 acres of farmland doesn’t cost much per square foot, but its appraised value of close to $700,000 beats downtown appraisals. Here’s a look at some of Columbia’s most expensive pieces of undeveloped real estate. 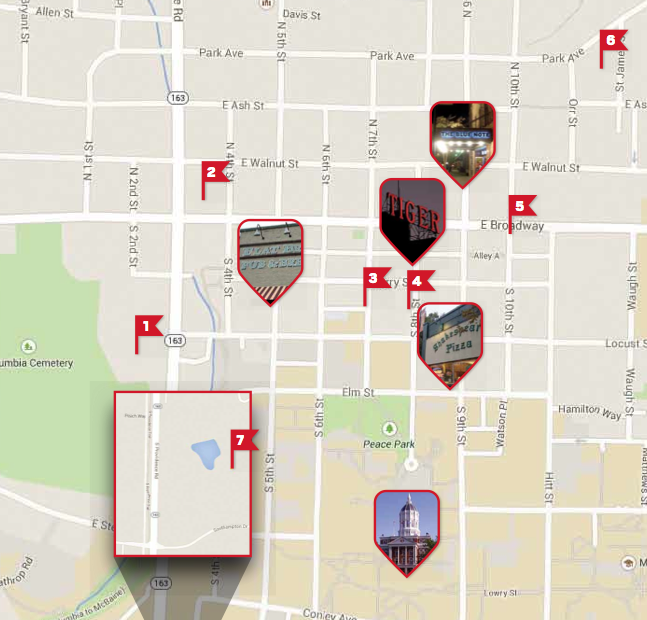 1. 201 S. Providence Road
TKG St. Peters Shopping Center LLC owns the 3.27 acres just south of Lucky’s Market and in front of the Columbia Cemetery. The land is a likely spot for Columbia’s seventh McDonald’s and an additional 15,000 square feet of retail space.

This 9,352-square-foot parking lot is owned by Boone County National Bank. Other companies own a handful of other undeveloped lots on Seventh Street, but the lot on Seventh Street between Cherry Street and Broadway is more expensive.

At 8,550 square feet, this parking lot is a little smaller than its Seventh Street neighbor and also a little cheaper. Last Enterprises LLC owns the space, as well as a less-expensive lot behind it.

5. Corner of 10th Street and Broadway

This 7,713-square-foot property is currently a private parking lot next to Red Mango in downtown Columbia. It won’t stay that way for long though. BMT of Columbia LLC owns the land and has plans for a five-story mixed-use space that will have retail space along with 28 apartments for Columbia professionals.

Ameren Missouri currently owns this 1.5-acre site where it once operated a manufactured-gas plant. The plant closed in 1932, but tar from the plant lingers in the lot’s soil. Workers are excavating 36,000 pounds of soil as part of a project that will continue until July. After cleanup is complete, the City of Columbia has first dibs on accepting or denying Ameren’s price for the land.

State Farm owns 77.3 acres of farmland near Rock Bridge High School. Although vacant now, the land is prime for future development. State Farm used to own even more of the space. In 2012, it sold 25 acres to University of Missouri Health Care, which plans to open a new clinic on the land.

Spring into the Housing Market