Wine and Dime: The Art of Faking It

With a business based on the global Internet network, most of Neil and Jessica Kohler’s Web design and development clients are headquartered out of town or even out of the country. So the Columbia couple primarily uses PayPal to send invoices and receive payments for the work they do through their small part-time business, Kohler Creative and Consulting. Some 95 percent of the Kohlers’ clients pay through PayPal or payment providers such as Amazon Payments or Google Wallet, Neil Kohler estimates, to avoid having to send credit card information over the telephone or in an email. Still, Kohler’s perspective on the payment provider is mixed. PayPal is a “necessary evil,” he says, brought on by the long-distance nature of his clientele. The Kohlers’ business income ultimately winds up in a credit union account.

“We use PayPal primarily because our clients use it,” Kohler says.

Not only have clients and shoppers made PayPal a ubiquitous service, but they’re also tapping into a growing number of alternative payment methods. Mobile payments, digital wallets and even alternative currencies are among the financial services that have been gaining traction outside the traditional banking system in recent years.

The Missouri banking industry is responding by developing its own versions of the more popular alternative services and products. Industry leaders are rolling out products ranging from bank-based mobile payment processors to turnkey prepaid cards in order to compete.

“Innovation — technology — is driving new products and services into the marketplace that benefit the consumer,” says Max Cook, president and CEO of the Missouri Bankers Association.

Bringing competition to another level

These nontraditional financial services compete with the banking industry on a couple different levels. Some of the most prominent, such as PayPal or digital wallets, add a step to the payment process but don’t necessarily bypass the banking system. The vast majority of digital wallets are linked to a debit, credit or prepaid card that’s been issued by a bank, says Steve Kenneally, vice president of the American Bankers Association’s Center for Regulatory Compliance. The ABA, headquartered in Washington, D.C., is the largest banking trade association in the country.

Even prepaid debit cards aren’t necessarily a nonbank product, though they’re often considered a way to get around having a traditional checking account. Indeed, the banking industry has shown a growing interest in pursuing the prepaid card market.

But other alternative financial services circumvent the banking industry entirely. Crowdfunding, for example, is a way of financing startup projects or businesses by raising money through numerous small investors rather than a bank, usually through judicious use of social media. Bitcoin, a digital currency, is another financial service with increasing appeal that stands outside of traditional banking parameters.

As Kenneally notes, different banks offer different responses to these relatively new financial-service rivals. But bank officials at various levels consistently argue for regulation of such services, both for consumer protection and to level the industry playing field.

“Our concern is that consumers may chase after the latest shiny payment service without concern for the lack of consumer protections,” Kenneally says. Kenneally contends that any glitch in the payment system — or a more significant problem, for that matter — is liable to reflect poorly on banks because consumers consider banks central to the system.

Cook, of the Missouri Bankers Association, points to banking regulations that he believes slow innovation in the industry when calling for “competitive equality” that produces oversight without overkill. 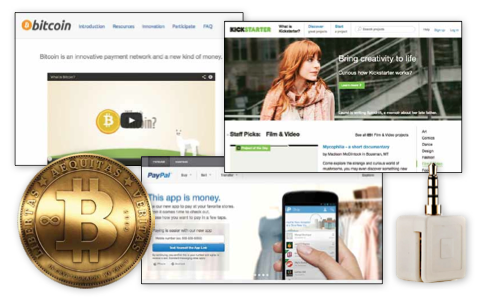 Meanwhile, Missouri banks are working to level the competition on their own. In some instances, alternative financial service providers have created market opportunities for the bank industry.

That’s been the case with Square, the mobile payment company that provides a reader users can hook up to their phones to accept credit card payments. Square’s popularity prompted Central Bancompany about a year ago to start offering QwickPAY, a bank version of the mobile processing service, says Matt Tollerton, the company’s vice president of ecommerce. Central Bancompany is the parent holding company for 13 banks — including Columbia’s Boone County National Bank — in Missouri, Illinois, Kansas and Oklahoma. QwickPAY offers “almost the exact same thing” as Square, plus some additional services such as return processing, Tollerton says.

Central Bancompany also is working on providing services now popular through PayPal and other emerging technology companies. Tollerton says the company aims to have a person-to-person payment service ready to go by the end of 2014, for which customers could log into their banking accounts on computers or mobile phones to send money via email or text. Central Bancompany also is working on a digital wallet service, though whether that will come through is uncertain right now, Tollerton says.

“It’s kind of waking us all up,” says Tollerton of the competition from alternative financial services.

The Missouri Bankers Association is alert to the opportunity presented by prepaid cards, a fast-growing payment method that includes such entries as the American Express Bluebird card. Late last year (December 2013), Missouri’s banking association endorsed a turnkey prepaid card program that the American Bankers Association launched in the fall of 2010. Although these prepaid cards are bank branded, the ABA provides Bank Identification Number sponsorship to member banks, which allows smaller institutions access to MasterCard without the overhead, says Bill Kroll, an ABA subsidiary executive vice president. More than 170 banks throughout the nation have signed up, making it one of ABA’s more active programs, Kroll says.

“This is, I guess, for now, an answer to the Bluebird-type product, though I wouldn’t say it’s the end all,” Cook says.

Even some banks that have taken little note of the competition are prepared. The Columbia branch of The Bank of Missouri rolled out a couple PayPal-like services last summer, though nontraditional financial services haven’t had much effect on the bank, says Donna Duncan, Columbia’s branch operations officer.

Too soon to call

Other nonbank financial services are drawing the attention but not a response from banking insiders. Bitcoin, the controversial virtual currency that was the subject of recent U.S. Senate hearings, has some Columbia and mid-Missouri partisan support but continues to be generally viewed with skepticism. Bank officials say it’s too soon to tell if Bitcoin should be of concern to the industry.

Columbia artist Paul Jackson agrees. Jackson used crowdsource funding in September 2013 to finance the publication of a collection of his paintings in a book entitled The Wandering Watercolorist. He started planning his crowdfund campaign in January using Kickstarter, billed as the largest funding platform for creative projects in the world, as his base. By May, he had launched his crowdfunding effort. By the time he ended his crowdfund campaign on July 1, Jackson had raised about $31,000 — exceeding his $25,000 goal.

Most of Jackson’s crowdfunding success came through his Facebook appeals and the following he already had. “If you have an audience already, it’s a great way to go,” he says.

Although an account holder in the traditional banking system, Jackson says he never considered taking out a bank loan to pay for his publication. The interest payments and documentation and other requirements all dissuaded him.

“With crowdsource funding, you’ve got none of that,” he says.

Missouri banking officials might not yet consider these types of alternative services competition, but they are keeping an eye on them.

“It’s interesting because new options get us talking, get us thinking and generating new ideas and ultimately help us create new products and services our customers want,” Central Bancompany’s Tollerton says. “I enjoy seeing these new players and emerging products.”

Briefly in the News: July