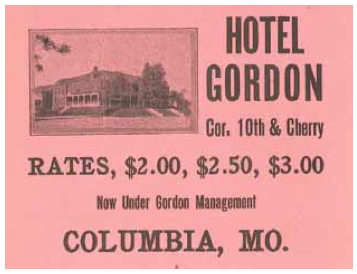 The visitors were impressed. Squiring a couple of old Mizzou grads around town recently left them rather impressed by all the development and construction both on and adjacent to the University of Missouri campus. Taking note of the considerable sprawl that has appeared since their last visit left them wondering what the city of Columbia would look like in, say, another 20 years. Although not in residence to participate in the ongoing daily discussion about the future of downtown Columbia, they were quickly brought on board about the challenge and balance of in-fill development as well as the major topic du jour — the fate of the Niedermeyer Building at 10th and Cherry streets.

They wondered whether downtown Columbia would ever accommodate a collection of high-rise office and business buildings, as is the case in Clayton. Will The District become an even larger off-campus dormitory as it rises upward and outward to accommodate more and more students? For now, the apparent highest and best use for certain parcels of land is the ongoing student housing and parking lot development extravaganza. With MU saying it can accommodate up to 40,000 students within its existing plant, private investors are still stepping up to feed and house these young people while university recruiters comb Illinois, Texas and other states to grab freshmen and upperclassmen wherever they can.

Benefits of growth
The economic benefit for the university with another 5,000 students on campus will be considerable. For example, if only 350 students sign up for a certain class — the overhead of instruction costs has already been established — but the auditorium can accommodate 400, filling those additional 50 seats multiplied by the tuition received per student on a credit hour basis would yield a very sweet gain. This profit, if you will, offsets the losses incurred by smaller, more specialized courses or could perhaps be set aside for research, infrastructure improvements or whatever.

Anyone who has lived here a while knows how expendable many buildings have become. Buildings have been summarily cut down with little or no objection for surface parking lots. Dozens of homes have been dispatched by the backhoe for nonresidential uses. The building at the northwest corner of 10th and Broadway lost the upper two stories more than half a century ago. Examining old photographs, plat books and Sanborn maps tells us a great deal about the evolution of Columbia’s business center since the community was first established.

Now perhaps it’s the Niedermeyer Building’s turn to be torn down; this heretofore ignored but rather elderly structure is what an investor would call a “hot potato,” or less charitably, a fire trap. Faced with costly, life-safety upgrades including a fire alarm system first — required for human occupancy — and a sprinkler system later hardly makes economic sense on a square-foot basis for any but the most charitable of investors given the existing two story L-shaped structure’s inefficient use of the tract it occupies. With its growing list of historical pedigrees — indeed, by the time you read this, we’ll have certified proof that even King Tut darkened the Niedermeyer threshold a very long time ago — the only sensible thing for those adamant about saving it would be to buy the place, restore it and bring it into full compliance with Columbia’s life-safety codes.

Cost of code compliance
What we’re slowly finding out is that there are other Columbia structures, said to number more than 100, that are faced with typically costly life-safety upgrades if they are to continue housing people; this includes the installation of a fire alarm system first and a sprinkler system later. Columbia, like virtually every other community across the land, has adopted various national safety codes that, in turn, it imposes on its citizens. Favorable insurance rates — the city and county’s “3” fire rating is considered exemplary — stems from adherence to and enforcement of these codes with the unfortunate consequence that in the future, some existing structures might never be brought into compliance. And then what?

Looking at certain buildings, some of them rather close to the MU campus, has us wondering whether a few structures about to reach their centennial will still be standing 20 years from now. One can roam about and make suppositions about buildings that might have to come down because they’re too costly renovate and bring into code compliance. Don’t be surprised if some are marked for destruction and replacement by something brand new — perhaps even ugly in the eyes of some — but in full compliance with all the current and relevant life-safety codes. It’s sad but true. Although we can say we’re all for preservation, still, there comes a point.