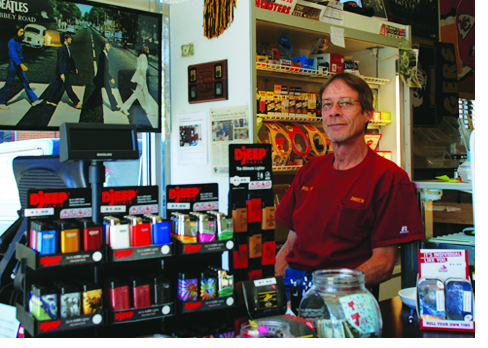 When Bruce Hendren traveled to Florida in February to watch the Daytona 500, he figured he was headed for a long weekend of fast cars and good times. What he wasn’t expecting was to come home with a new business venture.

While he was there, he stopped in a small tobacco store called Let It Roll that sold roll-your-own cigarettes. “I walked in as a customer,” Hendren says. “I really liked the product and the value. From the minute I walked in, I knew there was a chance it could work up here.”

Hendren says his new business, named Roll On Premium Smokes, is booming in large part because it’s centrally located in a college town. Price is another plus. Individual packs and cartons of his roll-your-own cigarettes sell for about half the cost of mainstream products. Another advantage Roll On cigarettes have over most name brands is that they’re composed of 100 percent fresh tobacco, without added chemicals.

Roll On expanded rapidly during its first three months, Hendren says, and reached a plateau during the fourth. “When I started, word-of-mouth was so fantastic and the growth was coming so fast that I could hardly focus on anything else but keeping the store running.”

Hendren says his customer base is predominantly 20-25 year olds. Customers select a tobacco and are free to roll a single cigarette, pack or carton. As an owner of a business that sells cigarettes at a cheap price to mostly college students, Hendren says he has yet to face any sort of criticism.

“There’s a taboo with nonsmokers, and I get it,” Hendren says. “My market was never to get people to start smoking who didn’t smoke. As long as my customers are 18, there’s nothing illegal here. Most people that come in here are smokers anyway.”

Before opening Roll On, Hendren drove a tow truck for seven and a half years. After almost five months of business, he says he remains satisfied with his decision to open a shop. “I make payroll every week,” he says. “I pay my bills every week. No raise yet, and I make less than my employees, but I expected that, too. I don’t have any regrets yet.”