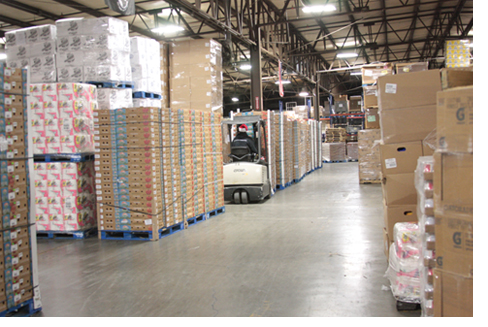 Peggy Kirkpatrick says her greatest wish is for her organization to close its doors because there’s no need for its services.

That’s not likely to happen anytime soon because The Food Bank for Central and Northeast Missouri is seeing more customers everyday.

“We’re serving greater numbers of people who need our help, and that’s great,” says Kirkpatrick, executive director of the food bank, with a bit of melancholy in her voice. “But best of all would be to not have anyone needing our help — that would mean everyone would be employed, there would be no homeless and families would have plenty of food in their kitchen pantries.”

Food is collected from retailers, packers, growers, manufacturers, wholesalers, distributors and through such private donations as food drives. “Food banks are, in business terms, wholesalers,” Kirkpatrick says. “We’re the supply line to the front line for food distribution. By collecting more food to feed the growing demand, the food bank found it had run out of storage room in the building that it moved into just nine years ago.

A $2 million campaign named the Food Distribution Center Expansion Project is under way to add more room for storage, among other improvements to its Vandiver Drive location. Philips Co., which sells wholesale electric equipment and supplies, rented part of the building from the food bank and has relocated nearby.

“We’ve expanded the cold storage because we’ve actually had to turn away food,” Kirkpatrick says. “Recently we were offered a whole tractor-trailer load of frozen meat, and we had to turn it down. We didn’t have enough space in cold storage. When they have it to offer, you need to be responsive to it.

The food bank also has expanded its volunteer room and break room. Last year nearly 26,000 volunteers logged in more than 66,000 hours. “We were turning away volunteers because we didn’t have space for them as well as for the food,” Kirkpatrick says. “We realized that something was definitely wrong when a food bank has to turn away food and free help.”

The Food Distribution Center Expansion Project has expanded the food bank’s cold and frozen storage by 40 percent. The volunteer room also has grown 40 percent, and there’s a new break room for volunteers.

Another noticeable improvement that’s part of the expansion project is a community room with space for up to 100 people. Kirkpatrick says the food bank will use the room for special events and such training as food handling, and it also will be available for community organizations.

“It will give us flexibility we never had before,” Kirkpatrick says. “We’ll be able to do training for our partner agencies and hold special functions for our donors. We never had a place where we could host so many people.” A warming room — not quite a full kitchen — is part of the community room where food may be brought in and heated before serving.

The front entrance and administrative offices are receiving much-needed makeovers as another part of the expansion project. A new maintenance building is being constructed because the food bank maintains its delivery trucks and forklifts.

Other improvements include more parking space around the building and such green efforts as a new HVAC system, more insulation — the building was constructed in 1981 — and more energy-efficient lighting in the warehouse. Kirkpatrick says she hopes this capital campaign will be able to satisfy the food bank’s needs for years to come, but she says she’s cautious.

“2001 was a turning point,” Kirkpatrick says. “This past decade was stunning, economically, for the worst. And it has created unprecedented demand for food from those who are desperate.

“When we launched our last capital campaign in 2001 to buy this building, we never thought we’d need to expand in just 10 years. So we’ve learned that we can never predict what our needs will be.”