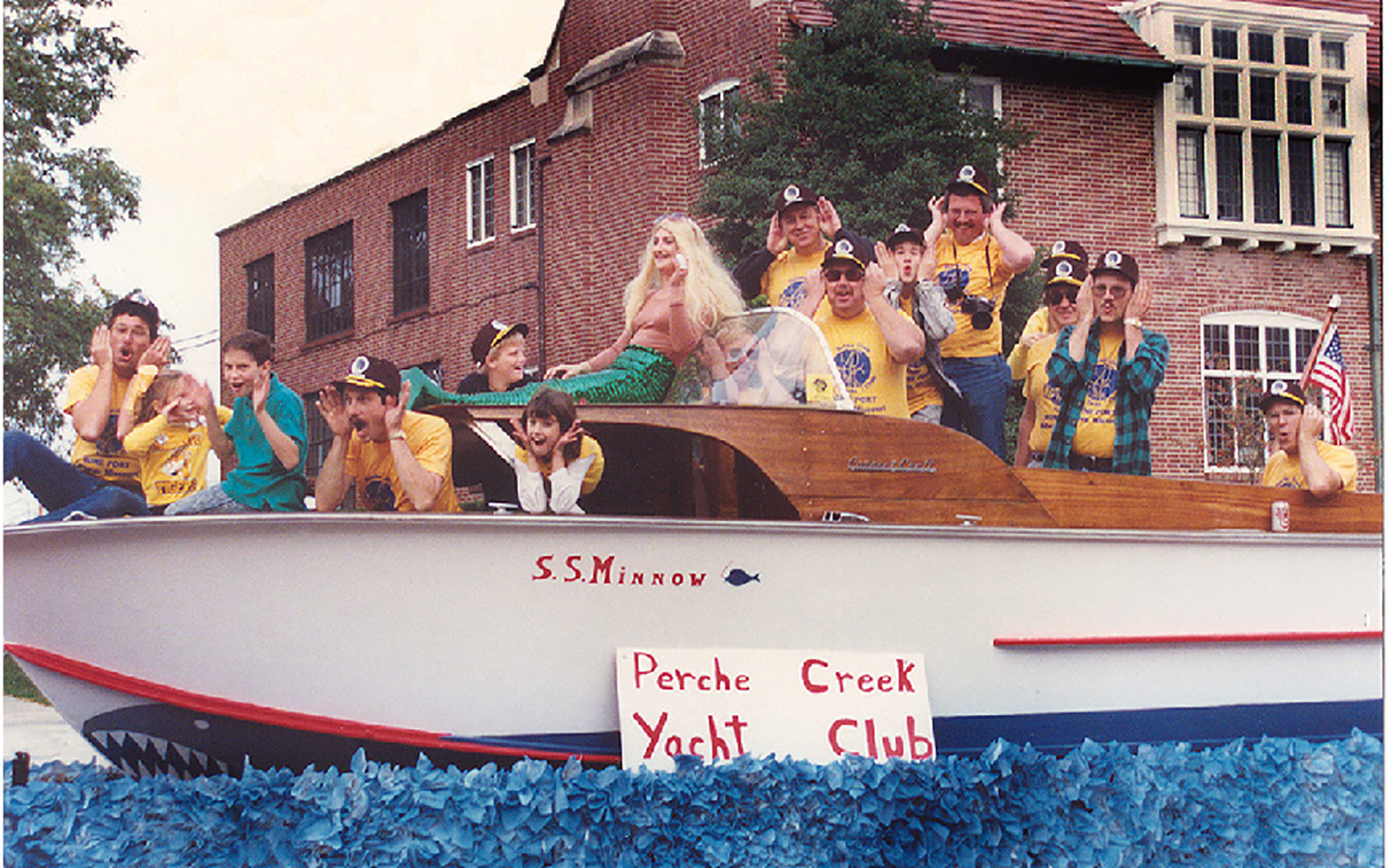 As the largest civic club in Boone County (unofficially, at least, with 1,370 members), the Perche Creek Yacht Club’s lack of appeal is its biggest appeal.

Its purpose: To have no purpose. Its first order of business: To have no business to tend to. The membership process is also impossibly simple and is based on two questions:

A pressing matter might occasionally creep into the conversation at the club’s Home Port, the Perche Creek Café off Highway 40 at Midway, during the 7 a.m. to 9 a.m. weekday coffee and breakfast sessions. A visitor can stir the group by asking about the correct pronunciation of “Missouri” — is it “ee” or “uh”? — or by dropping a figurative grenade with questions about the usefulness of certain politicians or political parties.

By the way, the group says the correct pronunciation is “Missour-ee.” (Of course, there’s a faction that also insists it’s “Missour-ah.”) As for politics, Commodore Gene Baumann says the group is “pretty ecumenical” with an unwritten rule to “not get too deep into politics.”

And that basically sums up 33 years of morning conversations since the Perche Creek Yacht Club was founded on Mother’s Day, May 14, 1989, with Gene, a Rocheport scribe and photographer, appointed as commodore, a title he has held for life because, as Member Number 1 Joe Burkart puts it, “Nobody else wants it.”

Members in all 50 states and all seven continents

Joe has been the rear admiral since the start. Fellow founding member Bob Green, who “activated his eternal status” in 2019, is the forever vice admiral. Joe explains there was also an “admiral of rears,” and that Gene is the top dog because “he’s in charge of the commode door,” adding, “See how seriously we take things?”

Gene, whose business card features a cleverly Photoshopped submarine surfacing in Perche Creek, is as laid back and unpretentious as the group. Noting that the club’s membership represents all 50 states, all seven continents, one U.S. territory, and 27 countries with 1,370 members in all, there are “many of whom will admit their association with PCYC.” He adds, “It’s to your honor that someone will admit to being your sponsor.”

“We make it look like so much fun that they can’t resist,” Gene says. Two or three members from the “in memoriam” dearly departed list have even mentioned their association with the club in their obituaries. Incidentally, the in-memoriam board on display at the café recently eclipsed 100 and stood at 101 on December 15. But was the no-purpose-club blamed for their demise?

“Not that we’re aware of,” Gene deadpans.

“If you can find another organization in Boone County with that many members, let me know,” he says.

While the PCYC is a perfect mix of tongue-in-cheek zingers and home-spun authenticity, don’t let the do-nothing moniker fool you. As the founding sponsor of the Cow Patty Bingo and stump speaking fundraiser at the Midway Little General Store, where the club was born, PCYC raised more than $100,000 through the years for The Food Bank of Central and Northeast Missouri. The club recently bequeathed the cow patty tradition to the Midway Optimist Club.

So where did the Perche Creek Yacht Club come from and why did it get started? One morning as Joe, Gene, Bob, and others stood having morning coffee in the aisles at Little General, Joe mentioned his familiarity with the River Des Peres Yacht Club in St. Louis County, where Joe spent nine years as a mounted park ranger. He and Bob agreed that a yacht club sounded like a good idea and Gene took that random seed of thought and ran with it.

“In 24 hours — the very next day,” Joe says, “he showed up and said, ‘Here, look at this,’” with Gene displaying the club’s original logo and a sheet of bylaws. “All I did was think it would be a fun thing to do. It turned out to be a lot of work for him.” Joe calls Gene “the creative genius behind the organization.”

“Anybody who can put a submarine in Perche Creek can do a lot,” says Keith Andersen, who became a PCYCer in August 2020.

“And it changed your life,” Joe insisted.

“Let’s go with that,” Keith replied, not trying too hard to hide a smile. “It’s good men having a good time. It’s not complicated.”

Joe tells the story about the club’s earliest days when the guys crowded around the end of the store aisles and one morning a woman rushed in, deftly grabbed a can of hair spray from a shelf, doused her hair, snapped the cap back on, and replaced the item on the shelf. Then she lit a cigarette, and her hair went up in flames.

Uh, watch where you step!

Gene certainly has the chops for creativity and leadership. He was the director of communications services for Shelter Insurance from 1962 to 2002, managing communications functions, including print advertising, publications, and photography. After retiring, Gene provided communication coordination for various political candidates, mostly county offices, working “both sides of the fence.”

He was always easy to spot at Cow Patty Bingo with a camera around his neck. The bright gold PCYC member t-shirt was also a dead giveaway.

The fundraiser began in 1991 with an evening event. A corral was set up on the lawn and part of the parking lot at Little General to create a giant bingo board with 100 squares, which were sold for $5 each. A dairy cow was released into the corral and wherever she, um, “deposited” determined the winner. Long-time PCYC member Bill Clark was usually the referee, with a keen eye to make a ruling when more than one square was the target of a plop.

The square with the most patty was the winner.

Clark described the tradition thusly: “Five boards are played on Bingo Day — unless constipation attacks the cow herd. Winners take $100 out of the $500 board sale but are shamed into returning the money to the food bank, thus ensuring at least $2,500 for the annual day of poop.”

Along the way, Cow Patty Bingo added an auction of pies — actual fruit pies, for human consumption — and 4-H or FFA lambs, though the animals are typically returned to their young owners after being “sold” a few times to boost the fundraising total.

“You can’t win if you’re not a winner of the Yacht Club,” he adds. Perhaps not coincidentally, the club grew from 990 to 1,089 members in 2012, a contentious election year.

New members will quickly understand that the club doesn’t take itself too seriously. Gene’s welcome letter makes that clear.

“You will find here a pulse of the community. It may not sound like a normal pulse, but its irregular rhythm will enlighten you on a variety of matters …

“I apologize for any stress you may have suffered while our membership committee evaluated your application. I’m pleased to report that your acceptance was very nearly unanimous.”

“With the stated purpose that ‘the highest purpose is to have no purpose,’ it should be obvious that the club plans no long list of activities or programs other than to pay respect to Perche Creek as Boone County’s preeminent waterway, and to get together to enjoy, cajole and cast aspersions on members and nonmembers alike. Public figures are favorite targets.”

“Our preamble describes us as a facility for sharing the intelligence of carefully selected individuals. Part of that selection process is whether or not the individual is willing to invest $20 in an enterprise whose purpose is to have no purpose.”

That “no purpose” aim is possibly responsible for people leaving other clubs to join PCYC, Joe says in a-friend-told-me-so tone, adding, “There were fewer requests for time and projects.”

Gene says that tracing the club’s year-to-year growth is challenging because in the early days, “We really didn’t keep track of dates … because we didn’t really expect it to go anywhere.” As Gene checks the official record book, which is kept semi-securely in a not-exactly-undisclosed location at the café, no one at the table seems to mind or monitor his recordkeeping. Joe says there’s a simple explanation for that: “If he’s doing it, we don’t have to.”

The newest member, a woman from the state of California, listed Margueritta Street in her address, which had Gene doing a double take of double-checking to confirm. It’s legit, he says. It reminded him of the time a woman joined some years back around Christmastime. Her name? Holly Bush. Also legit, Gene says.

The club’s newest in-person member recently handed Gene a membership form and a $20 bill, then asked, “Isn’t there a vote?” Kenny Andersen pointed to the legal tender on the table and said, “There’s your vote.”

New members receive a PCYC cap, a t-shirt, an $8 voucher for breakfast at Perche Creek Café, a certificate — suitable for framing, of course —and a laminated membership card.

“If your yacht sinks, it’ll be okay,” Gene explained.

Even at the peak of laughter and jokes, the conversation can take on an approachable, down-to-earth tone. Joe is proud of his status as Member Number 1 and he recently introduced himself to a prospective member as “Vernon Goldfarb,” quickly following with his verdict of the club.

“First and foremost, they’re neighbors and friends,” he said. His farm is just a short drive from Home Port at the café. Some years back, a straight-line wind blew down a barn that trapped some of his animals. As Joe and family members used chainsaws to get their miniature horses to safety, word had already spread that help was needed. He says the picture that unfolded resembled the long line of cars reminiscent of the final scene in the movie Field of Dreams.

“That’s what my driveway looked like,” he said, pointing to other men around the table. “Help was there in no time.” Most of his animals were saved.

Home Port is active from 7-9 a.m. weekday mornings at the big table by the counter in Perche Creek Café at the Midway Little General Store.

Perche Creek has been witness to the development of Boone County since the Corps of Discovery passed its entry into the Missouri River on June 6, 1804.

Captain Clark interpreted the French Boatmens’ name for the high, craggy cliff’s split rock, which marked the mouth of the creek, as Roche Percee, which has evolved into Perche, (pronounced PUR-shi) over the years.

The Creek has been traced to its origin in southern Randolph County and winds its way nearly the full length of Boone County to the Missouri River downstream from McBaine.

New members are alerted that there might be a discrepancy between their member number and the total number of members on the “memberlist ship.” The difference applies only to member numbers 667 and above. According to the notice:

“The reason for this is that we have decided to keep the number 666 vacant to preclude any concern by any member who might have been assigned the Sign of the Beast as defined in Revelations 13:16-18 and 14:9-11. We reserve the privilege of assigning the number if an appropriate member comes along. Until then, it will remain vacant.”

In a recent perusal of membership records, Gene says he discovered that number 666 was assigned to Osama bin Laden, and it was the former al-Qaeda leader’s act of sending in a membership application that allowed authorities to find him.

Well, that may or may not be true, but it’s a good story. And Gene confirms, “He is not a member.”