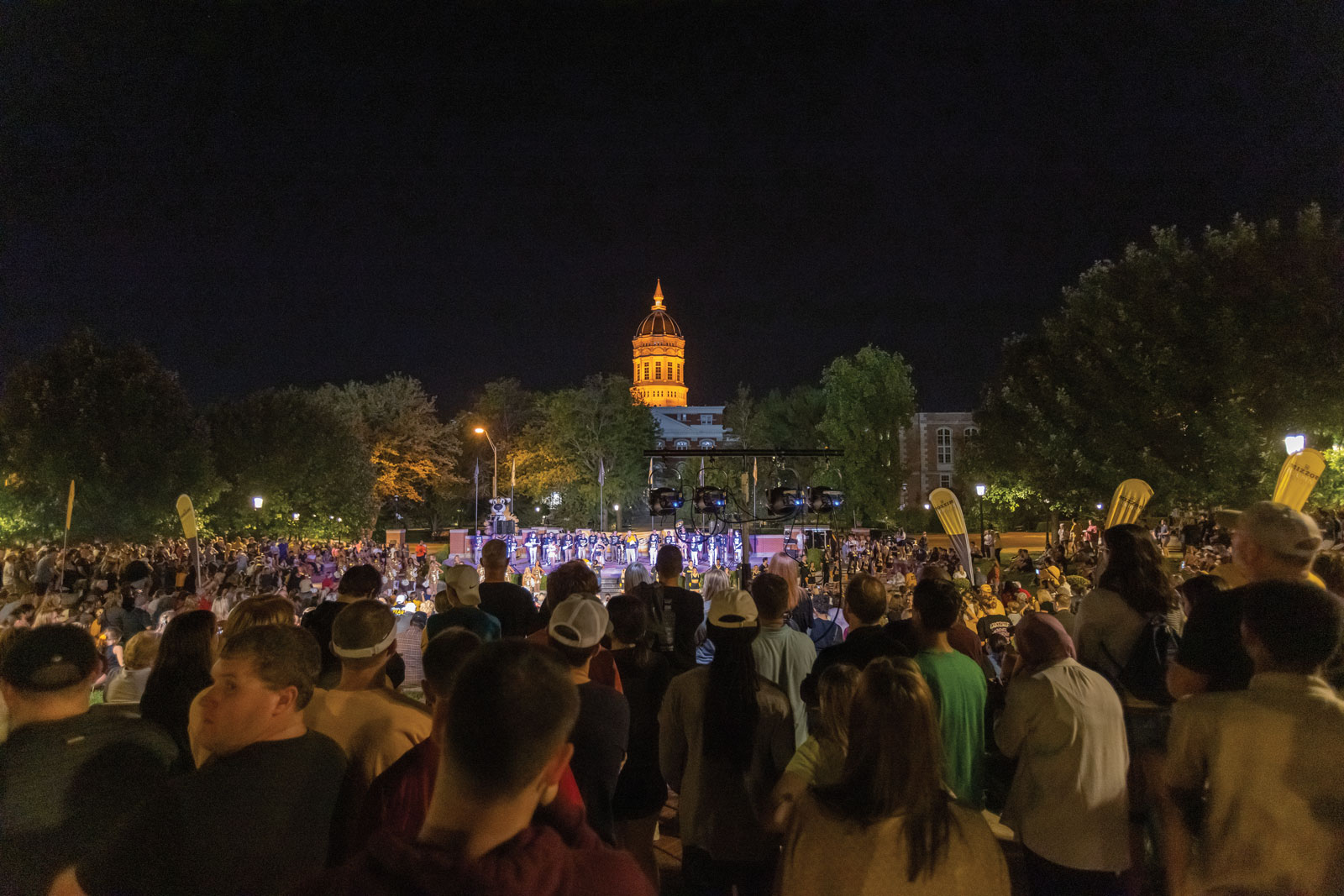 The story of Mizzou Homecoming.

From a freshman’s first steps on campus to their walk across the stage at graduation, tradition guides every part of the MU experience. But how do pivotal traditions like Homecoming, Tiger Walk, and Senior Send-Offs begin? According to Todd McCubbin, executive director of the Mizzou Alumni Association, when you do something once and do it well, you’re bound to create something special. He said, “While the professors, the majors, the presidents and the chancellors may change, those traditions and the history of the place – they all tie that bind.” These shared experiences create a special connection between MU students and alum.

Homecoming is one of MU’s most widely celebrated traditions, and the university is known to be the first to celebrate it. The Homecoming tradition dates back to 1911 when Chester Brewer invited alumni near and far to “come home” for the Missouri-Kansas football game. Chester said, “As I remember, Missouri was the first school to sponsor the idea of an annual reunion on the day of some important football game.” With over 9,000 attendees at the original Homecoming celebration, it was an overwhelming success that has only grown since.

The pride in being the first inspires all the traditions that accompany Homecoming. Todd said, “At Mizzou, it’s all about the students. You get to participate in Homecoming activities in a variety of different ways as a student, and then on Homecoming weekend, alum want to come back to experience it because they’ve felt that energy and magic at campus decorations, the parade and the football game.”

The 2022 Homecoming theme is “Paint the Town Gold” to commemorate golden memories made at MU. This year, the Tigers will face Vanderbilt on Saturday, October 22, and MU alum from all over the country will return once again to celebrate the MU holiday.

Every year, an estimated 20,000-plus students and alumni walk through “Greek Town” for one of the university’s most popular Homecoming traditions – campus decorations. Fraternities and sorority pairings create large, free-standing boards that are painted and pomped to reflect the annual theme. The pairings also perform skits to engage the audience and bring their boards to life.

Todd said, “Campus decorations are the first stop at the reunion event. It’s where the weekend gets started for a lot of people coming back into town. It’s great for kids and it’s great for families. You see a lot of people meeting up with people they haven’t seen in a long time.”

With 150 floats and about 30,000 attendees, the Homecoming parade is the perfect kickoff to game day. It brings everybody to the heart of the MU campus for some family-friendly fun before heading to the stadium.

“I like the moment at the beginning when Marching Mizzou starts taking the first strides down Rollins,” said Todd. “And every year, I watch the first 20-30 entries, then I walk backward through the parade route. At University and Ninth Street, I cut through the quad. Nobody is out there at that time, and you’re in this beautiful historic place where you can hear the buzz and the fight song from the band bouncing off the buildings. It’s just so cool.”

MU has played an array of intercollegiate opponents for what’s become the biggest game of the year. Todd said, “The game is the culmination of the weekend, it’s a fun place to go. It’s where the spirit comes alive.”

A Homecoming weekend, however, wouldn’t be complete without a king and queen. Each year, students apply or are nominated by their various clubs and campus organizations to be a part of the Homecoming Court. The royalty process is no small undertaking – it involves an application and a multi-interview process where students undergo three levels of judging. Every applicant submits a written portion. Then, the top 30 move on to a personal interview with select faculty and staff. Finally, the top-10 students represent the Homecoming Court, and a student vote appoints the Homecoming King and Queen.

Alex Holley, a member of Alpha Kappa Alpha Sorority, Incorporated and a life member of the Mizzou Alumni Association, was Homecoming Queen in 2010. She felt that being a part of the Homecoming tradition was an irreplaceable experience. “I feel honored and blessed to have been Homecoming Queen, representing the student body and my sorority. To be on the field and share that moment with the thousands of people who were there was a surreal experience. It will always be one of the highlights of my life. It’s not every day that you get crowned Queen where Homecoming originated!”

Alex said that nearly 15 years later, she still keeps in touch with the other alum who were by her side on Homecoming Court. She attributes this lasting relationship to MU’s strong foundation in tradition. She said, “I like how they use elements of tradition to guide you along – you have something in common with so many people who have gone to Mizzou and done the same thing. It makes the experience that much more special.”

The list of Homecoming traditions doesn’t end there. The celebrations also include a blood drive, talent and dance competitions, the “Decorate the District” event, a food drive and more – all contributing to the true spirit of Homecoming.

The blood drive is one of the largest student-run varieties in the United States each year. Students and other community members can donate on campus, while non-COMO residents can donate at satellite locations – all benefitting the same cause and representing the black and gold.

The talent and dance competitions take place during the week leading up to Homecoming. Each of the Greek pairings make their way to Jesse Hall to perform original dances and skits related to their assigned theme for an audience of students, parents and alum.

The “Decorate the District” event occurs the Thursday night before Homecoming weekend when the student body, including clubs and organizations, come together to paint Mizzou-inspired designs on windows of the downtown restaurants and storefronts.

Finally, the food drive (coined as the “Tiger Food Fight”) brings the Mizzou community together to contribute to the Food Bank for Central and Northeast Missouri, which also benefits Tiger Pantry on campus.

Coming Home for Years to Come

MU Homecoming is a shared experience that students, both past and present, hold close to their hearts. The weekend festivities have evolved over the years to become the great celebration it is today, and it’ll always be an essential element of the MU experience. Todd said, “The way our staff, students and leadership on campus are able to evolve a great tradition has kept it strong and vibrant.”

At MU, the word “Homecoming”  symbolizes tradition, history, reunion and the celebration of collective memories of thousands of people — because everyone has a MU story.