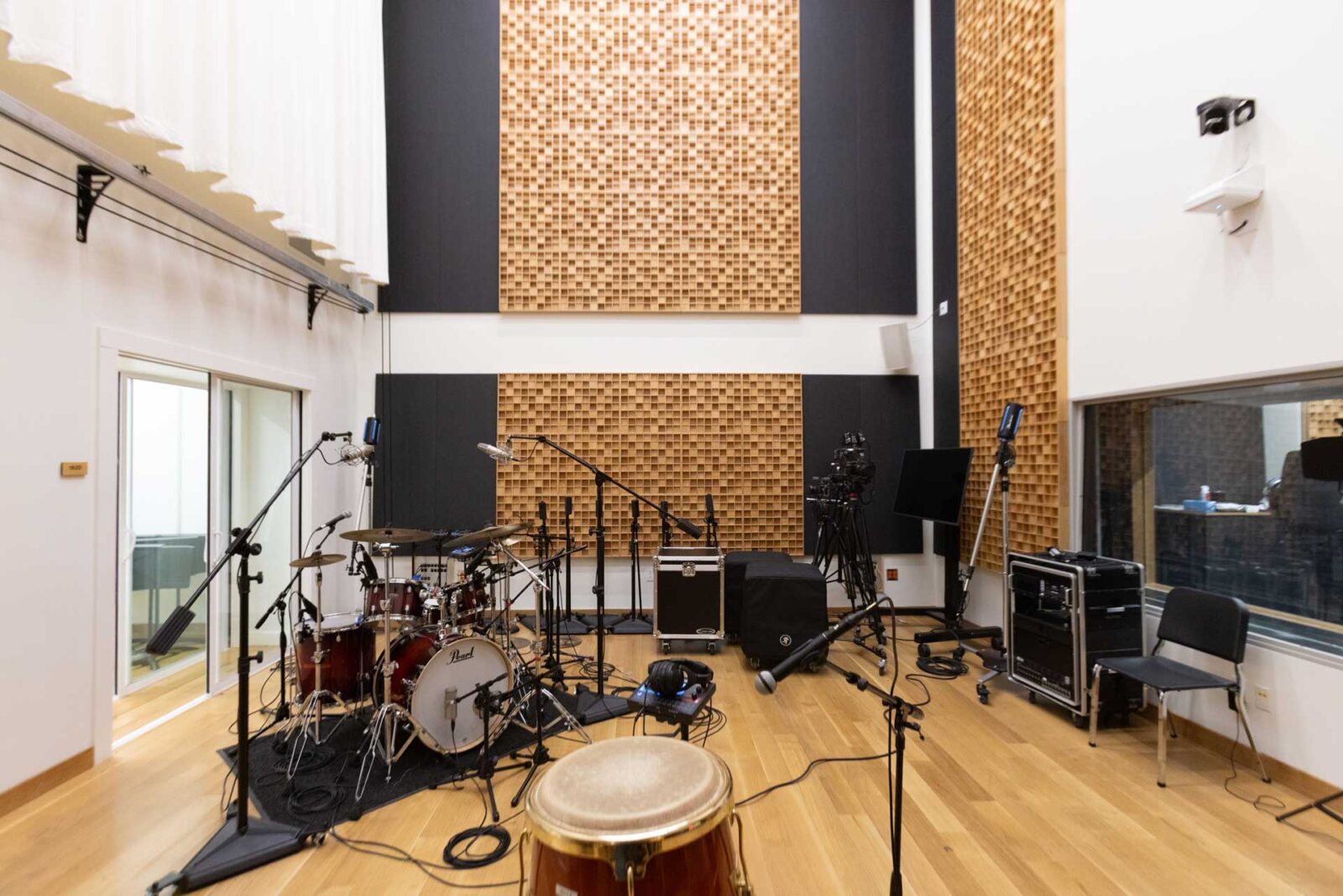 An initiative focused on cultivating the musicians of today.

“When the lights dim, the conductor lowers their arms for the first downbeat of music, and the very first sound of music starts — when that moment hits, I can hear in that very first note all the work, time, and effort put into that one moment. The culmination of everything I was working towards,” Jacob Gotlib, managing director of the Mizzou New Music Initiative, says.

In February 2020, the MU School of Music transitioned from being a school split between several buildings across campus to one that had finally found a home: The Sinquefield Music Center. The building now serves as a home not just for MU School of Music students, but for people across the world as they participate in various programs as a part of the Mizzou New Music Initiative.

“The goal is to make the university and the state of Missouri a center for composition and the performance of new music,” Jacob says. “All of our programs are designed to help students throughout the state either write new music or perform music by living composers.”

Jacob stepped into the role of managing director in August of 2016.

“I’ve been in the world of contemporary music composers, people who are practicing and defining what that means, for a while now,” he says. “I have cultivated this passion for doing things behind the scenes, of creating the infrastructure for which this music can thrive, and that’s exactly what I’m doing in this managing director role.”

The MNMI hosts programs and competitions for various ages, starting as young as kindergarten-age. Their biggest competition is the Mizzou International Composers Festival, for which internationally renowned composers come to MU’s campus the last week of July each year.

“Composers from all over the world submit portfolios to apply to participate in this festival,” Jacob explains. “This year, we have 530 applicants and only five slots open. It is becoming an increasingly well-known competition internationally.”

This year alone, MNMI received submissions from 49 countries and from every continent except Antarctica. Applicants submit a portfolio containing three contrasting pieces with scores and recordings. A panel consisting of composition faculty within Mizzou’s School of Music and various composers from around the world narrow down the original submissions from 530 to 40 and then down to five.

“We don’t want to be biased and only have our faculty review submissions,” Jacob says. “We bring in ideas, perspective, and expertise from around the world.”

Of the five winners, one spot is always reserved for an MU student. In addition to composers coming to campus to perform, the school also brings in guest composers at the top of the field to come and mentor the five selected winners.

Other programs include the Missouri Composers Project, Sinquefield Composition Prize, Missouri Summer Composition Institute, and the Creating New Music Project, or COMP, which began in 2006 as the very first program of MNMI.

COMP is a competition for kindergarten through 12th grade students throughout the state of Missouri. Students can write and submit original work of any genre, and the winner receives a cash prize for both themselves and their school. Additionally, the winner is invited to campus to perform their work.

“It is a pretty big program because it encourages music making in a creative way,” Jacob says. “So often, a kid’s music education revolves around performance of pre-existing music. The first contact kids have with music is typically instrument lessons — piano, violin, flute, whatever they play — and they learn to play music written by other composers, sometimes the greats. But here, the point of this program is to encourage them to be on the other side, the one writing the music.”

The Missouri Summer Composition Institute is an intensive composition summer camp for high school students throughout the state of Missouri. Sixteen students are selected to come to campus for a week, at no cost, with the goal of writing a brand new piece from scratch. At the end of the week, students get their work performed and recorded by a professional new music ensemble.

“During those five days they are working and collaborating intensely,” Jacob explains, “as well as having lessons with faculty, coaching performers, and preparing to present. It is a really fun and intense experience.”

Many kids who are writing and composing their own music don’t have a community at their school with the same interests. This camp is just one way the initiative is cultivating a community passionate about music, even at a young age.

“To be able to have all of them together on campus really engineers a sense of community and makes them feel like they aren’t alone — there are people like them,” Jacob says. “I’ve watched kids become completely transformed by their experience during just one week. Just watching what happens when these kids write a piece from scratch, watching it get realized and seeing what happens . . . the look on their face when what they write finally gets realized by professional musicians — it is life changing. Astounding.”

The past couple of years, the program has been held online instead of on campus.

“It was still a terrific experience, but not quite the same,” Jacob says. “We’re hopeful to have everyone stay on campus again.”

MNMI is not only cultivating a community, but it is actively encouraging and investing in composers, practitioners, and performers who specialize in the music of today.

“We are devoted to cultivating the forefront of what the future of music should be,” Jacob says. “That means encouraging experimentation and encouraging new ways of thinking, new ways of listening, and new definitions of what music can be.”

The programs that make up MNMI all work together to highlight the importance of making this work a part of basic music education.

“The idea that composing and being creative with music can start at the same time as learning to play an instrument has a huge impact. It is a huge influence in how students think about music,” Jacob says. “Every composer that I’ve talked to, who I’ve mentioned this program to, their jaw drops. And they always say they wish they had programs like these when they were kids.”

While MNMI cultivates composers and performers, it also brings an exciting landscape to Columbia with the International Composers Festival. It is an impactful experience for both the performers and the audience.

“People in Columbia can experience world-class music-making by some of the most important names in the field, all right here in our town,” Jacob says.

MNMI brings together a diverse array of programs that position the MU as the leading center for composition and new music. Over the past 12 years, the initiative has aided in the creation of over 550 new pieces of music.

“The Sinquefields have always been interested in music, compositions, and cultivating students who explore composition and contemporary music,” Jacob explains. “It got to a point where the facilities were limiting the extent to which we could be the kind of world-class institution we all wanted to be.”

The Sinquefield’s gave $10 million — the largest arts gift ever to MU — in 2015 to go towards the construction of the music center.

Plans to build a new music center really started in 1965, when the music program outgrew the fine arts building, which was built in 1960. The Sinquefields gift in 2015 helped turn a dream into a reality.

The new music center has various features that support MU music students at every stage of their education.

“All the rooms in the building were designed specifically for music-making, “Julia Gaines, MU School of Music director, explains. “Practice rooms and rehearsal rooms have angled walls so the sound can bounce off the walls in all directions. Straight walls in a room where music is going to be made leads to a very limited acoustic experience. Our rooms were designed for a premium acoustic experience for musicians, and this makes it easier to practice and rehearse for longer amounts of time.”

“We currently use our studio for all recordings anywhere in the Sinquefield Music Center and Fine Arts Building,” Julia says. “We hope to expand this out to include Jesse Auditorium and the Missouri Theatre in the future.”

Perhaps most importantly, the new building was built with every student in mind. “We also have a lactation room,” Julia says. “I know this is only significant to a few people, but as someone who had to deal with this with two babies, I am very happy about this. I love seeing our moms —faculty, staff, and students — go in and out of there.”

Even with all the features of the new building, the biggest highlight is encouraging interaction between students and faculty.

“When we were separated out between four to five buildings, it was difficult to build a community atmosphere, “Julia says. “But now that we are down to two, it has really helped both the faculty and the students see each other more, which inevitably leads to collaboration and mentorship.”