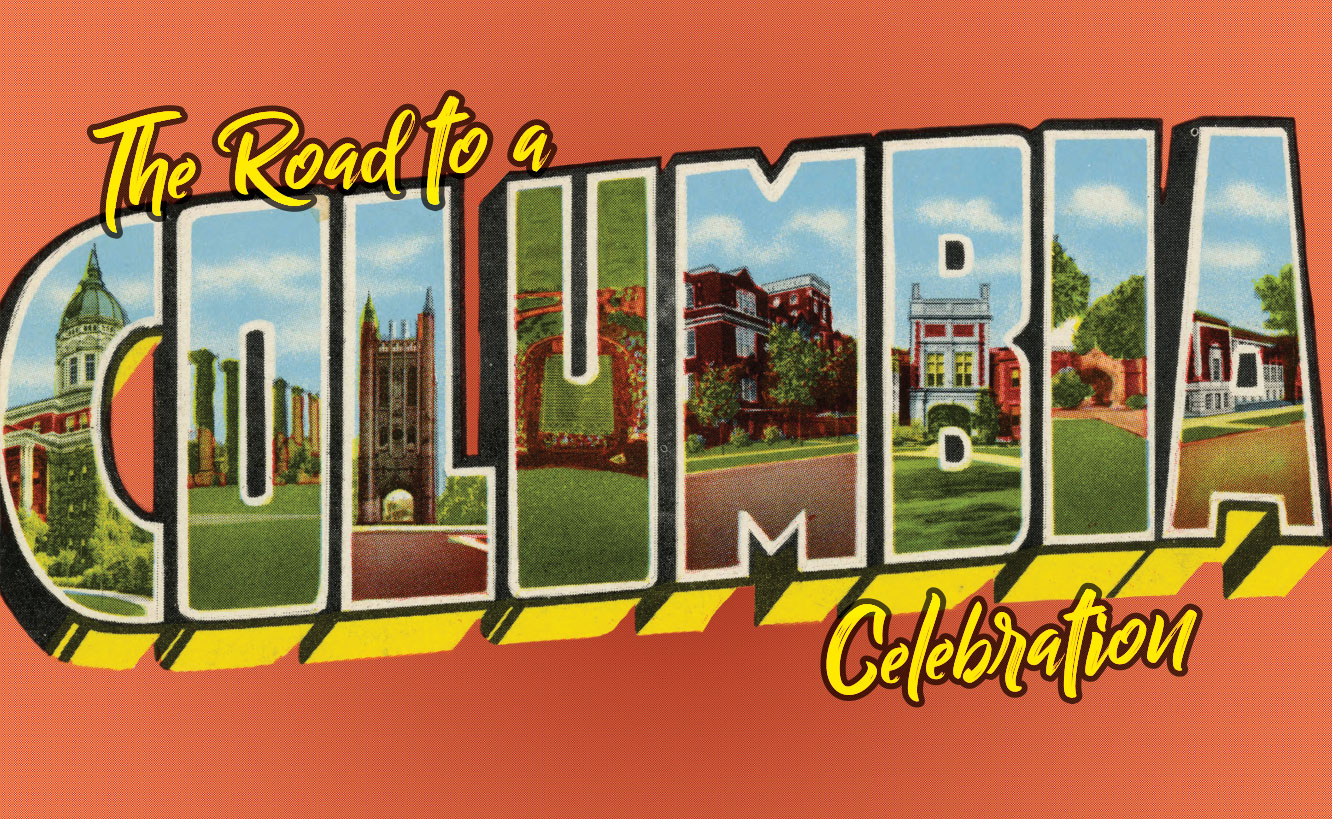 The CoMo 200 Task Force plans a celebration of the centuries.

The CoMo 200 Bicentennial Task Force, appointed by Mayor Brian Treece in early 2018, was tasked with a huge job — ensuring that Columbia’s bicentennial was a memorable and historical celebration for the city. As they broke into various working groups and began brainstorming and planning a wide range of community projects and activities to celebrate 200 years of Columbia’s history, excitement and anticipation grew. Then, March 2020 hit, and the COVID-19 pandemic forced the task force to regroup and reimagine their plans.

“Our mayor is very much a lover of our community and the history of Columbia, and he was very intentional in selecting task force members who are true fans of our community,” says Megan McConachie, strategic communications manager for the Columbia Convention and Visitors Bureau. “When the mayor made those choices, it meant that we would be able to adapt and make sure our community had the bicentennial that it deserves. None of us could have predicted what would happen in 2020, but we have been able to stay strong as a task force and make sure the outcome was great.”

Although plans changed and, often, changed again, task force chair Dave Lineberry says the dedicated group never wavered from the job with which they were tasked.

“It wasn’t always clear what we were headed towards, whether it would be a fall of virtual events or a summer of in-person events, but what has kept us going is that everyone at the table seemed to have their eye on the larger prize, which was planning a bicentennial to include as many people who are interested,” Dave says. “Then, we’ll do what we have to do. We’ll adapt. But everyone was forward-facing, and we viewed it as just hurdles to deal with.”

The CoMo 200 Bicentennial Task Force’s 13 members have been meeting monthly for multiple years now. Though the pandemic and resulting shutdowns forced the group to forgo meetings for a couple months in 2020, they were quickly back up and running using Zoom meetings and meeting in large spaces.

“We are a broad cross section of people and we have many members who are in an at-risk category or are caretakers for those at risk, so we’ve had to be careful, but the work continued,” Dave says.

While behind the scenes, planning continued to move forward, the pandemic did create unforeseen challenges for the task force. The inability to travel around the city to speak with potential donors and partners meant that word-of-mouth buzz was slow to spread. That was especially important when it came to raising funds for CoMo 200’s capstone project, the Flat Branch Park redevelopment, which will reclaim the park space and make it usable to Columbians for generations to come.

“Usually when a project is well-identified and defined, you enter a process of quiet fundraising where you start sharing the word about the project, networking around to see who can support the project, and working to attract large seed gifts from banks and large corporations,” Dave says. “We couldn’t speak to groups because it wasn’t safe to ask people to come together, and groups like banks, who are historically seed gift supporters, were wary because the economy is not 100% clear.”

Although the capital campaign for the Flat Branch Park Extension experienced unprecedented challenges, Dave says the task force has been able to move the project forward by attracting support from in-kind donors for services like hardscaping, soil remediation, and engineering.

The task force has also relied upon the expertise and generosity of committed volunteers as well as support from the Columbia Convention and Visitors Bureau, the city manager’s office, and the Columbia Parks and Recreation Department.

“This is a collaborative effort, and we could not do what we are doing without all the great help of people who work with the city,” Dave says. “It was a challenge, but our volunteers stuck with it and our city employees stuck with it, and we are thankful that as the summer comes, we will have a lot of things to do to celebrate our bicentennial.”

Instead of the original vision of a year’s worth of bicentennial events and celebrations, CoMo 200 events will now be centered around Fourth of July weekend. Highlights include a health fair, the Parley P. Pratt 5K event, tours of the African American Heritage Trail guided by school-age docents, concerts, family events, and more.

“There won’t be any CoMo 200 events that pull people together in ways that aren’t safe,” Dave says. “We’ve planned as many events as we could to be broadcast virtually, and we do have some alternative plans should things go backwards. We aren’t going to risk anyone’s health to celebrate the bicentennial, and I want people of all ages and health to benefit from our work. Inclusion means planning for people who aren’t vaccinated and might be at risk.”

In addition to celebrations and events, the CoMo 200 Task Force is also working to document Columbia’s history for the Boone County Historical Society and the Missouri State Archives. Residents can submit their own story about living or working in Columbia through the CoMo 200 website. Those stories and experiences will then serve as a reference for future generations.

“We want to hear from as many people as possible about what Columbia means to them, what their past looks like, what they hope for their future,” Dave says. “Those are things we can share leading up to the events, but can also archive as part of the commemoration of our bicentennial. You don’t have to be a historian or a writer or even an adult. It could be an organization or a business history. It would be interesting to take the larger view — in the last 100 years, what kinds of businesses have been growth businesses and which haven’t been?”

For those who prefer speaking over writing, Megan says there will be other opportunities to share stories in celebration of the bicentennial.

Columbia will also showcase visual cues that a celebration is underway. In May, downtown Columbia was adorned with banners on light posts, and the task force has been working with downtown businesses to ensure that all store fronts will be decorated for Fourth of July weekend. In addition to other CoMo 200 swag, the task force will publish a commemorative journal featuring 13 winning posters from a student poster contest.

“It really is an immersive experience,” Megan says. “We are working to make everything bicentennial focused.”

As bicentennial buzz spreads throughout Columbia, more ideas have come to the table, and both Dave and Megan say that all ideas are welcome and encouraged. The schedule is not yet full or complete, so organizations, businesses, or individuals with plans or ideas are encouraged to present them to the task force.

“[To] anybody who has an idea that you’d like to get into the celebration, it’s not too late to have that conversation, so bring it forward,” Megan says. “We’ve had such thoughtful people bring such thoughtful ideas forward. We aren’t about telling people how to observe the bicentennial — we are about helping people celebrate in a way that is meaningful to them.”

Dave says the task force invites any organization or business already planning an event to give it some bicentennial flair, much like Logboat Brewing Co. did with their CoMo 200 blonde ale, brewed with honey from Boone County.

“There will likely be other groups that want to put something on that is related to the bicentennial, and we’re there to support them and cheer them on and promote it to the community,” he says. “We are welcoming any organization that wants to recognize that it’s the bicentennial year, and we will share our logo.”

While the task force has been working for more than three years to give Columbia the best bicentennial celebration possible, there are plenty of opportunities for interested residents to join in the planning. The task force meets the fourth Thursday of each month, and both Dave and Megan welcome residents to attend, find out what’s going on, and jump in where they’d like to lend support.

“Other people come to the table with a skill or interest and we direct them to the working group where they can have an impact,” Dave says. “Anybody can help. You can help by coming to an event, or by drinking CoMo 200 beer. We planned a bicentennial that would embrace many different lifestyles in Columbia, and we invite everyone to think about the past, think about the future, and take in some of these free events to benefit themselves.”

Maplewood Barn Community Theatre
To commemorate the Missouri Bicentennial, Maplewood Barn Community Theatre will produce four plays in 2021 with a Missouri theme, featuring the work of a Missouri playwright, Missouri subject matter, or a Missouri setting. The four shows that they’ve selected will showcase the wonderful talent of Missouri playwrights, the exciting history and stories of Missouri’s culture and heritage, and the majestic landscapes of this beautiful state.

Odyssey Chamber Music Series presents COMO Bicentennial: July 2
A special summer concert featuring an array of virtuosic programs to reflect on this monumental occasion, featuring mostly Columbia-based musicians performing works by prominent composers of the past and the present, including the ever-popular Gershwin’s “Rhapsody in Blue.”

Mid-Mo Traditional Dancers Virtual Contra Dance: July 23
To celebrate the Columbia bicentennial, join a virtual event featuring local dance band 32 Bartenders and local caller Jim Thaxter, who will all be appearing in period costume, along with fellow MMTD caller Claire Baffaut, who will also speak briefly about the history of contra dancing and the history of the MMTD organization and dancing in Columbia.

A Century of Health Care