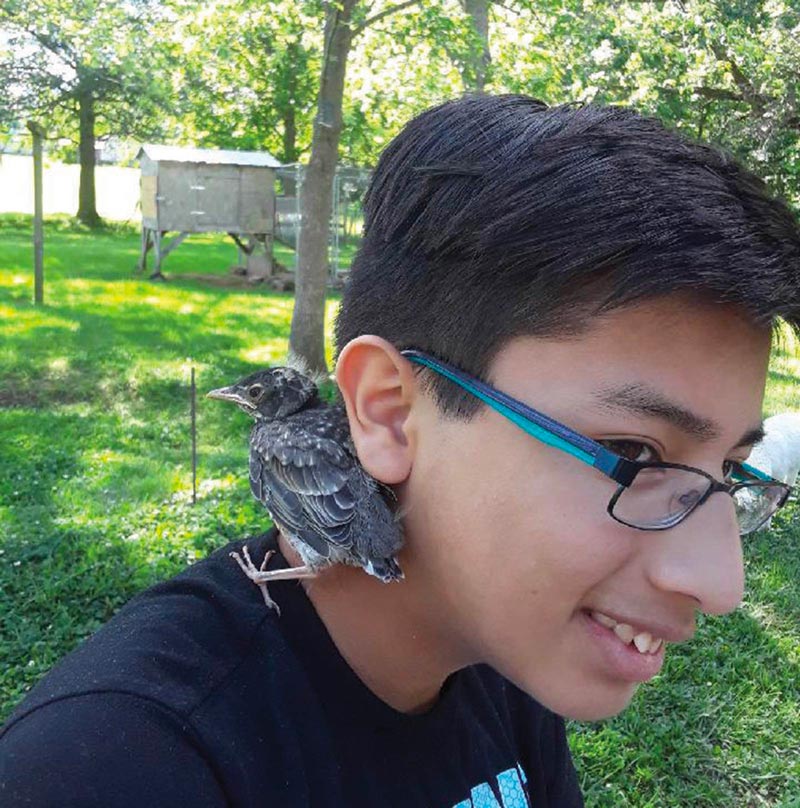 How Josiah Jainchill rescued and raised an orphaned robin.

After a harsh summer storm, Josiah, a teenager, found a shivering clump of feathers on his lawn. He became interested in it when it hopped away.

“I didn’t know quite what it was,” he says. “All I saw when I came up to it was a yellow beak, and then it opened up its mouth.”

The ball of feathers proved to be an abandoned robin Josiah later named “Texas.” With the aid of his older sister, Josiah smuggled Texas into his house, where he gave the robin worms and water with a syringe.

By the time his mother, Amy, discovered the guest in her home, Josiah says, “It was too late because we’d started feeding it.”

Though it can be difficult to raise an abandoned wild animal, Josiah doesn’t think it seemed hard in his situation.

“Mainly I fed her worms that I dug up in the garden,” he says, “But it would also eat fruit and soaked dog food.”

With the help of his family, Josiah nurtured Texas until she was ready to go outside for the first time. Josiah says, “I took her outside about the third day I had her, and I kept her in a flower pot until she grew more adventuresome and flew around the yard.”

Often, Josiah would do yard work while Texas sunned herself for hours under the plants in the flower pot. She soon got to the point of sleeping outside, but Josiah knew his temporary pet needed to learn how to fly if she was ever to return to the wild.

“I would pick her up and toss her, and she would fly away, and then I’d whistle for her, and she would come back,” he says. “She learned to fly that way. Every day she would gradually be able to fly higher and higher. After a couple of days, I started showing [Texas] the worms and putting them in the grass for her to find and eat. After that, every once in a while, I would see her digging for worms and other bugs in the ground.”

“God usually takes care of his animals, but this time he chose me to take care of one.”

As Texas grew more independent, Josiah admits that it made him feel a little sad. Still, he says, “I also knew it was a wild animal, and the best thing for it was to fly away.”

Eventually, Texas did break away from her adoptive family.

“For about the first two weeks when she began to fly, she would fly back when I whistled to her. About the next week after that, I noticed her getting a little more cautious towards my family,” Josiah says. “When they would come around, [she] would hop farther back or fly away. Before, she would have stayed there and waited for them to give her something to eat.”

Texas learned to wait for Josiah every morning on his back-porch, chirping to be fed. One morning, Josiah came out, and she wasn’t there. Josiah says she doesn’t come around anymore. “Not like she used to,” he explains. “We’ll see her perching on a branch, or she’ll fly by the windows, and we’ll be able to recognize her. I can recognize her by her whistle—it’s more of a high-pitched whistle.”

Despite losing his friend, Josiah doesn’t regret anything he’s done for her. He believes people should always save an orphaned bird if they have the chance, since abandoned birds are exposed to predators on the ground.

“God usually takes care of his animals,” Josiah says, “but this time he chose me to take care of one.”