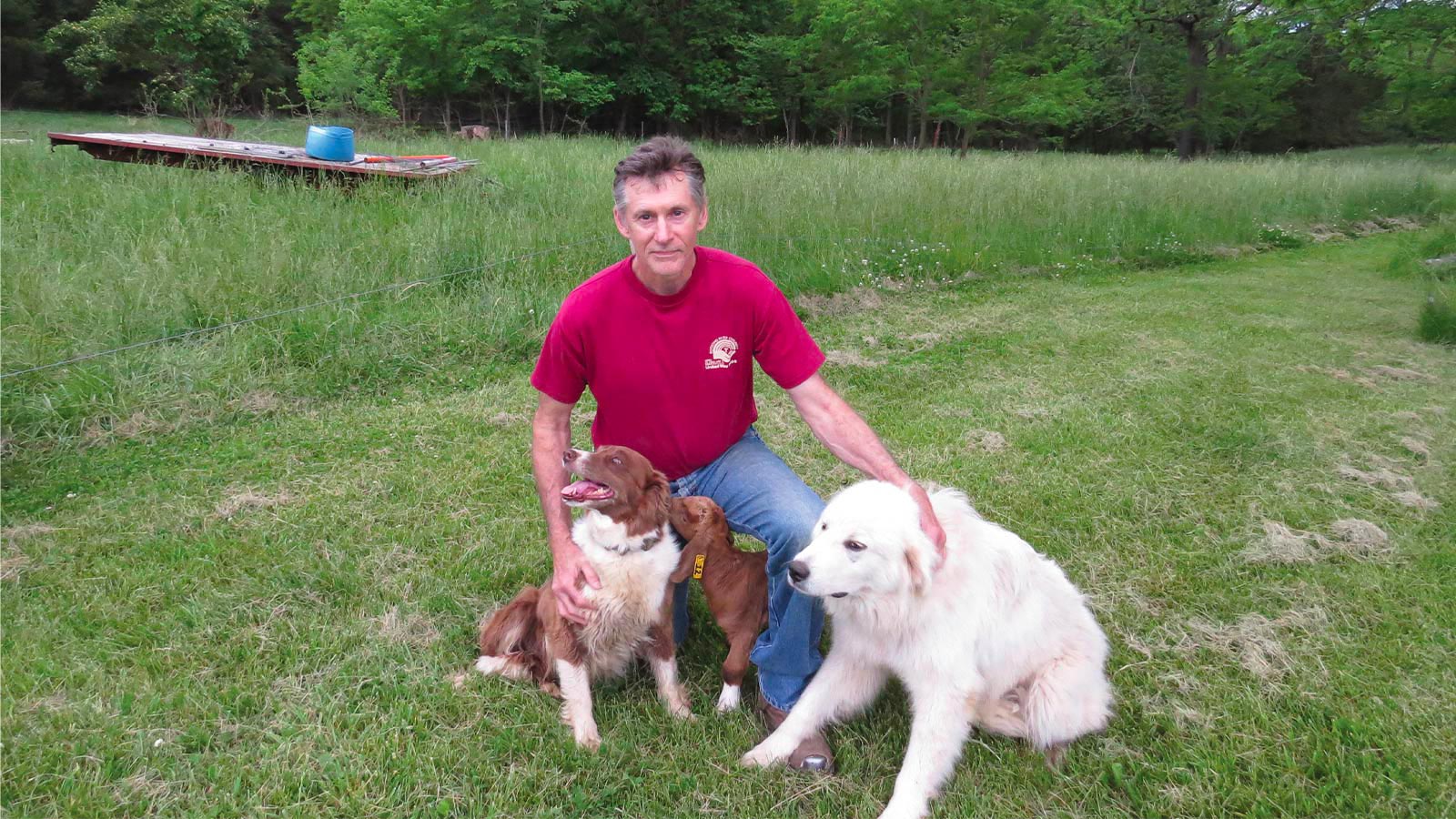 How a working dog makes a farmer’s life easier.

Most Columbians start their work day by grabbing their keys as they head out the door. However, when Ben Voeller heads out the door, he calls for a 12-year-old chocolate-colored border collie named Lacey.

Though Columbia is a thriving city, many farmers live in the countryside on the edges of city limits. Ben is one such farmer, and each day his job of herding obstinate Angus cattle and wily boer goats is made that much easier because Lacey works by his side.

As Ben moves his livestock to new grazing grounds, he calls on Lacey for help using commands such as “come by” to circle left, “push” to move forward, or “away” to circle right.

Ben says: “I might use her to push them out of an area or hold them in an area while I put out feed. Sometimes I will open a gate and drive through with a tractor, and she’ll watch the gate to keep anything from leaving that area. Border collies are primarily gathering dogs. They want to bring the stock to you, so it’s difficult to get her to keep them in the pen because now it’s her instinct to bring them to me. It was a fairly long process to get her where I could depend on her to do her job.”

When working with cattle, Lacey energetically bounds back and forth, chasing unruly young cows down and keeping them in a tight formation. Ben doesn’t believe his livestock operation is big enough for Lacey to add monetary value to his farm, but he admits that his life would be harder without her.

“In the middle of winter, [if] you’re going through the gate and if you have to get on and off, it’s a big help having her watch gates,” he explains.

Lacy watching gates is especially helpful to Ben when on the other side of the gate has a herd that could run out of the pasture while his back is turned. Still, occasionally, animals do escape.

“She is your friend, too, not just a dog that works.”

Ben says, “Probably the biggest help is having a few animals getting out and [her] gathering up stray animals that I would have otherwise had to get with my four-wheeler — that just doesn’t work well with a four-wheeler.”

“It just depends on [a farmer’s] budget,” Ben says. “It is all relative to how much help you feel the dog is to you. My operation is to the point where if I lost my dog, it would set me back. There are times where I’ve thought I would be better off without this dog, but most of the time, I think, ‘Boy! If I hadn’t had that dog, this would have really been a nuisance.’”

In addition to Lacey’s hard work, Ben appreciates the bond they have together.

“I think there are some that say [work dogs] are not pets. They’re working dogs, but that’s not the way I’ve treated them,” he says. “I think the more loyal the dog is, the more it looks up to you, the more it wants to work for you. Their instinct is to please. You can just see that by the way she’s looking up at you. She is your friend, too, not just a dog that works.”