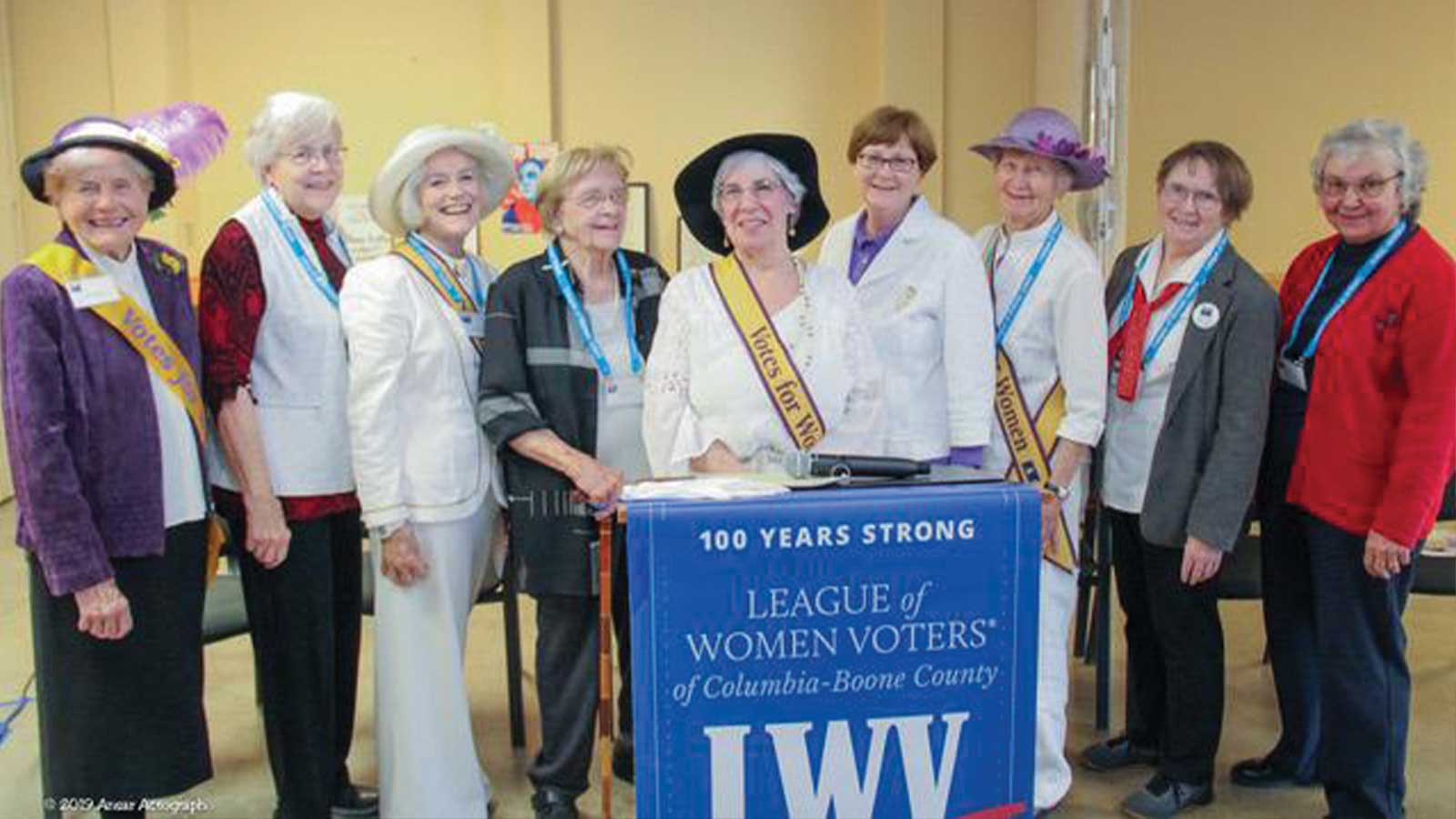 The League of Women Voters salutes 100 years of women’s rights and promoting people’s right to vote.

On August 18, 1920, after an almost 80-year struggle, the 19th amendment became part of the United States Constitution and women won the right to vote. But years before, on November 16, 1912, the League of Women Voters, or LWV, in Columbia was born, consisting of only 18 members. Since then, Columbia’s LWV has worked tirelessly to make sure citizens vote and are informed on the issues that affect their rights and government.

Former LWV president and current member Elaine Blodgett says that LWV’s purpose is still to “encourage voters to go out and find out the information for themselves and vote.”

Marilyn McLeod, current LWV president, concurs, adding, “[LWV’s] main purpose is making sure everyone who can vote is registered to vote.”

This year, after decades dedicated to this goal, the LWV is celebrating the centennial year of the 19th amendment along with the long-running success of their organization.

LWV’s Past
LWV began with a group of tenacious women like Luella St. Clair Moss, who was deemed “a steam engine in petticoats.” In addition to being a Columbia College administrator and the first woman elected to the Columbia Board of Education, Luella was president of Columbia’s LWV from 1925 to 1927.

Presidents like Luella eventually led the LWV into the World War II era. During this time, the Columbia LWV was instrumental in changing the city’s governance structure to a council-manager model. They also helped to implement modern garbage collection in Columbia.

Working into the 1960s, the LWV influenced issues such as civil rights, state aid to schools, public accommodations, and fair housing. Today, the LWV still works on many of these issues.

Though the group allowed men into its membership starting in the 1970s, their current membership is still dominated by women who are pertinaciously active in their community’s issues. These women may be both mothers and academics, but whatever their backgrounds are, each holds the goal of making sure that all citizens are informed and able to participate in elections.

“We register voters [and] provide public forums. People can make up their own minds. We don’t tell them who to vote for,” Marilyn explains.

After more than 100 years, this core goal still carries on.

Goals and Community
Since its founding, LWV’s goals have tended to focus on community issues.

“Civil liberties is a big issue,” Marilyn says. “Immigration issues, protection of the environment — those are the kinds of things we’ve worked on. We try to encourage our elected officials to support our goals.”

In the past and up to the present, LWV’s goals have also focused on other local issues such as recycling, health care for all, and public school funding. These are goals that hit the Columbia citizenry where it counts on both a local and national scale. However, these goals are not explicitly aimed at right-wing or left-wing views; the organization views itself as non-partisan. As Marilyn puts it, “We’re very middle of the road.”

LWV creates its “middle-of-the-road” goals and policies through study and research. After examination and discussion of these studies, a consensus is reached on what LWV’s policies and goals will be. Though LWV does take specific stands, they believe that their goals and policies are based on unbiased research and conclusions. In the end, their aim is to give people the information and let Columbia voters make up their own minds about community issues.

Celebration
At the 100-year mark of the 19th amendment, LWV is having a year-long celebration comprised of a variety of events. These events include historical displays and programs that focus on commemorating 100 years of women’s suffrage and LWV’s community involvement.

But what makes this celebration so important? Marilyn explains that it is a time for women to think about “the time when [women] didn’t have a vote and now they have it. That is a key issue — not to take it for granted. It doesn’t hurt to look back at history and think about it. If you were looking at a class, and the class was half men and half women — say it was 1880 — all of the women in this class don’t have the right to vote. They may not have the right to own property, the right to keep their children if they get divorced, [or] the right to serve on a jury. You have to think about the importance of that vote and not take it for granted. Take the time to vote.”
Part of LWV’s goal with their centennial celebration is to show the community who they are and what they stand for.

“Our name is getting out and people are understanding what we’re doing,” Elaine says. “These are interesting times we’re living in. Getting people to understand issues will probably be a little more important in these elections.”

Ultimately, the league would like their celebration to get citizens involved in politics and understanding the affairs of their community.

And after over 100 years, LWV is still affecting people in Columbia.

1912
LWV in Columbia starts with the goal to “form a working organization of those interested in equal suffrage.”

1919
Missouri becomes the 11th state to ratify the 19th amendment.

2020
LWV celebrates the centennial anniversary of the 19th amendment.