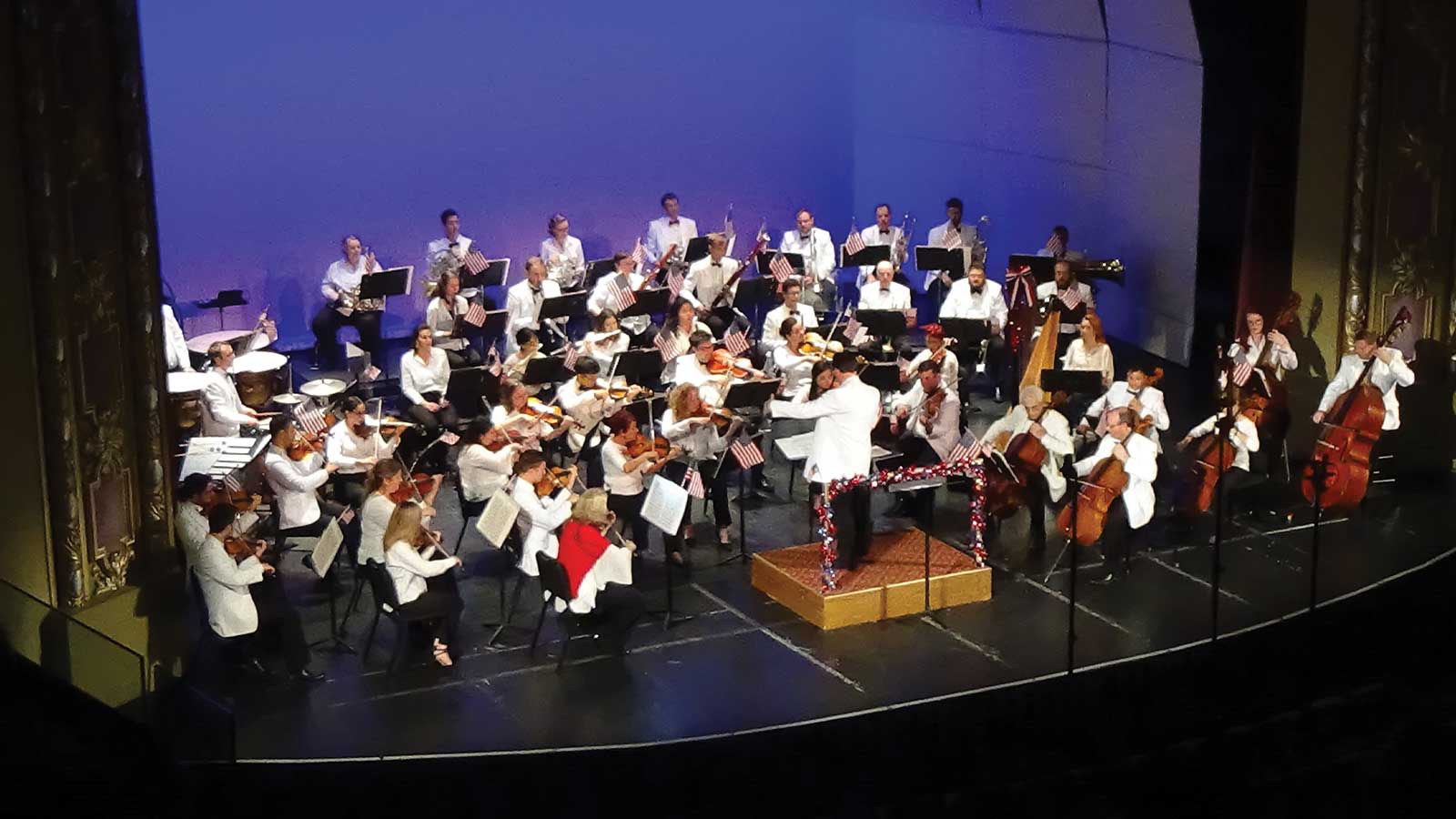 The Missouri Symphony celebrates 50 years of giving back to the community through classical music.

Husband and wife Hugo and Lucy Vianello founded The Missouri Symphony Society — which is now known as The Missouri Symphony, or MOSY for short — in 1970. With this year being the nonprofit’s 50-year anniversary, the staff is reflecting on how they have stayed true to the organization’s mission of educating and inspiring Mid-Missouri residents through classical music.

In 2000, the organization brought in the English maestro Kirk Trevor to be the new and permanent conductor for the symphony. Throughout his time as the music director, Kirk has developed the Symphony of Toys, a charity concert in support of Toys for Tots, and has also reinvented the organization’s summer music festival, Hot Summer Nights.

Something for Everybody
Hot Summer Nights features 15 concerts that offer a wide spectrum of musical styles over a 30-day period. These concerts don’t confine themselves to just the Missouri Theatre, the symphony’s home stage. Ten concerts take place in the theatre while the rest are spread throughout the Mid-Missouri community at senior centers, Stephens Lake Park, Shelter Gardens, and even at the Ozarks Amphitheater.

“If you’re interested in movie music, there will be a concert for you. If you want your children to hear a concert, we have family programs,” Kirk says. “That old cliché that ‘there’s something for everybody’ is really true in this sense.”

Monica Palmer, the director of development, believes that the best art organizations reflect the community. “Hot Summer Nights is our chance to celebrate the eclectic nature of Columbia. We have such a fantastic, diverse community that doesn’t want to be boxed into a specific genre, and Hot Summer Nights gives them everything,” she says.

Hot Summer Nights did have a significant scare in the summer of 2010, when the MOSY board decided it would be financially best for the organization to cancel the festival. “I felt [cancelling] would be the death of the symphony,” Kirk says.

In 2011, Kirk approached the board and asked if he could have Hot Summer Nights if he raised enough money. Within three weeks, Kirk, a group of volunteers, and other members of the community raised over $100,000. “It’s about preserving an art form,” Kirk says of his instinct of wanting to save the festival.

Community Support
The volunteers and supporters in the community are integral to The Missouri Symphony. The organization’s staff consisted of 11 people, but due to the financial scare of 2010, the organization now has an intimate staff of six people along with “The League,” an entire branch of volunteers. Some volunteers might plan their own fundraisers, while others help with financial processes or hand out pamphlets at the concerts. “It’s a group of really fantastic people who come together to support the organization. It’s volunteer work like [this] that helps keep the organization afloat beyond what the staff does,” says office manager Rachael Norden.

The Missouri Symphony staff admires the community and their support. Trent Rash, executive director, explains, “It’s humbling — every time things have almost gone under, it was brought back up by the people.”

Reaching Accessibility
A common misconception many people have about The Missouri Symphony is that it’s only for the elite. “That’s the farthest thing from what we want to be,” Trent explains. “We want that word to become ‘accessible.’ We’re here for everyone.”

The Missouri Symphony is for everyone. And one way they have taken strides towards this new accessibility is by dropping “society” from their name during a rebrand in 2017. “We are an organization for the community,” Rachael says.

Kirk further explains that this elitism that prevents people from enjoying MOSY also stems from the idea that they can listen to the same music at home “without having to listen to errors.”

“[The Symphony has] become relevant because it’s an experience,” Kirk says. “You don’t come to concerts anymore — you come to experiences.”

A Golden Celebration
To celebrate a monumental 50 years, The Missouri Symphony has a variety of plans, some including cake and champagne, Rachael explains. The organization will also be hosting the Golden Gala, a new black-tie event during Hot Summer Nights on June 19 that will further celebrate the golden anniversary. “[The gala] will be elegant and lovely. It will have items for raffle that are very high-dollar,” Trent says.

The gala will also premiere a sneak peek into a documentary Peace Frame Productions has been working on in honor of the 50-year celebration. “We’ll celebrate who we are as an organization, and we’ll celebrate the people and the music — hopefully everyone there will feel invested in this organization,” Monica says.

Moving forward, The Missouri Symphony staff is looking forward to continuing to engage the Columbia community — whether that’s through the volunteers or students. “Our mission is to make music to educate and excite, and we hope that it will change them in some way and they’ll pay it forward,” Trent says.

1970
Hugo and Lucy Vianello found The Missouri Symphony Society as a nonprofit organization.

2000
The organization hires Kirk Trevor as the permanent music director.

2010
Hot Summer Nights gets cancelled due to financial reasons.

2011
Maestro Kirk Trevor and the community raise over $100,000 to revive Hot Summer Nights.

2017
The Missouri Symphony Society rebrands and drops “society” from the name.