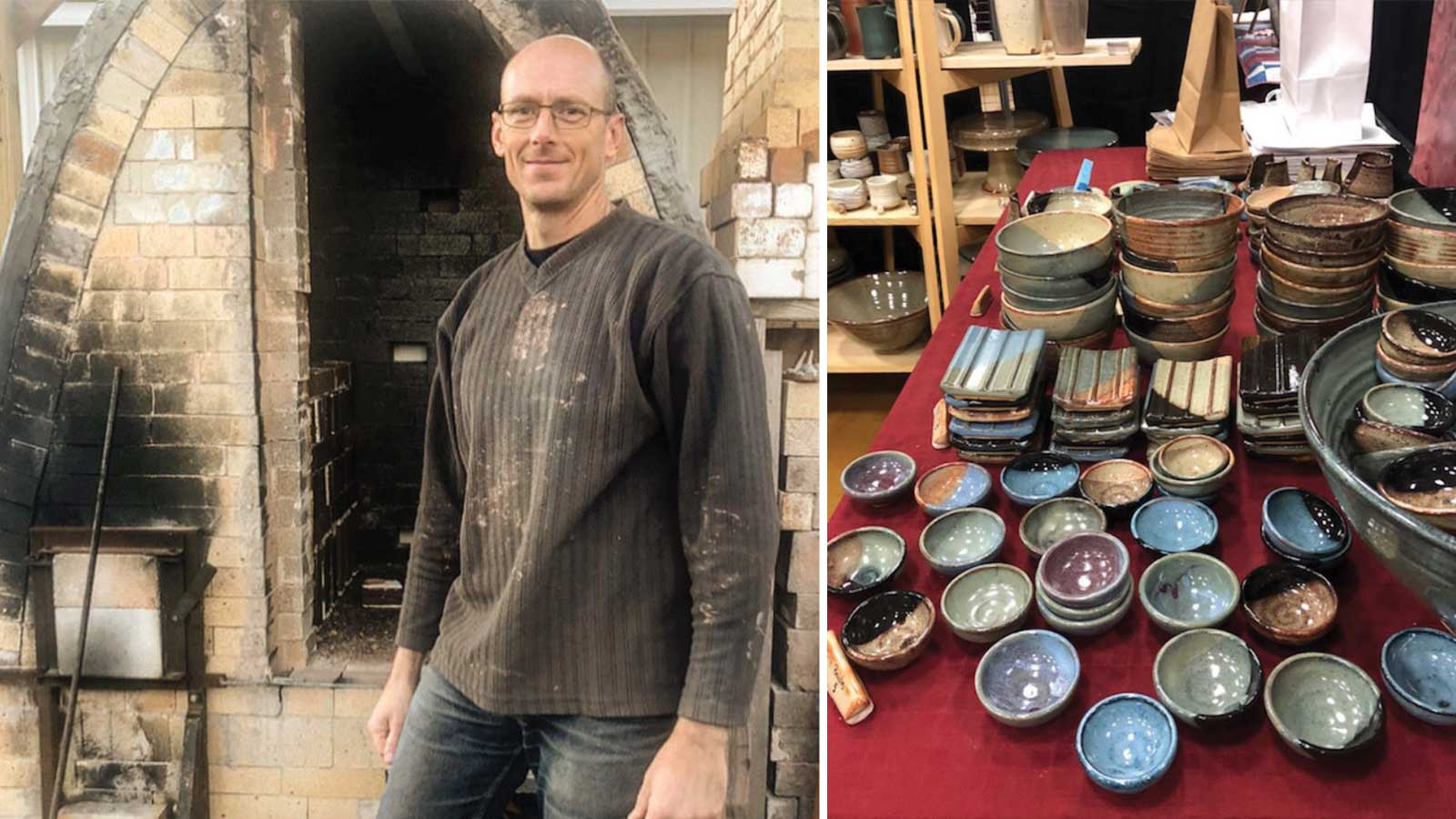 Some potters love creating unique work, while others focus on statement pieces or extravagant sculptures. However, Jeff Ferguson’s artistic focus is on something different. “I like selling useful pottery to people,” he says.

If you’ve been around Columbia for long enough, you’ve probably seen Jeff’s work. Much of it is alive with wood-looking colors such as deep oranges, browns, and reds. Each year, Jeff sells ceramics at Art in the Park, Fall into Art, and shows in Kansas City and St. Louis. A selection of his pottery can be found at Bluestem Missouri Crafts, Helmi’s Gardens, and, occasionally, the MU bookstore.

It wasn’t until Jeff was an undergrad that he happened upon pottery. “I was studying anthropology in California when I met a good flintknapper who I ended up rooming with. He taught ceramics at the university craft center, so I went there to hangout. I made some pottery for a few weeks – eventually moving on to something else,” Jeff remembers.

Years later, while getting a master’s degree in Oregon, he rediscovered his love of ceramics. “I did it for a couple months and it was fun, but again, I moved on to other things.”

Of course, it didn’t take long before Jeff was making ceramics again in his free time while getting his doctorate degree in Colorado. After a while, he let go of it again.

“Pottery is a lot of fun. It’s challenging in different ways than other interests. I kept coming back to it, and I always wanted to get a pottery shop set up at home, but never had the space,” he mentions.

Jeff eventually moved to Columbia to be an archaeology professor at MU – lending the perfect opportunity for a new start with ceramics. “When we moved to this house about seven years ago, I finally had space to make pottery,” Jeff reveals.

Though selling ceramics is a side business – not a profession – Jeff finally found a way back to his love of pottery. And, despite his track record, he hasn’t looked back since.

At this point, Jeff sees his art as less experimental. Simplicity and practicality make his pottery unique. “I’m more fine-tuning my art at this point than making big dramatic changes. To me, that’s the fun challenge of it, the technical side.”

For the time being, Jeff is having fun with his pottery craft. “I don’t want to downplay the decorative side, but I like the technical side of it – in terms of playing with clays and glazes, and figuring out the firing process. I like the challenge behind making consistent, good, fast, and efficient ceramic pieces,” he says.

No doubt, Jeff is an efficient potter. And, as knowledgeable as he is, he unmasks a secret for making great pottery. “Making pottery is all about understanding centering and keeping things stable,” Jeff explains. “You move the clay; you don’t let the clay move you.”