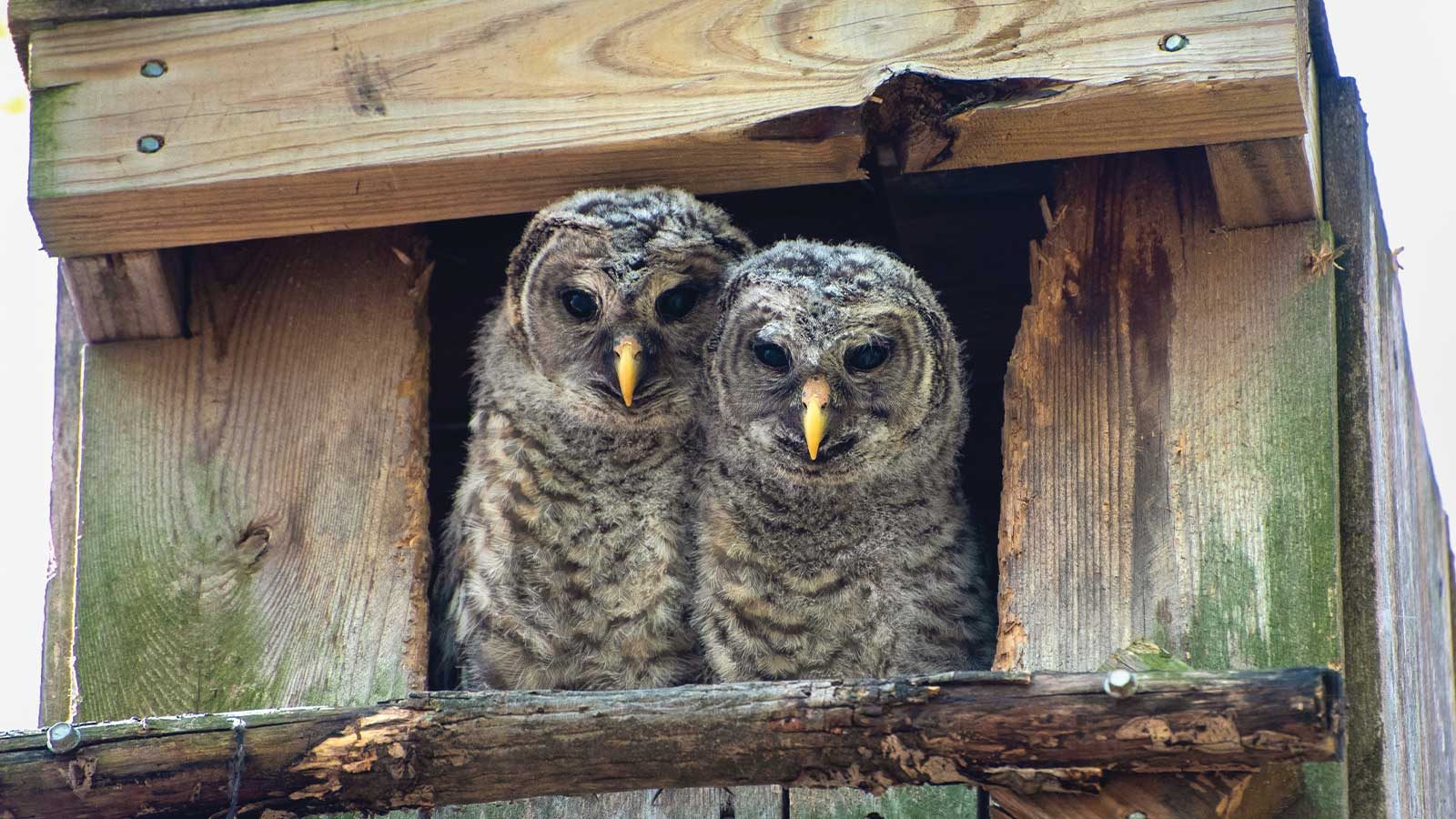 Building Up, Building Out

A nesting pair of barred owls starts their family in the trees above our driveway.

When we moved into our house in the fall of 2007, we noticed that a pair of owls would come at night and make loud vocalizations in the trees above our driveway. The calls would always begin with the familiar “who,” followed by a succession of cries, screams, and rapid-fire hooting. This clamor helped us to identify the birds as barred owls. The creek-side habitat of our neighborhood happens to be ideal for them.

After some research, we found that a nesting pair of these owls will use a tree cavity at nesting time, and might nest in a man-made box if it is the right size and placed in the right spot. So, with the kids’ help, we made a box out of plywood, equipped it with a camera, painted it, and attached it to a tree above our driveway.

Over the next few years, the owls came to the box, but never nested in it. Then, on one very cold winter night, we could hear hooting coming from inside the box as well as outside. After connecting the camera to a laptop, we saw that there was indeed an owl in there, sitting in the corner, facing the opening.

One night, as we heard the pair vocalizing up in the trees, we checked the camera feed and saw there were three eggs in the corner of the box that looked like chicken eggs. The female would spend most of the time sitting on them, but several times a night she would leave the box in response to the male’s vocalizations, and meet him up in the trees to receive food.

We were surprised to learn that the delivered food was mostly songbirds, with only an occasional squirrel or small rabbit. All of the prey was decapitated by the male before being delivered.

About two weeks after we first observed the eggs, one of them hatched, followed closely by the others. The female would feed them by tearing off a chunk of flesh, feathers, and bone, and waving this chunk back and forth in front of the chicks. The chicks reacted by grabbing the chunk and gobbling it down whole. During these early days of life, the mother would groom the chicks by grasping feathers and gently drawing them through her beak.

The male hunted day and night so the chicks ate often and grew rapidly. The feathers, bones, and hair that were a part of their diet were not digested by the birds. These undigested bits were formed into a pellet and spit out. We found many of these pellets in and around the nest box. After about four weeks of being fed, the chicks began feeding themselves.

By now the owlets were very active, stretching and flapping their wings and spending more time perched in the opening of the box. The oldest and largest chick was the first to perch in the opening and the first to leave the box altogether. The other two soon followed. None of them could fly yet, so they climbed up the tree trunk and branches, clutching the bark with their sharp talons. The mother was always close by and continued to feed them up in the trees.

The chicks were in different locations above the house and would call out to the adults using a high-pitched whistle, and the adults would reply with loud hooting. After a few weeks in the trees, the immature owls moved on. For a few months after that, we could still hear the whistling/hooting exchange going on in various areas around the neighborhood.

We have since built another box and put it in a different tree in our yard. This new box soon attracted another nesting pair and the cycle began anew.