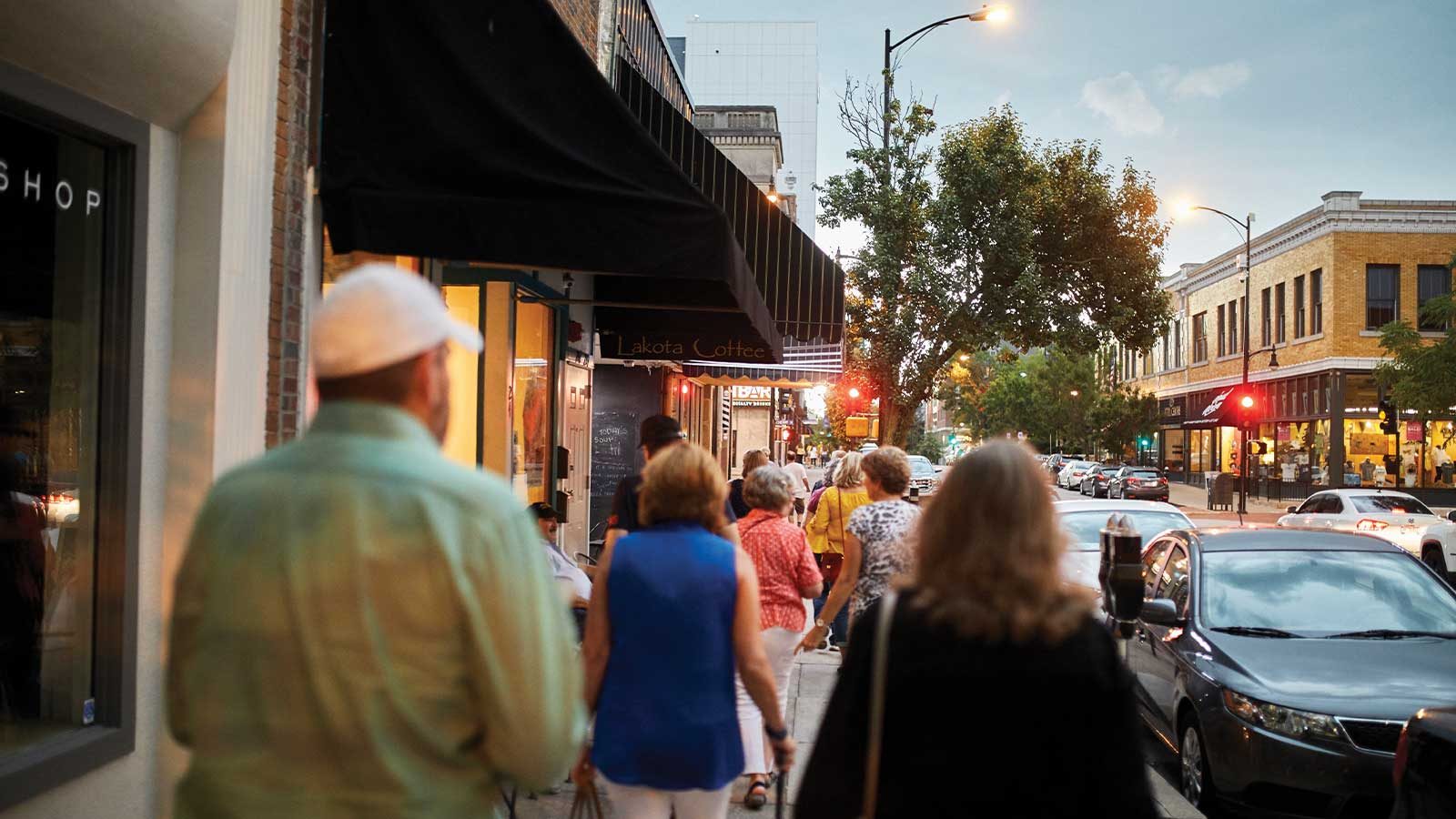 How Columbians make it work by finding a second job.

Moonlighting, freelancing, side hustle — whatever term you use, having a second job, or a side gig, has become more of a common practice in today’s economy. A side gig can provide creative and financial benefits, as these Columbians have learned from taking this approach to making it work on the side.

“Everyone could use some extra money, no matter where you’re at in life,” says Shane Winter. Shane, a financial coach by trade, teaches a course at the Columbia Area Career Center called “Fun Ways to Supplement Your Income.” A diverse demography has enrolled the three times he’s taught the class, with the most recent class split evenly between men and women. The course covers different ways to make extra money, from secret shopping to selling online.

Shane’s firsthand knowledge of side gigs includes his own experience as a secret shopper, which he’s done for more than 10 years, as well as driving for ride-sharing services Uber and Lyft. “It’s not full-time, but it’s a way to be able to make extra money when things are tight or when you want to put money toward certain goals,” he says.

When she’s not working as a pre-K teacher at Discovery Days, Michele Mechlin enjoys the flexibility of being a consultant for Rodan & Fields’ skincare line of products from her home office. Michele considers her Rodan & Fields income as fun money. “It’s that extra income that’s not included in your budget that you can use for whatever you want — a new pair of shoes, a vacation, kids’ activities,” she says.

Finding a Creative Outlet
Side gigs can supplement the budget, but they also offer the opportunity to do something different. “I always think of it as doing something extra to bring in an income or something that you really want to do for fun,” says Joe Knight. During the day, Joe works with kids as a prevention specialist at the Boys & Girls Clubs of Columbia. On an occasional evening, you can find him downtown talking about Columbia’s history and culinary scene as a tour guide for Columbia Culinary Tours.

A Columbia native, Joe spent five years living in Minneapolis, where he developed an appreciation for the food scene. He says that experience was when he “really fell in love with the experience of food and what really good food can be.” As a tour guide, he is now able to share his appreciation of the creativity behind food with guests, both locals and visitors alike.

“Being a tour guide comes naturally,” Joe says. “I also enjoy the history side a lot. You get to see the behind-the-scenes of restaurants and hear about why restaurants get food from different sources. You see things you wouldn’t see if you just go out to eat.”

Michele also sees an outlet in selling Rodan & Fields. “Because I had gone from working full-time to being a full-time mom, it was originally an outlet for me to have a place to put energy and creativity. It’s gratifying to have somewhere to put that energy,” she says. It’s also gratifying for her, with her social work background, to see how it helps customers and makes them happy.

For Phil Shearrer, the term moonlighting is more accurately described as that of matchmaking — matching your skill set to a need in the workplace. Phil is an organizational development specialist at MU Health Care’s Center for Education and Development. One of his side gigs includes his extensive background as a master trainer for the De Bono Thinking Systems, which emphasizes conceptual thinking and is based on the work of founder, author, and physician Edward De Bono.

“I think of it as matchmaking,” Phil says. “You’re finding that skill set and providing that niche to a group that doesn’t have access to it some other way. If you can provide that, that opens up all kinds of doors. That’s where the creativity comes in — what does this group need?”

Phil is one of only 40 or so De Bono master trainers who are qualified to teach De Bono thinking tools outside of the corporation. He first began training part-time while still working for his former employer, and soon he began getting a lot of gigs throughout the country from corporations and government agencies like the CIA and FDA. He takes vacation time from his full-time job at MU Health Care to teach the courses; last year alone, he did 11 different gigs around the country for different companies.

“I don’t have to do this for the income,” Phil says. “I love seeing a group coalesce around those skills and sharing the joy of what I’m seeing. I love to learn, and so being able to have a variety of experiences and tools in my life gives me mental agility.”

If that wasn’t enough of a side gig, Phil also serves as the creativity engineer for a local corporate consulting firm, Aperio Consulting, working on leadership and coaching. And he spends his free time designing board games, which he considers a hobby. He describes his latest creation, “Corpus,” as one that serious gamers could play with kids and grandparents and still have fun. He hopes to introduce it on Kickstarter late next year.

Technology & the Side Gig
Technology and the advent of the Internet has changed the side gig game — certainly, 10 years ago, no one would have thought that ride-sharing or food delivery apps could be potential sources of income. Technology makes it easier to make money, Shane adds, by not requiring a brick-and-mortar store.

Michele also sees the convenience of technology and the flexibility of selling Rodan & Fields through social media. There are no brick-and-mortar Rodan & Fields’ stores, and sales happen from advertising on social media. “It’s been a good fit for our family because it’s so part-time,” she says. “You can work the hours you want, when you want, and you can do it from home.”

Technology has made it easier to make money without a set schedule, Shane agrees. “The majority of side hustles allow you to make money on your downtime,” he says. “You can sell T-shirts from your Etsy store at 2 a.m.”

Phil is starting to see more online learning in his side gig business as a master trainer. “The biggest benefit is no travel,” he says. “I can take off a Friday afternoon and teach a course without having to travel.”

Unexpected Bonuses
Another advantage of Phil’s side gig is that it directly relates to his day job. When he returns from a training session, there is often an informal opportunity to share with his own team — something he considers a win-win. “It really is professional development,” he says. “I always bring back another story, another tool, another perspective about what will help things work better here.”

Joe’s gig as a tour guide has given him a better awareness of Columbia, particularly through training as a certified tourism ambassador. “It’s introduced me to a lot of new people that otherwise I wouldn’t spend time with,” Joe says. “I really like that aspect of being out in the city, and it gives me more awareness of what’s going on.” This includes being on the lookout for new restaurants and favorite foods — and he’s happy to share tips.

One of the highlights is that “you never know what’s going to happen on a tour,” Joe says. Tour guides have to be prepared for the unexpected and be flexible, whether it’s with people, weather, or restaurants. The challenge for Joe, a father of two young children, is that evening tours take him away from his family. “I wouldn’t be able to do it without the support of my wife,” he says.

For Michele, an unexpected bonus of Rodan & Fields is that it has allowed her to make new friends while reconnecting with old ones. The business gave her a reason to travel back to Albany, New York, where she lived previously, to do an event and reconnect with friends and former co-workers.

“I don’t see myself ever giving up Rodan & Fields,” she says. “It’s a no-brainer because it doesn’t take a lot of time. You can make it what you want — you can put in a lot of energy and make it a career, or do it on the side like I do. Why wouldn’t I keep that in my life?”

Any tips for those considering a side gig? Shane advises that you balance your side gig with your full-time job. “Don’t put so much energy into your side gig that it takes away from what you really do in life,” he says.

“Pick the thing you do the best and that you love, and then farm out everything else,” Phil says. He cautions, though, to consider a side gig as discretionary income. “Don’t quit your day job.”

Editor’s Note: Katie Perry Harris is an account manager at Knorr Marketing Communications whose side gig is writing for us here at COMO magazine.