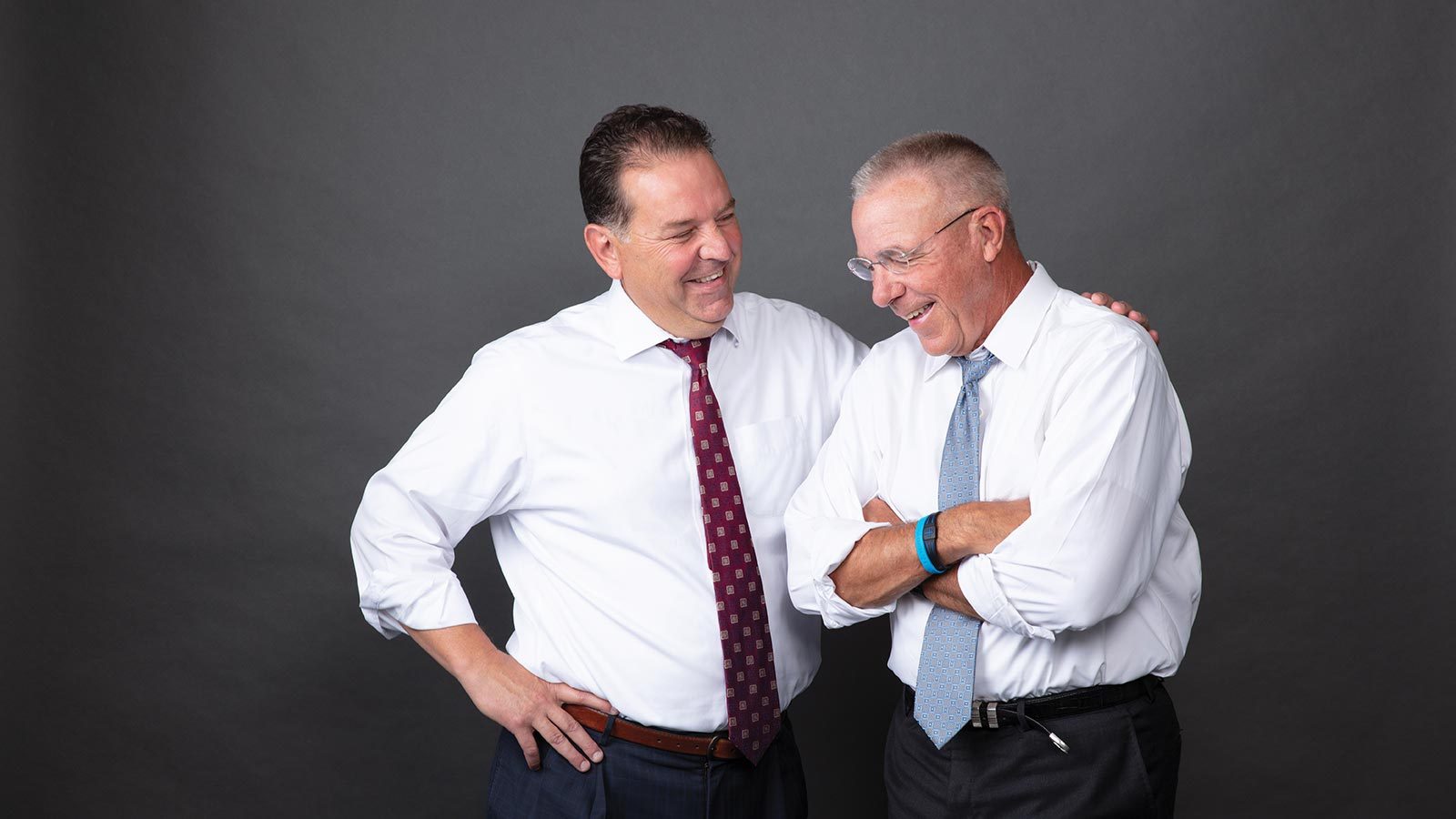 Joe Miller and Matt Moore find friendship and fun while giving back.

Matt Moore, president and chief operating officer of Shelter Insurance, and Joe Miller, central Missouri president of First State Community Bank, didn’t meet until they volunteered together on the board of Boys & Girls Clubs of Columbia. Now these two have forged a friendship so strong that it even has them rappelling down the side of a building together — all in the name of helping others.

Their friendship is built on their commitment to making our community a better place to live and work for all.

From Board Meetings to Fishing Trips
Matt was a Boys Club kid himself growing up in Little Rock, Arkansas. He considers it an important part of his heritage. “Back in that day, it was just a boys club and then they had a separate girls club,” he says. “I played baseball through the boys club and ended up playing baseball in college.”

Following graduation from the University of Arkansas at Little Rock, he continued his connection with the club, working at a chapter in Little Rock as the athletic director. Matt’s career with Shelter Insurance brought him to Columbia, and when the Boys & Girls Clubs of Columbia sent him a donation request, he responded with a note that he used to be a club kid.

That note spurred a call from Boys & Girls Clubs of Columbia Executive Director Valorie Livingston. “Anyone who has gone to a Boys & Girls Club is already passionate about the impact it had on their life,” Valorie says. “Not only did Matt attend there, but he also worked there and mentored kids.” Their conversation led to an invitation to join the club’s board.

It was then that he met Joe Miller. Their service together quickly evolved into a friendship based on their dedication to community, family, and faith. Of the two, Joe is more outgoing and Matt is more reserved. “He is humble, unbelievably kind, and giving,” Joe says of Matt. “I have a few people that are on my Mount Rushmore of people that I look up to, and Matt’s on my Mount Rushmore.”

Matt describes Joe as someone with a “huge heart for kids and the community in general.” Matt admires his friend’s passion for the organizations he is involved with, including Joe’s longtime service as a member of the Southern Boone School Board.

The two are dedicated to their families and enjoy getaways to Matt’s farm in northern Missouri or fishing trips with friend Ed Scott. Humor is also an important part of their friendship. “This year Joe got out-fished,” Matt says. “He wasn’t too happy about it — something I need to remind him of every now and then.” Joe retorts that Matt is “finally learning how to catch some crappie now that I’ve taught him.”

In addition to his career with Shelter, a company known for its corporate responsibility, Matt spent 16 years as an SEC football official. “I would turn on the game on TV and there he was,” Joe says of watching his friend officiate. “He has great stories about his time as an SEC official, the electricity in the stadium and how, regardless of what people think, the officials try to do the very best job they can.”

Matt considers his tenure as an SEC official a special time in life, albeit one that caused stress and time away from family. “It is a great avocation that few people understand,” he says. “I worked in great stadiums with some of the best coaches and players in the nation.”

Trust and integrity — characteristics that also describe Matt himself — were crucial to officiating. “As officials, you develop a bond with your fellow officials that involves a tremendous amount of trust. You have to trust that they will be prepared, do their job, and that they always have the interest of the crew in mind at all times,” he says. “I miss those relationships the most, along with working the games.”

Teaming up to Help Kids
During Matt and Joe’s tenure on the board, the club began two capital campaigns, including one for a 14,000-square-foot expansion that more than doubled its size. Joe praises his friend’s vision and leadership for the expansion, but Matt is quick to point out that it was a community-wide effort on behalf of the kids. “We raised $2.5 million in less than a year,” Matt says. “The community and city got behind it to serve a small portion of the kids who need to be served in our community.”

The board worked with contractor Coil Construction to ensure there was a diverse group of subcontractors for the project. With a club made up of a demographically diverse group of kids, the board wanted to ensure they used as many minority- and women-owned contractors as possible. “That’s how much Matt cares,” Joe says. “He really wanted those kids to look out the windows and say, ‘Hey, I could be building this Boys & Girls Club. I could own my own business and do this.’”

The club’s new addition includes a culinary kitchen, a recording studio, a gym, and a theater. Matt counts his involvement in the campaign as one of his favorite community projects. “To see the club come to fruition, to see it built, and to see the joy in kids’ eyes when they’re in the recording studio or gym or kitchen or just playing — that’s pretty special,” he says.

When talking about the new building, Valorie cites the community’s need for affordable summer and after-school programs and how the new facility enables them to serve more kids and offer expanded programs. “Both Joe and Matt were instrumental and passionate as board members in understanding that we were not in a large enough facility to run enough programs to serve our kids,” says Valorie. “They love kids and really took on a leadership role.”

The two currently serve as co-presidents of the Boys & Girls Clubs of Columbia board. It seemed natural for the duo, who had each previously served individual terms as president, to team up together. “We feed off each other,” says Joe. “Matt and I work extremely well together, but we couldn’t do it without Valorie and the staff and the strong and engaged board.”

As a result of the Boys & Girls Clubs project with contractors, Matt created a job fair at Shelter that brings in employers to talk about job creation with minority- and women-owned businesses. “It’s kind of a big deal,” Joe says of his friend’s efforts.
Matt considers it a community effort to help businesses in Columbia. He credits Jim Whitt, director of Columbia’s supplier diversity program, for starting the conversation. “We try to help those smaller companies understand the pitfalls that small businesses face, from regulation to advertising,” Matt says. He plans to continue these efforts as incoming president of the Columbia Chamber of Commerce. “I’d like to continue to infuse and help our businesses.”

Over the Edge Together
It’s First State Community Bank’s history with faith-based nonprofit Love INC that brought Matt and Joe together to rappel down the side of the Tiger Hotel. A bank employee who also served as a volunteer coach for Love INC’s money management program brought to Joe’s attention a client who couldn’t get ahead financially due to high-interest payday loans. Five community banks then came together to work with Love INC to start a fund. The fund allows those who complete the money management program to apply for zero-interest loans.

“We help take care of people in the community to get out of this vicious cycle,” Joe says. “These are people who have jobs and are employed but can’t get out of that cycle, so we’re helping them do that.”

Joe also realizes the importance of businesses supporting the community. “My commitment to the community really began when I worked with Bo Fraser at then Boone County Bank in the 1980s,” he says. “Bo always talked about the three-legged stool of work, family, and community involvement. Our success as a bank is directly tied to the success of the community.”

That’s why he was happy to support Over the Edge last year. The “Edgers,” as they are described, rappel down the Tiger Hotel in exchange for donations to Love INC. Despite his own fear of heights, Joe challenged Matt to go over the edge, and he agreed to do so. “There are not too many presidents of companies who are willing to do this and take that risk,” Joe says.

The two friends trusted each other enough to rappel down the building together — even holding hands on the way down — with their families there to support and cheer them on. It was a bucket list item, a thrill, and a donation for an important cause. “It was a blast,” Matt says.

At the end of the day, it’s their passion for helping the community that drives them to rappel down a building, start a job fair, or create a fund to help those in need. “Find your passion and something that you truly believe in, and then it’s not work. It’s a love that you have for giving back,” Joe says.

Rappelling down the side of a building may seem risky to do once, but Matt and Joe will be back at it again this year. They will be dangling down the side of one of Columbia’s tallest buildings, coming together to help those in need however they can — and having a blast while doing so.