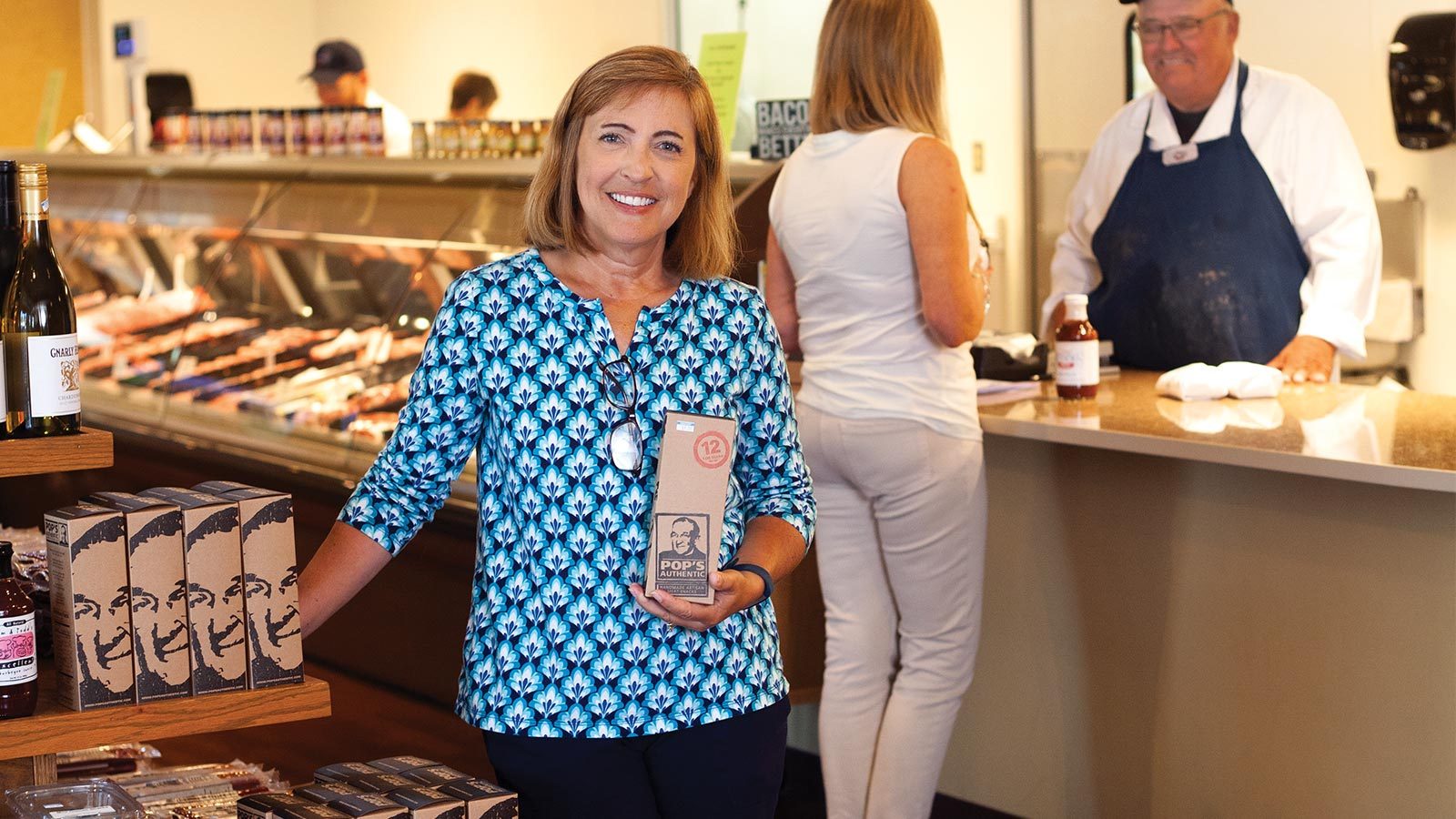 Celebrating 65 years of running a family-owned business is no small feat. Jennings Premium Meats, located in New Franklin, outside of Boonville, began as a butcher shop for local farmers. Through the years, the company has expanded in both size and significance. Customers now travel from all across the state to buy meat from Jennings, while others from around the country order their famous Pop’s Snack Sticks online.

In the summer of 1954, brothers-in-law Oscar Jennings and Orville Struchtemeyer bought a storefront in New Franklin where they would butcher for farmers in the area. Oscar’s son, Keith Jennings, got involved with the business and started the retail portion in 1968. Now, anyone could come to the store to purchase a cut of something.

Twenty years later, Keith’s son, Jason Jennings, got involved and expanded the business with the addition of smoked meats that have received numerous state and national awards.

Today, Jason and his wife, Stephanie, are co-owners of the business, which is like a family heirloom, passed down through each generation. “For a small, family-run business, 65 years is pretty good, pretty successful,” Stephanie says. “So, we feel like we’re doing something right if we’ve been here this long.”

The family history of Jennings Premium Meats is a big deal to the owners, and they’ve worked hard to maintain that history, even when it seemed it was lost.

Rebuilding Together
“In December of 1992, we had a fire and it completely destroyed the business. There was nothing left,” Stephanie explains. “We had help when the fire happened. We had farmers that came to town with their water trucks, and there were seven different fire trucks that responded, so there were a lot of people that helped us.”

The fire burned down the entire structure, and while no one was seriously hurt, they had to figure out their next steps.

Stephanie explains that they decided to stay in the same location instead of moving, which meant they had to start rebuilding. “We also had an insurance program that covered our employees, and as long as we could keep our employees working, the insurance would come in and help us cover the wages,” she says. “So when we rebuilt, a lot of the interior work was done by us and our employees.”

They did cabinets and plumbing, hung drywall, painted, and installed cabinets. Stephanie says many of the employees have been with the company for a long time, and those who helped rebuild after the fire joke that, along with being meat cutters, they also learned to be plumbers and painters.

Stephanie adds that they got a lot of help and support from the community as well. “That’s part of being in such a good community,” she says. “When something does happen, you see that the people are there for you.”

Due to the hard work and resilience of the employees at Jennings Premium Meats and the aid from the community, they were able to rebuild in the same location and reopened in 1993, the summer after the fire.

From One Era to the Next
Kevin Beaman is the company’s retail manager and has been a part of Jennings for 35 years. Kevin was hired when he was a teenager trying to make some money with an after-school job; now he’s worked with all three generations of the family.

“When I started, our customer base was fairly small, mainly just a slaughter operation, and now we’re a full-service retailer. We ship products all over the United States,” Kevin says. “Just to be able to see it grow from such a young, small company to where it is today is pretty amazing.”

He explains that each owner had their own knack that they would contribute to the company. “Oscar was more of the butchering, Keith was more the processing, really growing that part of it with new products and things, and Jason has just hit it out of the park with smoked meats and snack sticks and things like that.”

Stephanie and Jason have a 15-year-old son, Tyler, who is fairly involved with the business too. “We don’t know what he’ll do, but it’s the possibility of maybe even a fourth generation, which is obviously exciting,” Stephanie says. Tyler does mostly grunt work for now, but Stephanie says it’s a way to get him involved and teach him about every aspect of running a company. “There are a lot of things making the business go every day, and you’ve got to take care of it.”

Stephanie says they’re planning to do a week-long anniversary celebration this fall. “We were going to do it this summer, but with the flooding, most of our customers couldn’t get to us.” They hope to do some giveaways, have samples, and run discounts to celebrate with their community and customers that have been coming to them for so long.

“It makes you very appreciative,” Stephanie says. “For 65 years, customers have been coming to us and continue to come to us.”

1968
Keith, Oscar’s son, joins and expands the butcher shop into the retail market.

1992
A fire destroys the original building in December.

1993
The business reopens in the summer after months of rebuilding.

2007
Famous Pop’s Snack Sticks are introduced and become a hit.