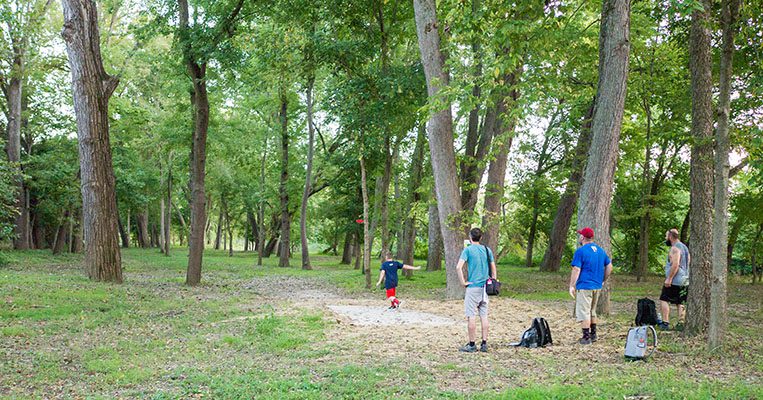 Rolling hills, a small creek, and lots of trees make up the terrain of Strawn Park, but Harmony Bends disc golf course is what the park is known for. The award-winning, world-renowned course has been frequented by Columbians and avid disc golf players alike since it first opened in 2016.

“The disc golf course is definitely the main feature out at that park,” says Megan McConachie, strategic communications manager at the Convention and Visitors Bureau.

Now, the city of Columbia is preparing for the course to host the 2020 PDGA Tim Selinske United States Masters Championship in May. Three Columbia organizations partnered together to submit a bid for the course to be chosen, and their hard work paid off. Beating out eight other communities for the opportunity, Columbia hopes to attract a large audience for the prestigious tournament.

The beautiful, challenging course has some prestige of its own, however. Harmony Bends has been named both Disc Golf Course of the Year and Top-Rated Course in the World by DGCourseReview. The 18-hole course was designed by distinguished disc golf championship course designer John Houck.

“Having him come in and being able to lay that out made for a really fantastic course as soon as it opened,” Megan says. “It’s a really phenomenal facility.”

The Columbia Convention and Visitors Bureau, parks and recreation, and the Columbia Disc Golf Club joined forces to put together a bid for the course selection process. Megan says partnering with the Disc Golf Club gave them a bit of an edge over the other bids, as the club helps organize different tournaments at the course.

“It helps kind of provide a great foundation for an event like this, knowing that there’s a local group that can help us plan and can also provide event support,” Megan says. “That was definitely something that helped us to stand out.”

In a news release from the Convention and Visitors Bureau, Mike Downes, PDGA director of operations said the combination of the team hosting the event, the community support, and “the opportunity to hold the event on one of the most prestigious disc golf courses in the United States” was viewed as “a recipe for success.”

Megan also highlighted the benefits that this championship will bring to Columbia. “It will be a fairly large event. It will be players from across the country who are coming into Columbia who get to experience this really high-level course, and so it really helps establish the reputation of Columbia as a great place to come have an event like this.”

She also shared that the event will have an economic impact on the city as well. People coming into town to compete in or observe the elite tournament will be staying in Columbia hotels, eating at Columbia restaurants, and shopping in Columbia stores.

The championship will benefit local businesses and workers and will potentially cement Columbia as a great place for these kinds of events to be hosted. “That’s kind of the benefit that extends beyond just that event, and it carries on even after the event is over,” Megan says.