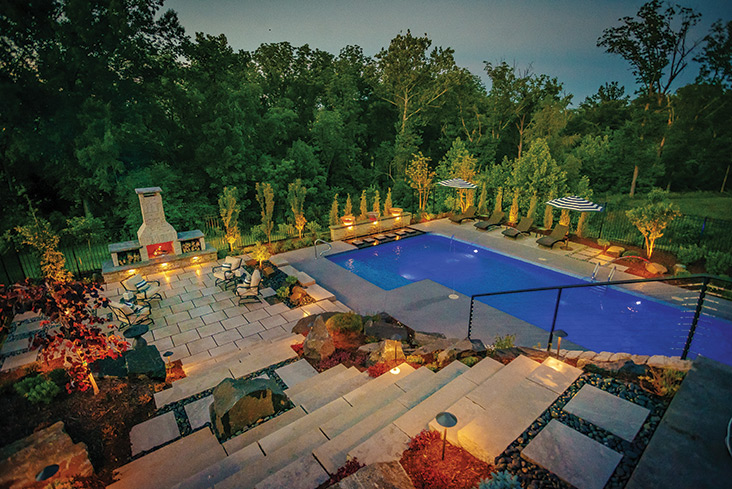 Todd and Beth Whitaker partner with Rost Landscaping to create an outdoor oasis.

Moving to Columbia was something of a homecoming for Missouri natives Todd and Beth Whitaker. After 22 years as professors at Indiana State University in Terre Haute, the Whitakers wanted to be closer to family and found that Columbia offered the most central location between their three grown children, a growing grandbaby, and Beth’s mother. Plus, the couple met while in graduate school at MU, where both now teach in the Educational Leadership and Policy Analysis Department.

To make sure they had plenty of room for guests, they purchased the palatial 6,350-square-foot estate at 4209 Stone Grove Ct. in the fall of 2016. Built in 2012, the home boasts six bedrooms, four bathooms and marries contemporary open-concept design with lots of traditional details that make it feel homey.

The Challenge
What wasn’t homey was the backyard. While the house sits on a two-acre lot, the backyard consisted of a relatively small and shallow stretch of grass on two terraces in order to accommodate a sharp downward slope not far from the back of the home.

Little had been done to define the space; a small patio that extended to the slope had been constructed off the living room on the main floor, and a concrete slab had been poured to accommodate a hot tub off of the home’s lower level, where the yard was flat.

A towering retaining wall with a railing separated the two spaces. A small plateau of land lay just beyond these two areas before dipping precipitously again into a tree line and a creek that runs along the edge of the property.

Referring to their house as their hobby, the Whitakers enjoy taking on home projects. But reconciling the disparate areas and challenging grades of the backyard proved to be a headscratcher that called for a professional landscaper.

“We needed to connect the two areas and have it make sense,” Beth says. “Jake really made these two areas feel like one.”

Needed Expertise
In the fall of 2017, the Whitakers hired Jake Frink of Rost Landscaping Inc. to transform their perplexing backyard into a dreamy but functional oasis for the whole family to enjoy. With open minds, Todd and Beth gave Jake and his team few guidelines for developing the initial concepts.

“The planning process took about two months,” Jake recalls, noting this timeframe is longer than usual due to the challenges of the slope and of adding many features to a small space.

“The only guidance they gave us was that they wanted a pool and they wanted the space to be cool. They wanted more of a modern and contemporary feel, which we don’t see a lot of in Columbia. We came up with some rough ideas and refined them to meet their budget.”

After some fine tuning to the design concept, construction began and was completed in the spring of 2018. The rectangular pool was placed stretching away from the house on the lower terrace to optimize the existing flat ground. They opted for a saltwater pool, which requires less maintenance. The pool is also heated, which Todd enjoys year-round for fitness swimming.

“We swore we would never have a pool,” Beth says. “Everyone we talked to said it was too much work — the upkeep, the maintenance. But with a saltwater pool, it’s easy.”

At its far end, water cascades into the pool from an elegant stone-bowl water feature, and large black stepping stones offer an adventurous trek across the water. For extra wow factor, water spraying around the perimeter turns the pool into a full-scale fountain. Ample space was left around the pool for lounge furniture, fencing, and landscaping, and the hot tub was left in place near the house with a stair-stepped platform added to make the tub look built-in. These features delivered the contemporary look the Whitakers were looking for.

“We wanted [the space] to be cool,” Todd says. “We may have been among the first people to get the bowls that spill into the swimming pool.”

Instead of demolishing the existing patio off of the main floor, Jake simply married it into the design concept, adding a modern gas firepit, a built-in grill, and a wine refrigerator along with some patio furniture that Beth chose to round out the area. Jake terraced the slope at the end of the patio with large natural stone blocks that double as stairs and containers for landscaping, and black granite boulders are smattered in to add texture and interest.

At the bottom of the slope beside the pool, a stately stone fireplace with storage for firewood serves as the focal point for the courtyard that replaced the flat patch of yard. The courtyard is paved with two-foot porcelain tile in a pattern that gradually spreads out at the perimeter, with black cobblestones and shrubs filling the gaps to soften the transition to the pool area.

Final Details
“We spent a fair amount of time researching little details, like the detached cobbles, which make a big impact,” Jake says. “They really gave us the flexibility and freedom to be creative, and they trusted us to know what we were doing.”

To maximize its potential for entertaining, the Whitakers had a sound system installed throughout the backyard and discreetly placed lights to add ambiance and make the space enjoyable in the evening.

A lush assortment of ornate trees — tanyosho pine, magnolia, Japanese maple, weeping redbud, columnar juniper and crabapple, and dwarf gingko — knit together all of the elements of the backyard. Because large windows bedeck the back of the house, the Whitakers can admire their outdoor sanctuary from inside as well.

“We don’t have to be outside to enjoy it,” Todd says. “I didn’t anticipate how beautiful it would be at night because of the lighting.”

Jake and his team at Rost Landscaping truly exceeded the Whitakers’ expectations for creating a unique, modern, and functional outdoor space that has become the summertime centerpiece of family gatherings.

“I didn’t dream of the quality family time we would have out here, talking and laughing and playing games,” Beth says. “Everybody loves it.”

Local Businesses Used for the Project: