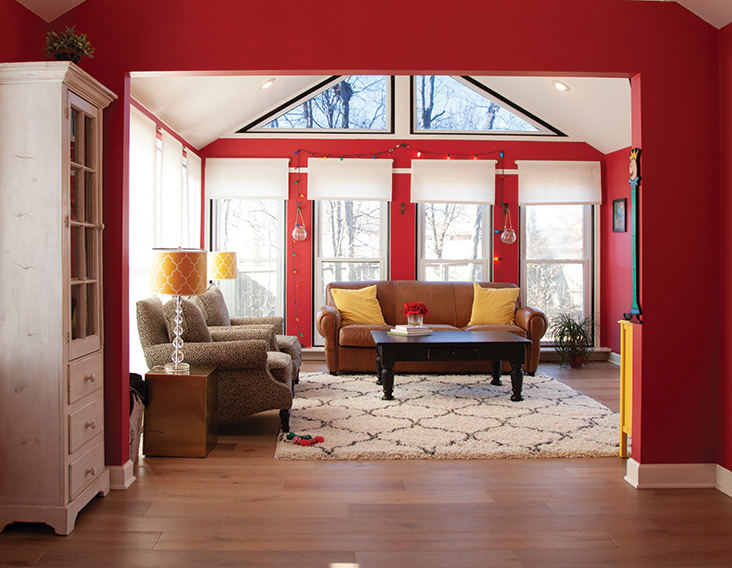 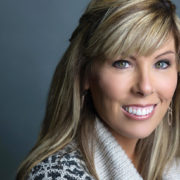 Transformations: From Depression to Hope

Jimmy and Jill Orr make Jimmy’s childhood home their own.

Twenty-four years ago, a cute guy with a contagious smile and thick mop of brown hair asked me out on a date. He took me to dinner and afterward he asked if we could make a quick stop at his parents’ house to check on a litter of puppies his mom’s cocker spaniel just had.

It was there in the driveway that we had our first kiss. (There were puppies! I didn’t stand a chance.) That was the last first date I would ever have. And while I might have guessed that night was the beginning of my happily-ever-after, I would not have guessed it would serve as a kind of blueprint for my future. But it was. Just a few short years later, Jimmy and I became the proud owners of that very same house and started tending to a litter of our own (babies, not puppies).

How It All Began
In 1978, Jimmy’s parents, Scott and Cheryl Orr, hired Don Schmidt to build their dream house, a red brick Georgian Colonial at the end of a quiet cul-de-sac in west Columbia. The house was well-built and outfitted with all the bells and whistles of age — wood paneling, shag carpeting, a blue marble bathtub on a raised carpeted platform. The house even had a finished basement with a sauna. They moved in when their boys, Eddie and Jimmy, who were in elementary school and spent many happy years making memories within these walls.

But in 2001, Cheryl’s cocker spaniels had continued to proliferate and, with seven of them now occupying the house, the Orrs wanted a place with more land and fewer neighbors. When it came time to sell their house, Scott made this offer to his sons: if either of you are interested in buying this house, we’ll make you a sweetheart of a deal.

Eddie and his wife, Dawn, had already settled into another home in the neighborhood, so they passed. Jimmy and I were expecting our first child and decided there’d be no better house to bring him home to.

Ch-Ch-Ch-Changes
Scott and Cheryl were clear with us when we bought the house that it had some deferred maintenance. It was 23 years old and starting to show its age, inside and out. In the 18 years that we’ve owned the house, we’ve done everything from replacing the roof to upgrading the HVAC to knocking down walls. (Your basic joys of homeownership.)

And then there were the aesthetic considerations. While the house was very stylish for its time, blue shag carpeting and harvest gold appliances were not really our taste. We set out to make some cosmetic changes — no big deal, except it’s a little tricky when the stuff you’re changing was hand-picked by your mother-in-law. To her immense credit, Cheryl never said a single negative word or showed a bit of offense when we painted the cabinets she installed, ripped down the draperies she picked out, chipped off the custom tile she ordered, tore out the carpet she selected, painted over the wallpaper she decided on, or replaced the many, many sets of louvered bifold doors she installed.

This is where it helps to have an incredibly kind and understanding mother-in-law. In fact, it’s almost a necessity if you’re going to buy her house. 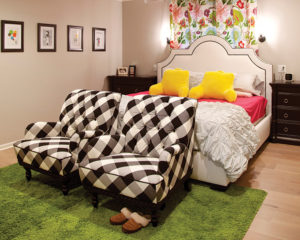 Local Knowledge
One of the perks of moving into the house that your husband has lived in basically his entire life is that it gives you some local knowledge. For example, we know that the basement toilet is prone to flooding, so it’s best to go easy on the TP. We know the vent ducts were installed according to code in 1978, which means our clothes often need to be dried twice. And we know that because of the amount of sediment in our pipes, we will never be able to not have a water softener.

I also know that I will never, ever allow either of my children to live in the basement bedroom. I made this rule based on stories I heard about when my brother-in-law, Eddie, lived down there as a teenager. The sauna I mentioned before? Let’s just say I heard it wasn’t exactly used as intended by Eddie and his friends.

Then there are some smaller, more sentimental bits of local knowledge, like the scrapes on the family room ceiling from when a young Jimmy liked to practice his golf swing indoors. There’s the huge maple tree in the front yard that my mother-in-law planted when it was just a sapling, and there’s the fact that our son Fletcher now occupies the same bedroom his father did when he was his age.

But perhaps the most deep-seated legacy of our home does not have to do with trees or nostalgia or even wild teenage sauna parties. It’s a little something I like to refer to as Orr vs. Squirrel. Right about the same time the Orrs moved into this house, a small family of squirrels moved into the attic. And just like the Orrs, the squirrels have made this their generational home.

I don’t mind telling you this neighborly relationship has had its challenges. They’ve chewed through our electrical wires, torn up our insulation, gnawed holes in our shingles — they’ve been at it for years. They are the Hatfields to our McCoys.

Back in the day, Scott made it his mission to eradicate the little beasts by any means necessary. Neighbors still tell the story of the time he was trying to take out a particularly onerous squirrel with some sort of rifle and ended up shooting out poor Mrs. Summers’ garage window. When the house changed hands, so too passed the vendetta.

I will never forget the time I found Jimmy aiming a BB gun out of our bathroom window, trying to hit one of the little buggers as he was running along our roofline. Fortunately, we’ve since moved on to less violent means of dealing with our unwelcome squatters — though I wouldn’t say we are necessarily winning this fight. I often fall asleep to the pitter-patter of little squirrel claws scrabbling above me in the ceiling.

This Is Us
After 18 years, two kids, two dogs, and countless gallons of paint, this house genuinely feels like our home. I love that we are tethered to our family’s history by it, but I also love that bit by bit, room by room, we’ve been able to make it our own.

We’ve filled our house with bright colors and bold patterns, crowded bookshelves and homemade artwork, year-round twinkle lights and a lifetime of memories. As you can probably tell from the pictures, we truly live in our house; it is not a showplace.

The best decorating advice I ever got was that if you only buy things that you love, you will end up with a cohesive look. I’m not sure anyone would describe our house as “cohesive,” but if nothing else it is certainly a reflection of who we are and what’s important to us.

In the end, a house is just four walls and a roof. A home, of course, is much more. Homes are a feeling, an emotional space, the best of which honor the past but look toward the future. That is what our home is. It may not be perfect, but there are so many things I love about it. I love that our children play in the same backyard my husband grew up playing in. I love that I can look out my window and see trees my mother-in-law planted. I love that Jimmy has never changed the address on his driver’s license. But most of all, I love that our home has been a part of our story from the very beginning. 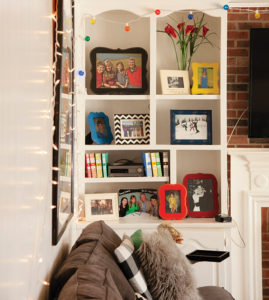