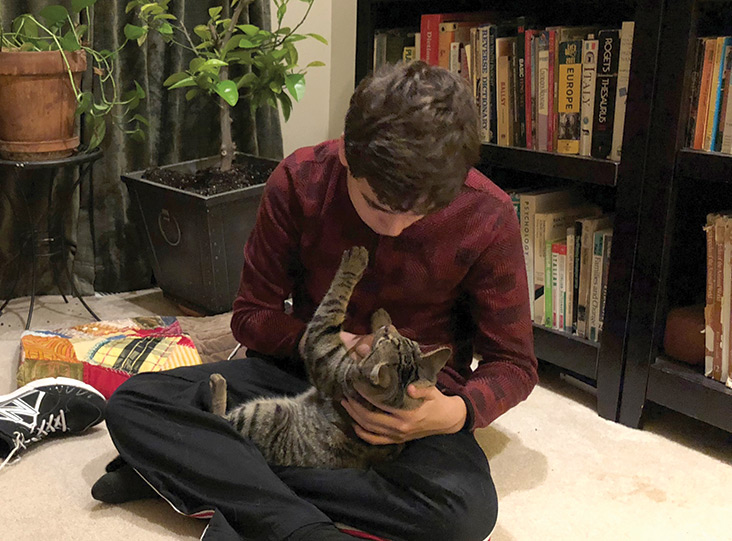 Shelf Life: “The Catcher in the Rye” & Me

Rye Shade bonds with his two tabbies, Winter and Theo.

At first glance, Winter and Theo seem like ordinary house cats. The 1-year-old male tabbies enjoy a leisurely life of sleeping, eating, and playing in Tara and Scott Shade’s large home on the east side of town. But to Rye, one of their four sons, Theo and Winter aren’t just pets; they are steadfast friends.

At 15, Rye is like a lot of high school freshmen. He has an after-school job, loves sports (especially rock climbing), and is involved in school activities, such as being on the set design crew for the Battle High School drama department. Rye also has autism, which means making friends can be a challenge for him.

“I was begging for a cat because I was lonely,” Rye says.

The family previously had a cat, Rebel, who got out of the house and never returned. Rye was devastated. He didn’t want to go to school, instead spending days searching for Rebel. Six months later, in the spring of 2017, Scott and Tara decided it was time to add another feline to the family. They went to a Second Chance adoption event at a pet store thinking they were coming home with one little kitten — but they ended up with two. Though not littermates, a volunteer at the event told Scott that Winter and Theo were bonded and that she was glad to see them getting adopted together. Before long, the two became bonded to Rye, a feeling that’s mutual.

“They’re my babies,” Rye says, as any true cat-lover would. “When I’m having a bad day, I grab them.”

Scott says the cats have taught Rye responsibility and have helped him develop social skills.

“It’s common among those on the spectrum to have sensory issues. Those individuals want affection, but don’t always know how to go about it, and they’re not always comfortable initiating it,” Scott explains. “There’s no repercussion showing affection to an animal, and that can translate into interactions with people as well. Rye’s cats let him know when he’s passed their threshold of his affection, and I believe it’s teaching him social queues for his human interactions as well.”

There has been plenty of research in recent years about the effect of pet ownership on children with autism that supports Scott’s observations. A 2014 study at the MU Research Center on Human-Animal Interaction found that children with autism who live with pets are more assertive and have stronger social skills.

As a program manager at Alternative Community Training, Tara’s deep understanding of autism, coupled with the many therapies Rye has undergone, have built a solid foundation for success in his life.

“So, throw in a couple of cats to help round out his responsibilities and emotional connections? I’d say he’s a pretty lucky kid who takes what life gives him and absolutely makes the most of it,” Scott says.

Rye says he plans to be a cat owner for the rest of his life. In fact, he thinks life could be even better with more cats right now.

“Do you think we should have one more?” Rye asks his dad. 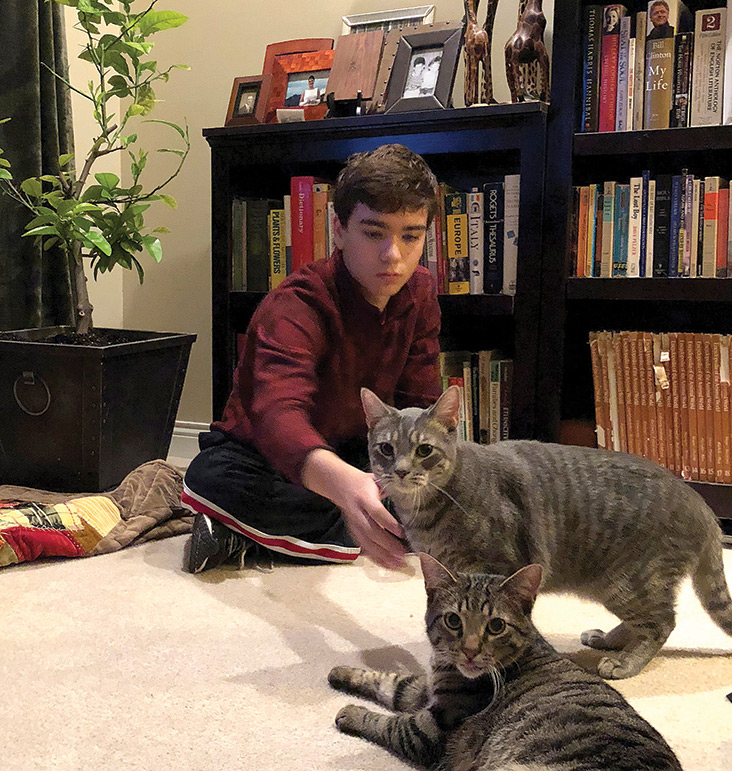