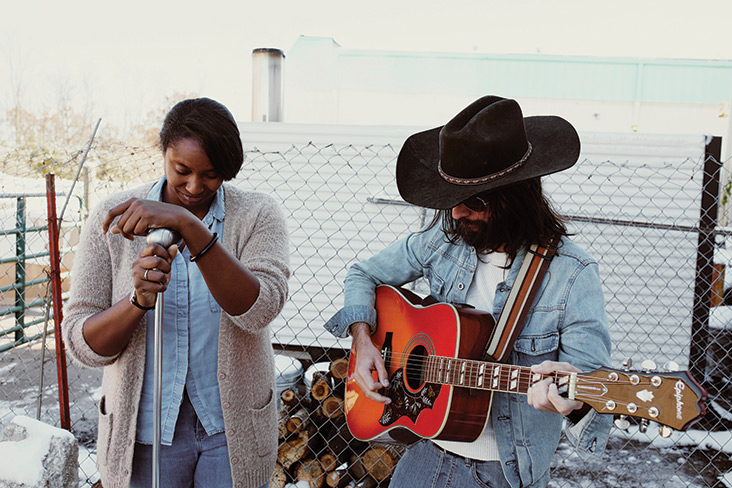 Original music and local performers are the true expression of Columbia. From world-class jazz musicians to blues at the park to catching a band before a film, there’s a group and a musical style for all Columbians to discover and enjoy.

Music tells the story of where we are and ties us together as a community. “People walk through our festival gates from different places with different agendas,” says Jamie Varvaro, director of marketing and development for the Roots N Blues N BBQ festival. “There’s this commonness that happens in that magical park that’s pretty amazing.”

Meet local musicians who are leaving their mark on Columbia’s music scene. Together they represent the spirit and story of Columbia, a community that celebrates who we are and where we’re going through their lyrics and live performances.

The Teacher, the Force, the Jazz Lab

“This is the place where you can fall on your derriere,” Sutu Forté says at a meeting of the Jazz Rep Lab. “We salute and celebrate your effort.”

“It’s not jazz without making mistakes,” calls out a saxophone player in the audience. For more than 22 years, Sutu has been the guiding force and the heart behind the Jazz Rep Lab, a group of jazz musicians who get together to rehearse and improvise the first Thursday of the month at the Universal Unitarian Church. The musicians range in age from elementary school students to retirees and include men and women, all who share a love of coming together to play jazz.

This particular Thursday, a vocalist sings the ballad “What’s New” by Peggy Lee as Sutu accompanies on piano. After the song, Sutu the pianist is back to Sutu the teacher: “We’re not doing it right for you,” she tells the vocalist. There’s a quick compliment to the drummer, a high school student who is here for the first time, and then the band is back to rehearsing part of the song again. It’s her teaching philosophy in action: teach them to not need you and to be their own director.

Sutu first came to Columbia when she was awarded a piano scholarship to Stephens College. After earning her master’s degree from Juilliard, she had her New York debut at Carnegie Recital Hall and performed in New York City for 10 years before returning to her native San Francisco. But she came back to Columbia in 1994, unable to play the piano after a paralysis in her right arm.

“The Jazz Rep Lab is an outcome of my healing,” she says. When a musician named Bobby Rowe visited Columbia, he brought his love of Dixieland and classic jazz standards to Sutu, a classically-trained pianist. She began playing one note as Bobby played along. Soon, the one note turned into two, and then it became the melody of a famous groove piece, “C Jam Blues” by Count Basie.

Always a soloist, Sutu had to learn to leave room for other instruments to be heard. The Jazz Rep Lab continues to evolve. “The Jazz Rep Lab is really now about fun. It has been an evolution of styles, of approach, but it is at a place now where it has taken so deeply the platform of enjoyment,” Sutu says. “It keeps me learning not only as a jazz musician, but as a director and a collaborator.”

The Jazz Rep Lab hosts open rehearsals, and the community is free to come enjoy the music. In addition to their monthly sessions, Columbians can catch a concert at the We Always Swing Jazz Series, which brings world-class jazz musicians to town both through concerts and its “Sundays at Murry’s” series.

“We try to make an effort to have musicians as diverse and representative of the population as possible and also represent different musical styles,” says Josh Chittum, assistant director of the series. “It’s also a wonderful time for women in jazz getting the respect they deserve.”

The jazz series recognizes how special it is to bring nationally-recognized musicians to Columbia. “Columbia knows that it is in the middle of the country and flyover territory, so the fact that we’re able to attract high caliber artists — that is something special,” Josh says. “People realize the value of coming out to support these events.”

“If you have world-class musicians here in Columbia, it raises the bar for our local musicians,” Sutu says. “Now Columbia is one of the high points if you’re a touring jazz musician.” 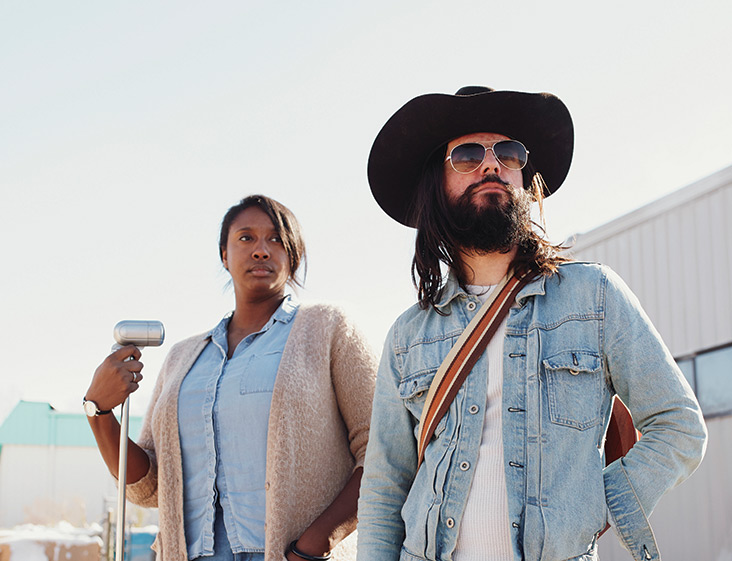 A Girl, a Guy, and a Guitar

For Columbia duo Sterling/Pale, playing at the True/False Film Festival was what dreams are made of.

Sterling/Pale, made up of vocalist Sarah Mitchell and guitarist Ryan Murphy, opened for three film showings at the festival earlier this year. “It’s a full theater just listening to what you’re doing,” says Sarah.

While most know True/False for its documentaries, the fest’s own website says that “some have called T/F a music fest disguised as a film fest.” Music is clearly an important part of the festival, and a music team of five, led by director Martin Kamau, spend a year researching music. “We vote for what will provoke and challenge the audience,” Martin says. “We have listening sessions where we try to find new and diverse music.”

Kamau himself came to the festival through its music, hearing a band he liked playing on stage before a film. He was instantly hooked. Now he works with the music team to pair each film with a musical group, providing a soundtrack to filmgoers’ entrance to the film. The “buskers,” or pre-film artists, start playing to an empty room 30 minutes before each show. Last year more than 50 percent of the lineup featured female artists.

In addition to the pre-film performances, True/False works to incorporate music throughout the fest, from the March March parade to street performances to parties. Offseason shows are also buoyed by local artists. Sterling/Pale has played outside of Landmark Bank and at the Missouri Theater for one of the fest’s parties.

Sterling/Pale began playing together more than two years ago and describe their style as “country-folk, heavy on the folk.” Ryan is inspired by Loretta Lynn and the duets of Johnny Cash and June Carter Cash, while Sarah grew up listening to Patsy Cline and appreciates complex harmonies. “I love when what I’m singing moves me, so often that even just practicing, we’ll run through a song and I’m almost moved to tears,” Sarah says.

Sarah finds the Columbia audience to be supportive. “We have a huge appreciation for local fans. There are so many talented musicians here,” she says.

Outside of their music, Sarah is finishing up her doctorate in human development and family sciences, and Ryan, who holds a doctorate in mathematics, teaches math. “We are both in academia, and that’s rewarding in its own way, but getting to have this sort of creative outlet is something I enjoy so much,” Sarah says. 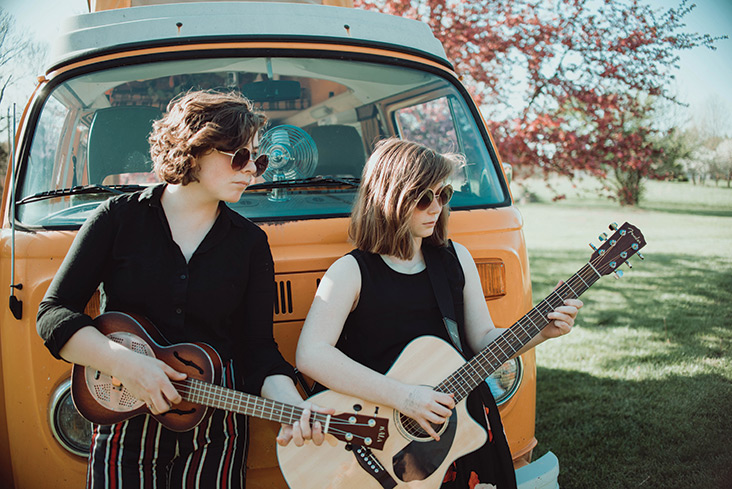 The Up and Comers

The Burney Sisters got their start busking outside of Teller’s restaurant on Ninth and Broadway. One of the people who heard them play was Tracy Lane, executive director of Roots N Blues N BBQ. Fast forward a year and a half and the duo — Olivia, 13, and Emma, 11 — played on stage at the opening night of Roots N Blues earlier this fall.

“It’s what we wanted our festival to look like,” Tracy says. “We opened the festival with two young women from Columbia who are stellar musicians.”

For the Burney Sisters, it was an amazing experience to meet one of their favorite bands, The Avett Brothers, and also to play to a local crowd. “It was like a whole crowd of our Columbia family,” says Olivia. “It was like talking to a friend on stage.”

“One of the things we pride ourselves on as a festival is catching these artists as they’re beginning to ride the wave,” says Jamie. “We put a pair of local musicians, the Burney Sisters, in that category — people are going to say, ‘I remember when.’”

Olivia first started playing ukulele when she picked one up for a dollar at a garage sale, and Emma plays guitar. The sisters started posting videos of their songs on Facebook. Within a year, they had 1,000 followers, and they now stand at 4,000 and counting.

Olivia and Emma are homeschooled, which allows them to focus on their schoolwork during the day and still leave time for music practice. Weekends are for gigs, and they’ve played 150 shows both in and outside of Columbia. They write their own music, with Olivia working on the melody and lyrics and Emma fitting in the harmonies and instruments. Both girls play multiple instruments now.

April Burney, the girls’ mother, asked them about their goals when they first started playing together. One of the girls mentioned her dream was to play at a local Columbia venue. That’s already happened, with the girls playing at the Blue Note, Rose Music Hall, and festivals around Mid-Missouri and beyond, opening for the likes of Wynona Judd and even playing at venues in St. Louis. Dream bigger, April told them.

“Music is what we do,” says Olivia. “I can’t imagine what we’d be doing without music.”

The Roots N Blues team is just coming off this year’s festival, but the planning is already underway to find that new act, the next up and comers, the sweet sounds of Columbia. “It’s time for next year’s booking conversation to begin,” says Tracy. “We’re looking for something that Columbia wants to hear.”

And Columbia has plenty of options to hear new and original music. “How we create living in Columbia is expressed through our own unique music,” says Sutu. “It’s our story. It’s our current event. We are going to express as musicians how we are right now, how we’re growing, where our successes are.” As an audience, we Columbians are lucky indeed to hear and support these local musical voices as they play and sing their stories.