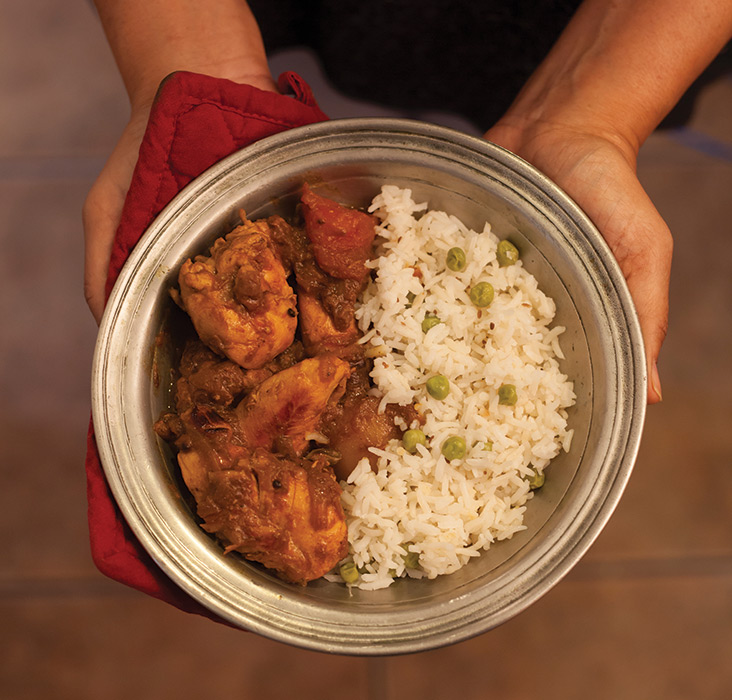 Authors Nina Mukerjee Furstenau and Donna Battle Pierce are award-winning Mid-Missouri food journalists who use food as a lens to view and discuss culture, history, and more. The two were part of the Bon Appetit panel at the 2018 Unbound Book Festival.

A kaleidoscope of yellow sulfur butterflies flutter beyond the windowpane in late summer outside author Nina Mukerjee Furstenau’s home in Fayette, Missouri. They know it is time. Time to begin the journey back to the warmth of Florida as the torrid midwestern air slowly exhales into autumn. They return south for a culinary dance, tasting azaleas through receptors in their feet. It was migration in process, the movement of beings from one place to the next, following the inherent urge to return to the homeland.

Somewhere within us, too, is the need to connect with our homeland. Food is often at the heart of this, just as it is for the butterflies.

For Nina, it is her calling. She has spent the most recent segment of her career focused on writing and teaching about food, food systems, and food culture. Often, the focus is food as a means of preservation: of family, of culture, and of history.

“When you have a recipe, it’s like an artifact of an era, a family, a life, and a culture,” Nina says. And that artifact is often etched with very specific family markings. “If you look at the margins in recipes where someone in your family might have written a note — in my family it might be ‘no peas for Rich’ or ‘Shipra likes less cayenne’ — it’ll be different for every family.”

In her award-winning 2013 memoir, “Biting through the Skin: An Indian Kitchen in America’s Heartland,” Nina recounts her own food story, a braid of Midwestern and Indian culture pieced together from her childhood in rural Kansas and longing for a deeper understanding of her Indian heritage. At the center of her story are five recipes — the recipes she and her mother, unknowingly, carried with them as a remembrance of home as they became new brides.

Of these recipes and others she holds dear, she says: “It’s not just a story, it’s a story of us, because it’s becoming very specific for what is flavorful for my family, my relatives, and what tastes they appreciated more than others. To me, preserving that recipe tells me a lot more about my family than I ever would have known.”

As Nina watches the butterflies, the longing to reconnect with that story surfaces. “I thought, well, what about a reverse migration for myself?” she says. As she did in “Biting Through the Skin,” Nina continues telling her family’s story in an upcoming book, “Green Chiles and Other Imposters,” which will jump another generation back to her grandmother’s Bengali food story.

“She lived through the partition of India and colonial rule and the end of it, so she was familiar with both pre-colonial food and colonial food,” Nina says. “I wanted to find her story, because I think that her life was an interesting time.” Nina will be researching on the ground in Kolkata, India, for eight months through a Fulbright Global Scholar grant.

It’s important to her to save these stories from extinction — something she has seen firsthand. Artifacts from the Missouria Otoe Native American tribe who lived on the land that is now the Furstenau farm are now washed up in stream beds on the property. Arrowheads, utensils, many things they used to find and prepare their food; this is all Nina knows of them.

“They had a whole history and life that I really know nothing about,” she says. “I was thinking about why I don’t know much about them. In my kitchen, which is a modern kitchen, I don’t know how to make the foods they ate every day. Because I can’t imagine the processes they went through, I can’t imagine their life. So I’ve lost that connection. I think about that, in just my little piece of Missouri, and that’s happening all over the world. To me, every time that happens, you lose a culture, and it’s a world heritage lost.”

Recipes, especially when handwritten, she says, not only preserve culture, but people, too. “I can picture the scene of when she was writing it for me, or imagine her cooking it.” she says. “It preserves them for me in a way that is very alive and has energy. It’s not just a flat, ‘Aunt Mildred was a nice lady.’ I picture her sniffing a spoon, or putting a little bit of extra spice in a dish because she knows somebody she loves likes that. It makes the person seem like they’re still sitting with you.”

Another Midwestern writer, Donna Battle Pierce, has also experienced this bond with her family recipes. When Donna got the somber call telling of her grandmother’s passing, she was nearly 2,400 miles away from the family home in Mobile, Alabama. “I had always been her special grandchild; she was the one who taught me to cook and really made me love cooking, and told me all of her secrets,” Donna says. In lieu of attending the funeral, Donna’s mother suggested a different kind of celebration of life. “What I do want you to do,” Donna recalls her saying, “is invite all of your friends over to eat, and cook your grandmother’s favorite foods that she taught you.”

In her San Francisco kitchen, half a continent away, Donna pulled out her grandmother’s gumbo recipe and fired up the stove. As she cooked, she knew she wasn’t alone. “I get goosebumps whenever I talk about it,” she says. “I made gumbo of course, and I made her rolls, and I made ambrosia, but not only was it the best gumbo I have ever made — I have never had gumbo turn out that amazingly perfect before — but everybody who came was just raving and dying to be in the kitchen with me.”

It was then that Donna fully realized the power of preservation. “It was my real experience that when you pass down your recipes, you don’t go—there’s a little part of you that stays with the people who love you and that food,” she says.

A former fashion and business journalist, Donna’s work has since spanned the pages of local papers like the Columbia Daily Tribune and the Chicago Tribune, in national magazines such as Ebony, and on her own blogs, Black America Cooks and Skillet Diaries. Today, she’s focused on revealing the stories of black American chefs who have heavily influenced modern food culture.

“I’m writing a book about untold stories, stories that have been hidden,” Donna says. “What a lot of people don’t understand is what I believe has been a lot of co-opting of recipes that were created by black people, southern recipes, during a time when we did not have a voice.” The headliner is Freda DeKnight, the first food editor of Ebony and a close friend of Donna’s late grandparents. Freda’s cookbook, “A Date with a Dish,” is considered the first major cookbook written by an African American for an African American audience.

Donna connects on a personal level with these chefs. As an elementary-aged child new to Missouri, she took part in one of the most historically momentous events in modern America: school integration. Skin color was not the only dividing difference for Donna and her siblings as they navigated an even more unusually difficult season of life. It was food, too, that others, even friends, found divisive.

Instead of falling away from her traditions in response to criticism, she leaned in to them. Preservation comes with an embrace of who you are. For Donna, this realization spawned a career and kept her close to family through food. “Even though we were part of the great migration, my sisters and brothers and I, my parents were five generations in Mobile, Alabama,” she says. “The Gulf of Mexico and New Orleans — all of that was our food and our heritage. My family moved north to have a different life for their children, but the southern part, it keeps me tied to a region, to family, to a home, to happy thoughts of sitting around a table. If I ever need to feel closer, or need to feel belonging or any of that, I cook [those recipes].”

Preserving recipes saves much more than a dish. It’s a cultural or family artifact, a connection to the homeland, and a piece of the story of us. For Donna and Nina, and for all of us, that’s what’s at the heart of it all. “What is distilled into recipes from that culture is sort of like the end result of all the same things from every family in that culture,” Nina says. “It shows what’s important to them, what makes comfort, what satisfies hunger, what makes you well, what is tasty. All those things are sort of distilled into a collection of recipes for the culture, and to me that’s so precious. It’s like a gift.”

Take one whole chicken, skin, cut into pieces, and set aside (or use boneless, skinless chicken pieces, cut into approximately 1-inch by 2-inch pieces). One pound of cubed lamb or beef can also be used.

Cover the bottom of a heavy pan with vegetable oil and heat. When hot, drop in the whole spices and let sizzle for about 30 seconds. Add the onions and stir fry until the onions begin to brown at the edges. Push them to the side and add the sugar. Stir the sugar in the hot oil until it begins to caramelize and is mostly dissolved.

Next, put in the cut-up chicken pieces. Stir fry the chicken with the onions until the chicken begins to turn brown. Add the ginger, cayenne, garlic, and salt. Lower heat, add a little water if necessary, and fry until the meat is well coated with the spices (20 to 25 minutes — this long simmer is essential to bring out the flavor of the finished dish). Add about one cup of water. Loosely cover the pan and simmer until heated through (about 5 minutes). Add yogurt, sprinkle a little garam masala into the pan if you have it, and simmer an additional 5 to 10 minutes. Serve hot.

Heat oven to 425 to 450 degrees and place bread pieces in large bowl. Pour milk over dried bread and set aside for 5 minutes. Press milk into bread with a fork to make a thick paste, adding more milk if necessary. Set aside.

Divide crab mixture evenly among 6 individual greased crab shells or spoon into a large greased baking dish. Sprinkle bread crumbs over crab mixture. Top each crab shell with a 1 teaspoon drop of the mayonnaise without spreading. Bake until heated throughout, about 8 minutes. Spread the hot mayonnaise over mixture with the back of a spoon. Bake 3 minutes longer. Serve warm.