How Does Your Garden Grow?

Charity Goodwin overcomes perfectionism to embrace love for herself and others.

For as long as she can remember, Charity Goodwin, pastor of discipleship at Missouri United Methodist Church and mother of two boys, focused on achieving. Naturally industrious and competent, she loved to produce and she loved to win. She was self-assured and ambitious and could make things happen. Yet her overidentification with success came with a determination to project an inauthentic persona, one that was masking a sense of her own unworthiness.

Whether she was excelling in her school for the gifted, fluently speaking Spanish by fifth grade, or being awarded scholarships for her essays, Charity saw herself as a doer. She believed her projects and roles totaled the sum of who she was.

“I had gained my worth in the things I did,” Charity shares. “When I excelled, I felt like I was worthy and loveable and all of that. When those things didn’t happen, or I didn’t achieve in a certain way, like not getting an A, or a scholarship, or the grant, then it reflected like something was wrong with me.”

Today, Charity lovingly refers to herself as a recovering perfectionist.

“I love Oprah Winfrey because she talks about the difference between excellence and perfectionism,” Charity says. “Excellence is more of a striving, where perfectionism is about proving and wanting to be seen, so you overdo and over compensate.”

The Roots of Perfectionism
Charity and her twin siblings, who are three years younger, were raised by their single mother in St. Louis. “I was part of the desegregation program. That was a big deal,” Charity says. Her ambition insisted she attend Kirkwood High School for their award-winning journalism program. Her siblings attended elsewhere. “With three kids in different county schools, we had to maximize time, energy, and resources. My mom was always clear that we had to work hard, and we had to organize our lives to survive.”

Charity also knew that attending college required getting scholarships. Without internet, that meant going to the St. Louis public library to do research. Her scholarships would get Charity a ticket to the Missouri School of Journalism, something that still makes her proud.

She was driven by her natural personality and the values of her mother, but Charity also found herself striving to compensate for being a double minority. “It created another layer that fueled my perfectionism,” she says. “I felt like I had to outperform others.”

All the things Charity learned from her childhood became foundational tools until, eventually, they became all she knew. “Then it didn’t work,” Charity says. “Others would call these things achievement or productivity, but it wasn’t fully who I was. It was a fake, or a ‘hustle,’ as Brené Brown says.” 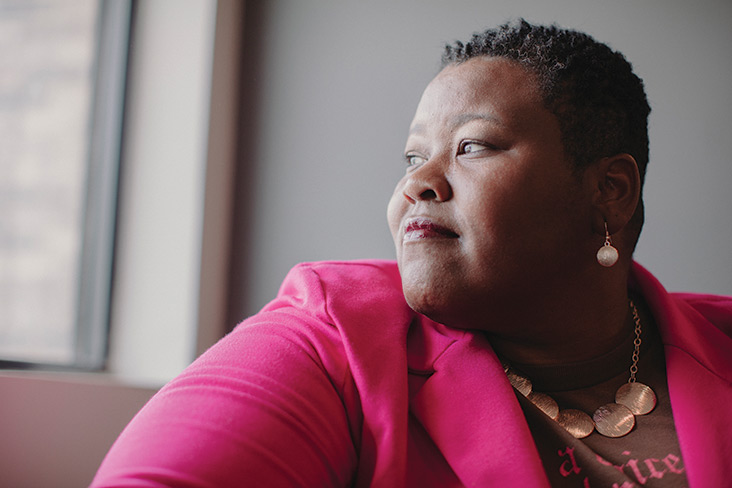 A Catalyst for Change
After finishing journalism school, Charity received her Master of Divinity degree from the St. Paul School of Theology in 2005, got married, started her ministry, gave birth to her son, Gabriel, in 2011, followed by Levi in 2013, and then she found her way back to Columbia in 2015 as a single mom.

Charity’s journey towards wholeness first began as she was exploring the beliefs of the United Methodist church in seminary. Through a mentor, she gained a new understanding of grace. “People would talk about grace being free, or undeserved, but there was something different about learning that grace was not contingent on me,” Charity shares. “It was liberating. It set me free to know that God loves me without expectation or judgement.”

With the seeds of this new understanding planted, the catalyst for significant change came during pregnancy. As she contemplated being a mother, Charity couldn’t help but notice the issues from her upbringing that were making their way into this new area of her life. Her faulty thinking needed an adjustment.

“Having a child changed everything,” Charity says. “He was the incarnation of grace.”

The path to loving herself was illuminated further when she learned that Gabriel was on the autism spectrum. “You can imagine how having a child with special needs changes some things,” Charity says. “You see that this kid needs additional support and help, but that doesn’t make him ‘less than.’”

Charity believes there was something in having Gabriel, and finding Brené Brown’s work, that helped her see she was actually playing small. While appearing confident, she was limiting herself. “I believed that if people saw what I was capable of, then I’d just start having more criticism,” she says.

Charity says her road to recovery has been a self-reflective, contemplative journey. From therapy to group work to journaling, all these things helped her go inward quickly and deeply.

“I often say that I’ve been saved from being judgmental,” says Charity. “I want to see myself and love myself as I am — with my scars. They’re still part of me. They are constantly being redeemed and making me who I am.”

A Bright Future
This fall, Charity will have the chance to put her new freedom to the test when she launches an innovative worship service within her church. “I’m excited,” she says. “I’m going to turn church on its head.”

Charity has come to realize that her motives and emotions matter. She wants to create and produce from a space of intentionality and contemplation — love and joy rather than competition and overachievement.

She hopes this authenticity will be evident at the core of her new work. “I want people to experience it and be comfortable growing into that space with me,” she shares. “I’m approaching it from the standpoint of everyone having a story to share and purposes for their lives.”

How will this venture be different? “It doesn’t have to be perfect,” Charity says. “We can experiment and have fun and there’s really no failure, and that’s a new perspective on success for me.”

Charity sees this season of her life as the formation of a constellation, the bringing together of all the things from her past that connect to create an expansive picture. Before, her success would have been about her reputation and accomplishments. Today, it’s all about valuing the inherent worthiness and potential of people and creating places for them to belong in our community.

“Learning to love myself allows me to love other people in a much more genuine way,” Charity says. And she’ll take that over perfectionism any day.