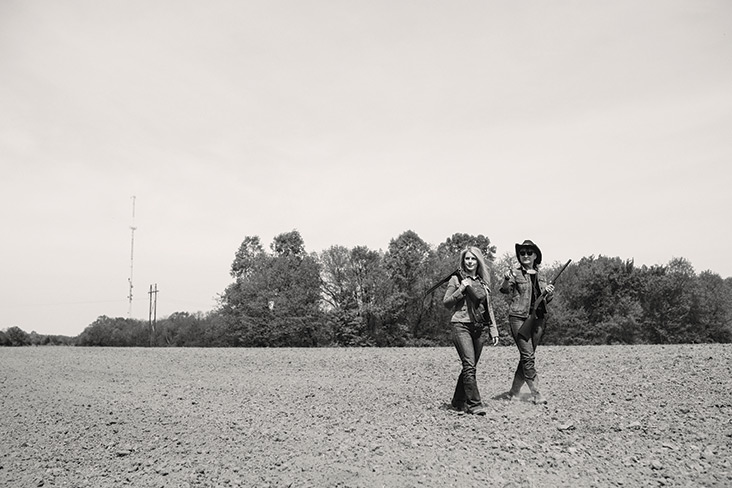 Eating on the Katy Trail

Marcia Thrasher and Deb Corkery answer the call of the wild.

Hunting and shooting sports have been dominated by men for generations; even the ambiguous term “outdoorsman” leaves women stuck inside. But according to the National Shooting Sports Foundation, women are the fastest growing demographic among hunters, with more than 3.3 million female hunters nationwide and counting. COMO Living sat down with two such local female hunters who share what the thrill of the hunt means to them. 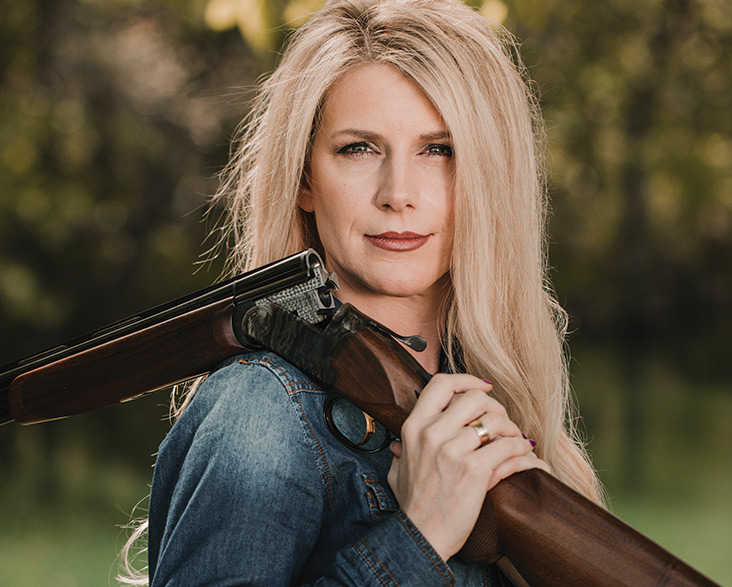 Marcia Thrasher is warm and energetic with a disarming smile. It’s easy to see how the 37-year-old excelled as a social worker for years before turning to her current career as a real estate agent. Her polished demeanor doesn’t jibe with the stereotypical persona of a woman hunter.

Though she grew up around hunting in her hometown of Shelbina, Missouri, Marcia didn’t discover her passion for it until five years ago, when she met her boyfriend, Evan, who’s an experienced hunter. Evan took Marcia to Prairie Grove Shotgun Sports to shoot sporting clays and get a little experience handling a shotgun and firing at a moving target.

“What I thought was going to be an intimidating experience turned out to be quite enjoyable,” Marcia recalls. “I thought I was going to be around a bunch of men — and I was, but they were very supportive in answering my questions, whether it was about gun safety or the sport itself.”

Dating Evan also meant becoming an adoptive parent to his German Shorthaired Pointer, Remington, a highly trained hunting dog who retrieves fowl on both land and in water. Marcia says her interest in quail hunting really grew from watching Remi at work.

“Evan and I took Remi out to a friend’s farm, where I got exposed to hunting with pen-raised birds,” Marcia says about her first time quail hunting. “That gave me experience with live targets and working with the dog safely without the pressure of being with other hunters in the wild.”

Remi’s job is to sniff out the quail and startle them into flying out of the brush, giving Marcia a clear shot. While Marcia didn’t have much beginner’s luck with the clay targets, it was a different story with quail.

“I was one-for-one! I got one on the first shot. It was incredible,” Marcia remembers with a big laugh. “I don’t know how Remi knows who shot what, but he brings the bird back to the right person every time. Every time we’re out, he does something new that I never thought a dog could do.”

Marcia says that when she downed that first quail, Remi turned to her with a stunned but approving look, then ran off dutifully to retrieve her prize. She had earned Remi’s esteem as a hunter.

“My bond with Remi became even stronger after hunting together,” Marcia says.

Marveling at Remi’s abilities isn’t the only reason Marcia brandishes her 20-gauge over-under double-barreled shotgun each fall in search of fowl; it’s had an impact on several other areas of her life. She says hunting has helped her relate to and meet the needs of real estate clients looking for recreational land. And it’s turned into a great couple’s activity for her and Evan.

Marcia says it’s also provided an unexpected outlet for relieving stress. “I think, with this sport, it’s more about the mental aspect than the physical. There’s that element of being out in nature that’s therapeutic for me,” she explains. “It helps me be more mindful and in the present. When I’m there, I need to be there. I get to be free there. I get to get away from the stressors of modern life and decompress.”

Marcia says hunting is just like anything else: The more you do it, the more confident you get. But she understands that at first it can be a daunting sport for women to crack into. “Women sometimes think that they had to have grown up on a farm to go hunting. But that’s not the case,” she says. “My [female hunter] friends come from all over — different backgrounds, different experiences. I would love to encourage anyone who’s thinking about hunting to try a shooting range or gun club, where it’s relaxed and there’s no pressure.”

Marcia plans to someday expand her hunting endeavors to include game in the wild, though that would likely mean leaving Remi at home. For now, hunting is a family activity that includes a beloved and trusty canine who tracked down a quail she took on her first shot.

“That shot gave me the confidence to think, ‘I can do this. This is fun. I might enjoy doing this long-term,’” Marcia says. “And I have.” 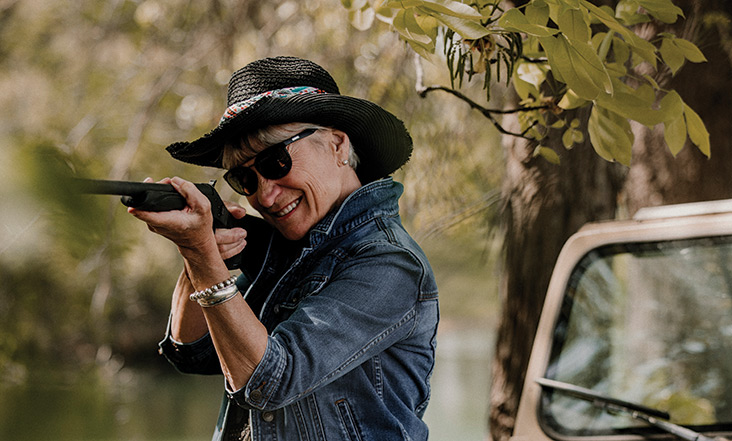 “Crisp early mornings, watching the sun rise. Just being out in nature, walking in the woods.”

That connection with the great outdoors is what draws Deb Corkery to hunting. At 65, the retired Gentry Middle School principal has been hunting, primarily deer, for about 30 years.

“I don’t need a gun to enjoy the outdoors,” Deb acknowledges. “I enjoy watching the animals. I’ve watched coyotes and bobcats play out in the field in front of me. Then you go back out in the evening and watch the sun go down. You just never know what you’re going to see.”

Retirement has also given Deb more time to spend with her two grandsons, who are four and six and visit often. There’s plenty of room for them to play outside, and she looks forward to teaching them about the outdoors as they grow.

Deb and her partner, Sam, hunt and fish on the 150 acres they own north of Columbia near the Pinnacles. She navigates two miles of trails to access her five deer stands. Each stand has a storied moniker, like “Three Does in Heat,” which is named for a time when Deb and two of her female friends holed up in the stand to hunt deer. Most of her female friends are hunters like her, and she still hunts with men she’s known since her childhood spent near the small river-bottom town of Gilliam, Missouri. Growing up, Deb remembers when the boys her age got their introduction to shooting.

“Growing up on a farm in the 50s, the boys got BB guns, and I didn’t. And I was envious of that,” she recalls. “I think that lured me into hunting. Over time, I learned how to shoot and acquired my own equipment for hunting.”

Today Deb hunts deer with a 260-caliber rifle. She hasn’t kept track of how many deer she has shot over the years, but she says she’s gotten one nearly every season she’s hunted, something she’s done more regularly since her retirement in 2007. She and Sam like doe venison and have some in the freezer every year, but Deb has taken enough bucks to pass on them unless they’re impressive.

“Sam says don’t pull the trigger on a buck unless it looks like Bullwinkle,” Deb laughs.

Deb says hunting is a popular sport nationally and needed in many places like Missouri for conservation efforts. In addition to deer hunting, she now has her sights set on turkey. “I’m trying to become a turkey hunter. That’s my new challenge,” she says. “I started hunting with a crossbow a few years back after I broke a few ribs because it’s easier to load than a regular bow. One time I shot at a turkey with my bow, and I missed it because I’d never shot the bow from the tree stand before. I didn’t know which crosshairs to use. The turkey jumped and feathers flew up and he ran off. It was hilarious.”

The growing popularity of hunting among women has made it easier for her to find hunting apparel made for specifically women, something she couldn’t find 30 years ago. And she embraces technology in her hunt, as well. “I’m learning there are apps for turkey calls on your phone. Who knew?” Deb laughs.

Regardless of the season, you’ll find Deb walking her land or enjoying the view from one of her deer stands. That visceral bond with nature is what matters most to her.

“If I never shot another deer, I wouldn’t care,” she says. “But I love watching all the critters. I can sit out there for hours on end and never be bored.”

Skeet: A sport in which the shooter fires at one or two crossing clay targets moving laterally to the shooter.

Trap: A sport in which the shooter fires at clay targets moving away from the shooter.

Sporting clays: A sport in which the shooter fires at clays moving in all directions.

Shotgun: A firearm with a long barrel that is smooth inside. The smoothness allows a cartridge or shell filled with shot to glide down the barrel without friction. The shot has a wide scatter when the shell bursts upon firing. Shotguns may have one or two barrels; two-barreled shotguns may have side-by-side barrels or an over-under configuration in which the barrels are stacked vertically.

Rifle: Like a shotgun, a rifle has a long barrel, but the barrel wall has spiraled grooves. The grooves make the bullet spin out of the barrel, which causes the bullet fire straighter and travel faster.