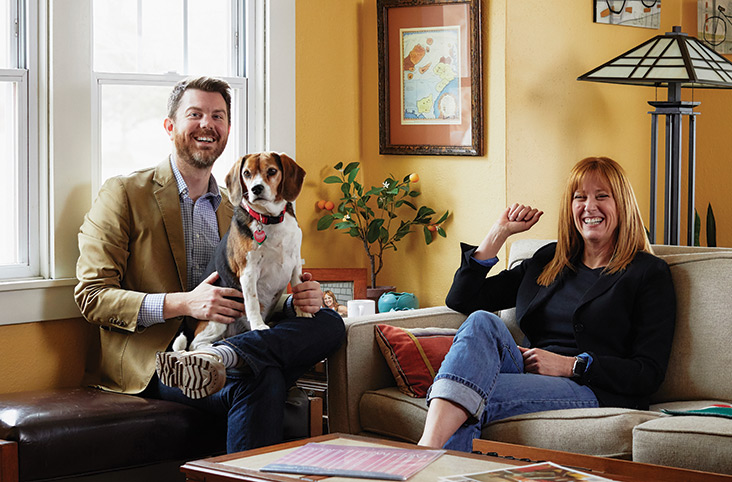 When Carrie Gartner and Jonathan Sessions began looking for their future home, they knew they wanted a house with history. They also wanted it to be small, manageable, and in the central city. “We’re not McMansion people,” Jonathan explains.

Carrie and Jonathan sought a craftsman-style house with room for change, but not a space they would have to take down to the studs for a complete overhaul. The 1926 bungalow on Aldeah Avenue was only the second house they looked at; they moved into the home in April of 2012.

“We bought the house, and the minute we left the bank with the keys, we came here and painted,” Jonathan says. Carrie adds that Jonathan also bought them a pair of Nerf guns, and they proceeded to have a Nerf fight through the empty rooms in their new home. 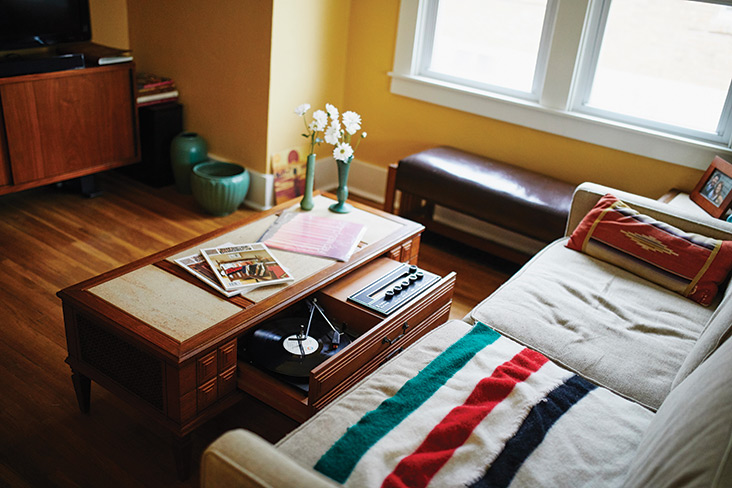 The couple began the “re-muddling” process, as they call it, with the goal to have their first party in the home within a month of moving in. It was an ambitious timeline, but one they stuck to by addressing each issue as it emerged and implementing solutions that would stand the test of time.

Some of the issues were fixable quickly. (“It’s a weekend project, but it’s a weekend project that makes the world a lot easier,” Jonathan says of a bookshelf he built.) Other projects required more intense maintenance, like rewiring the house’s electrical system. The expertise Jonathan picks up in his day job as the owner of Gravity, an electronic repair shop specializing in Apple products, came in handy for that.

“A lot what needed to be done you would need to hire someone for — unless your boyfriend happens to do computer repair all day long,” Carrie says.

For another particularly memorable fix: Carrie and Jonathan knew the best solution to a shoddy lighting job over their kitchen sink would be for Jonathan to access the problem area through their attic crawlspace — a less than appealing prospect for anyone. “I said ‘OK, you’re 33. Do you want to be crawling in the attic when you’re 43? Or 53?” Carrie says, laughing. “This is the time, the only time. You’re not getting any younger, and crawling in the attic strikes me as a young man’s job.” So Jonathan braved the attic. 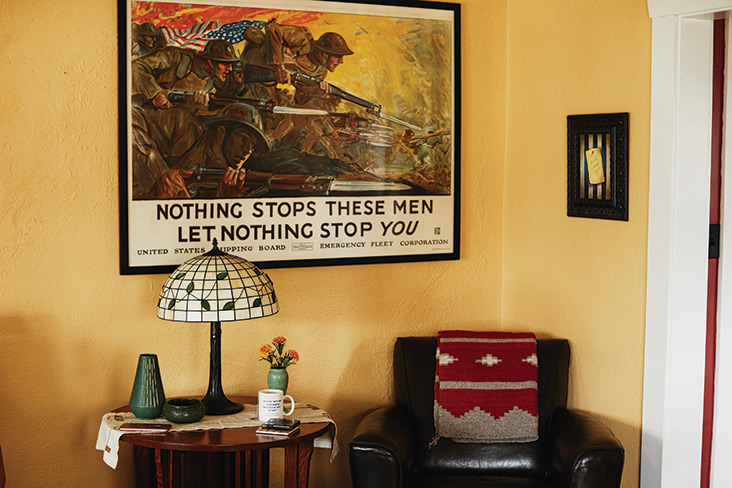 Carrie, a California native, grew into her love for craftsman-style architecture and arts-and-crafts design through her parents’ influence. She started a blog about her and Jonathan’s home, Como Bungalow, so that her parents could watch their progress from California.

Carrie’s parents were also instrumental in painting the exterior of the home and helping the couple plant a large river birch tree.

Along with their landscaping of the front yard, the couple also replaced the front stairs and removed existing landscaping from their back and side yards — picture a lot of lava rock and yucca plants.

After fixing drainage and wiring issues in their backyard, Jonathan and Carrie also added a couple “dog bubbles” to their fence so their beagle, Wyatt, can see what’s happening on their front lawn.

The couple plans to continue to improve their outdoor space by adding a fire pit and, eventually, a bocce court. 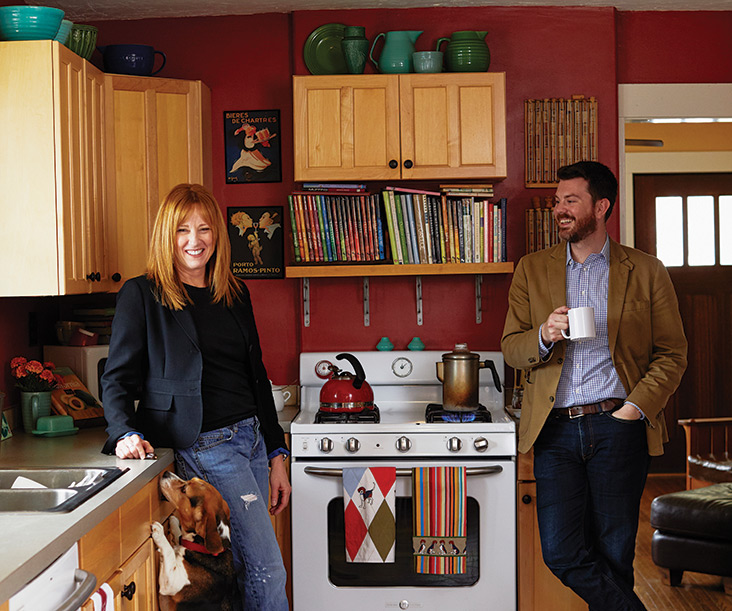 Inside, the home has undergone several rounds of improvement. Jonathan and Carrie have replaced every hinge on every door, every outlet, and every doorknob. They’ve painted every room and all of the trim, all while maintaining the historical integrity of the home.

In picking paint colors, Carrie referred to a set of Sherwin Williams paint cards that she’s held onto for several years. They feature arts-and-crafts-style paint colors and palettes to help pick shades consistent with a home’s overall look. Carrie and Jonathan have used these cards for every room in their house.

The couple replaced their HVAC system, and when replacing the old floor vents, they made sure to find vents that replicated those originally in the home, something that was surprisingly easy. “Part of what you don’t realize is when you have an old house is there’s a whole industry built up that builds reproduction hardware,” Carrie says.

This attention to detail is present in every aspect of their home. Their wooden front door from Boone County Millwork opens into a sunny yellow living room, replete with warm wood accents and unique artwork. To the left is their guest bedroom, which flows into the Jack-and-Jill bathroom that connects to their small master bedroom. 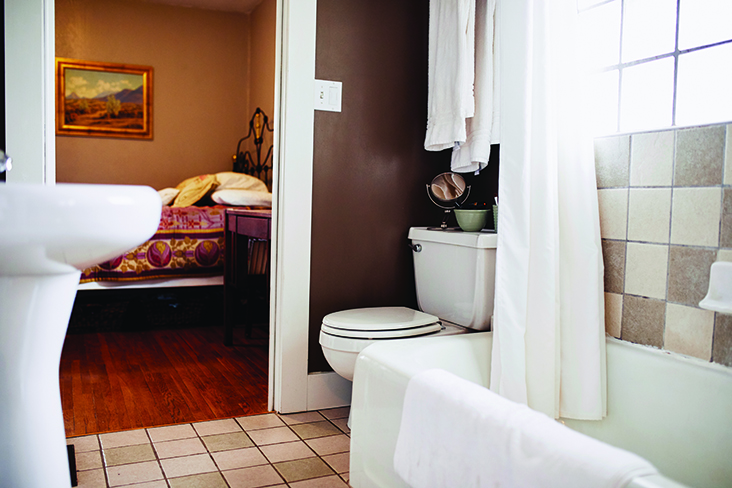 Behind the master bedroom, on the backside of the house, is the couple’s shared office space. Surrounded by windows, the room perfectly suits Carrie and Jonathan and is comprised mainly of a long, narrow desk made from an old wood door.

The couple had Koonse Glass cut a piece of glass to fit the desk, which they later removed and had re-sized when Jonathan changed his side of the desk into a standing desk that raises and lowers at the push of a button. 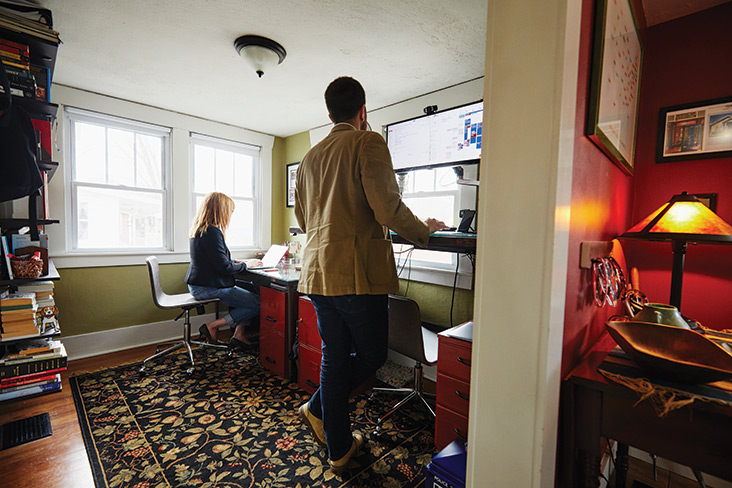 The back office leads into the eat-in kitchen, which is painted a sturdy, deep red that contrasts nicely with the dark wood of their kitchen table and chairs.

The kitchen also features a set of rectangular stained-glass windows that glow with the afternoon sun. Carrie’s father made these windows sometime in the 1970s after taking a glass-making class. They sat untouched for years in the family’s home before Jonathan commissioned a friend to fix them up; they now fit seamlessly with the house’s original windows. 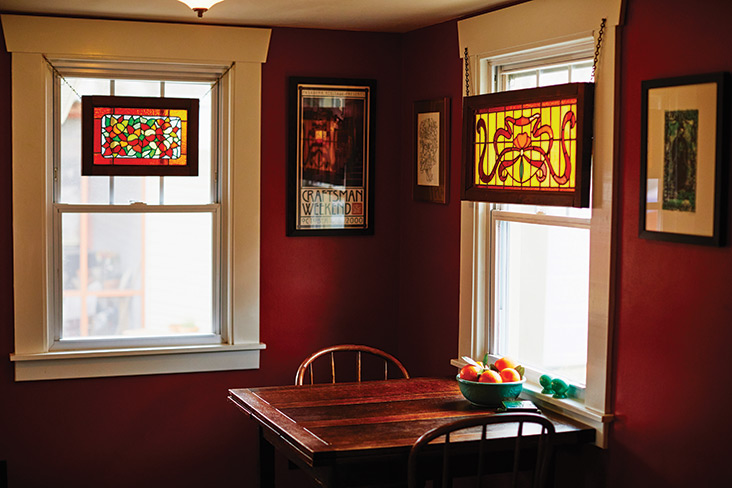 A reverence for the past and its importance in the present manifests beautifully in Carrie and Jonathan’s home. To dig deeper into the theme, the couple wanted to learn more about their home’s past, and this search resulted in the home’s history being dropped on their literal doorstep. 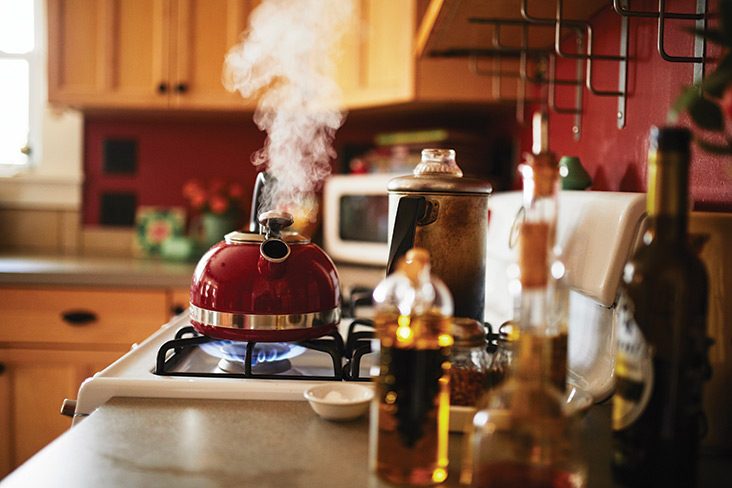 Carrie started by heading to the Boone County government building to look up previous owners of the house. She came back with a list, and Jonathan called a woman who owned the home in the ’90s. She told the couple she had the abstract for the house and would drop it by. A year later, on Halloween night, the couple found the bundle of documents sitting on their front porch.

“So, while everyone was running around in costumes and going to parties, we went to Top Ten Wines, got a bottle of wine, and just started reading it,” Jonathan says.

The documents date back to the original purchase of the land on what is now Aldeah Avenue. The abstract makes the home’s history uniquely tangible, as one can feel the effects of time on its thin, yellowed pages.

The past is present in this home — in part because of its age, but also because of what Carrie and Jonathan have chosen to fill it with. Most of their furniture and artwork are antique, and much of it has been passed down or handcrafted by family and loved ones.

The home feels deliberate, each decision thoughtfully made with the house’s craftsman style in mind. It is a testament to Carrie and Jonathan’s shared passion for history and for making the present a better place to be. 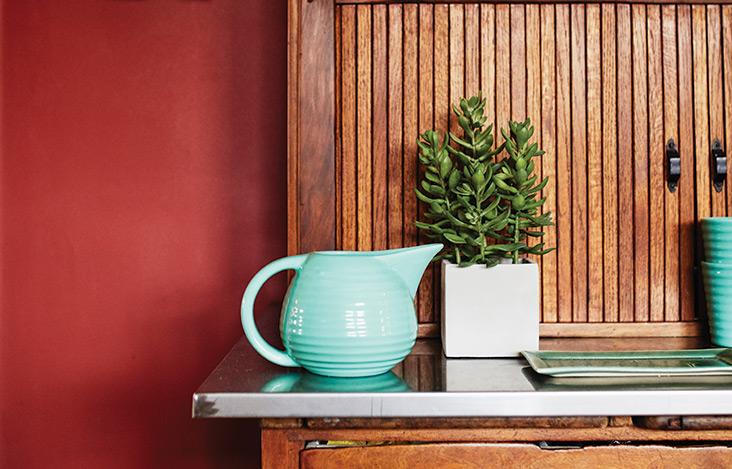