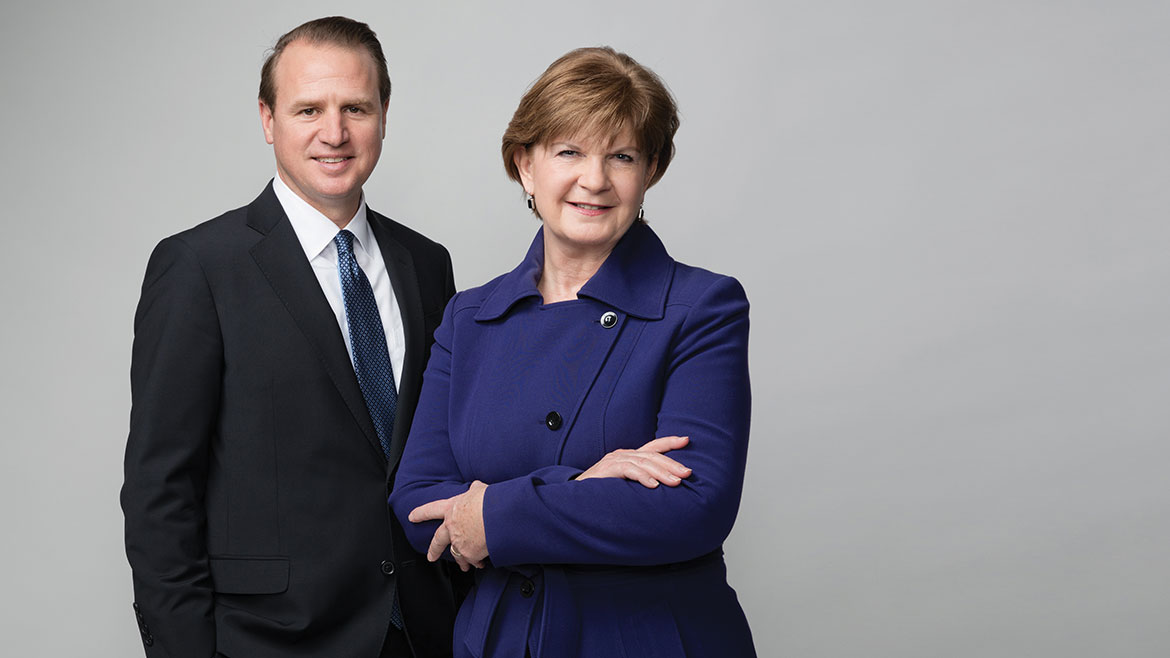 Retirements are a big deal at Commerce Bank, but they’re an especially big deal when the person retiring is Teresa Maledy.
Maledy started as a part-time teller with the bank more than 37 years ago; last month, she announced that she’ll be retiring as CEO and chairwoman of Commerce’s central Missouri region. She’ll cede the CEO role to Steve Sowers, Commerce’s regional president and Maledy’s hand-picked successor. Their transition will mark the beginning of a new era for one of the region’s largest banks — even if the new era looks a lot like the old one.
“Right now, I feel very positive about it. I feel very serene,” Maledy says. “I’m a few years shy of the official age when a lot of people retire, 65, so the timing is good for my family, but I also know it’s really good for the organization. We have a really strong team in place, and the region and the bank overall are doing really well. I feel good about giving Steve the challenge now.”

The “challenge” is, of course, building on Commerce’s success, but also on creating a reputation for a Maledy-less Commerce Bank in Columbia. Since 2002, when she became the first female bank president in the 138-year history of Commerce Bancshares, Maledy has been one of the highest-profile bankers — and citizens — in Columbia. She’s served as chair of the Columbia Chamber of Commerce and was the chamber’s Outstanding Citizen of the Year in 2008; she’s served in leadership roles at nonprofits like the Heart of Missouri United Way, the Central Missouri Food Bank, and the Greater Missouri Leadership Foundation, among many others; and she’s guided young entrepreneurs through her roles in groups like MU’s Venture Mentoring Service. Last April, this magazine named her one of Columbia’s 10 most influential women in business. 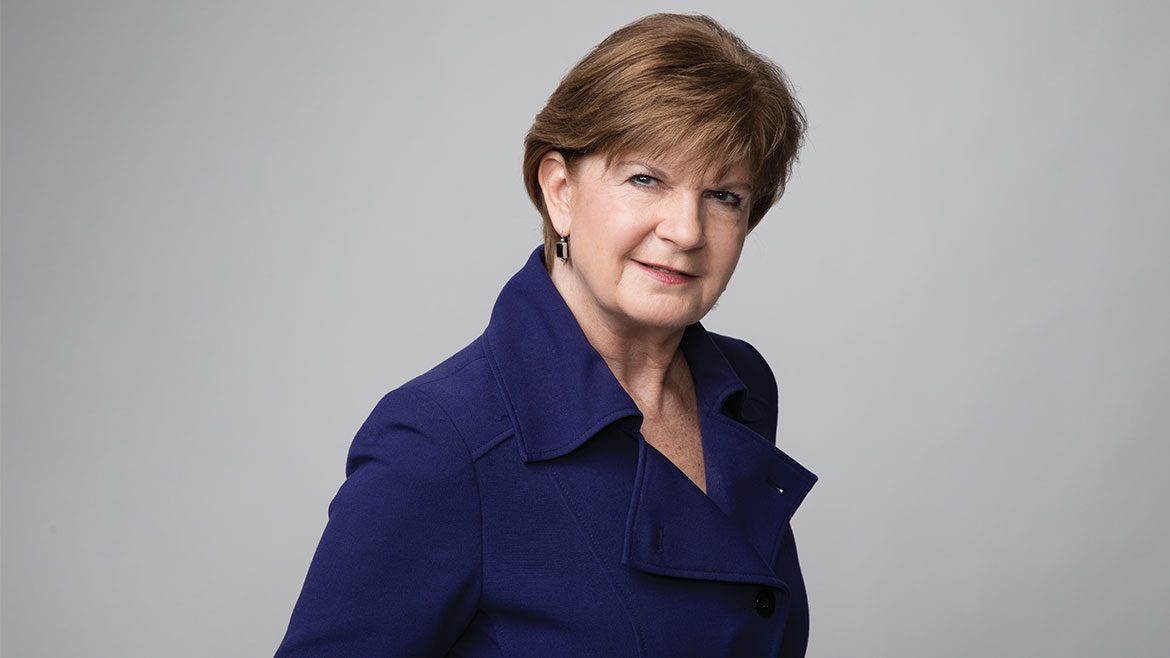 “Teresa’s presence in the community is unmatched,” Sowers says. “I would say she is, if not the most well-known, one of the most well-known and admired leaders in the community. Those are big shoes, and no one fills those shoes like Teresa does.”
Maledy began thinking about retirement a few years ago, and Sowers was, to her, an obvious candidate for the CEO position. Commerce has a rigorous succession planning process; since Maledy designated her successor, she and the bank have been grooming Sowers to be CEO. “He’s very, very intelligent,” Maledy says. “He works well with internal team members and he’s always been very effective with our client base. He’s very articulate and organized, and he’s also able to adjust to the different levels of intense focus needed at different times. And he does it very calmly.”
Sowers has spent most of his career in the bank’s commercial services side, but he’s added more duties across the board as Maledy’s retirement has drawn nearer. Another responsibility has been choosing his own successor — Commerce promoted Sarah Dubbert to Sowers’ former role of commercial division manager in July. “She’s an extremely talented individual and has hit the ground running,” Sowers says.
Both he and Maledy see Commerce’s succession planning as a testament to the bank’s durability — you don’t stick around for a century and a half without giving some serious thought to changing leadership between generations. “It’s a very thoughtful process — so there’s planning, there’s different steps that you take at different levels to be prepared so these things are as seamless as possible,” Sowers says. “We’ve been around for 150 years, and we want to be around for a long, long time, so that stability and that continuity is very important to us.”

“It’s been very busy. And very exciting, for different reasons,” Maledy says about the last few weeks.
“There’s excitement and appreciation for Teresa and what she has going on in her life,” Sowers says. “And we’re also just grateful for the team that we have and the strong company we have. We know we’re well positioned moving forward.” 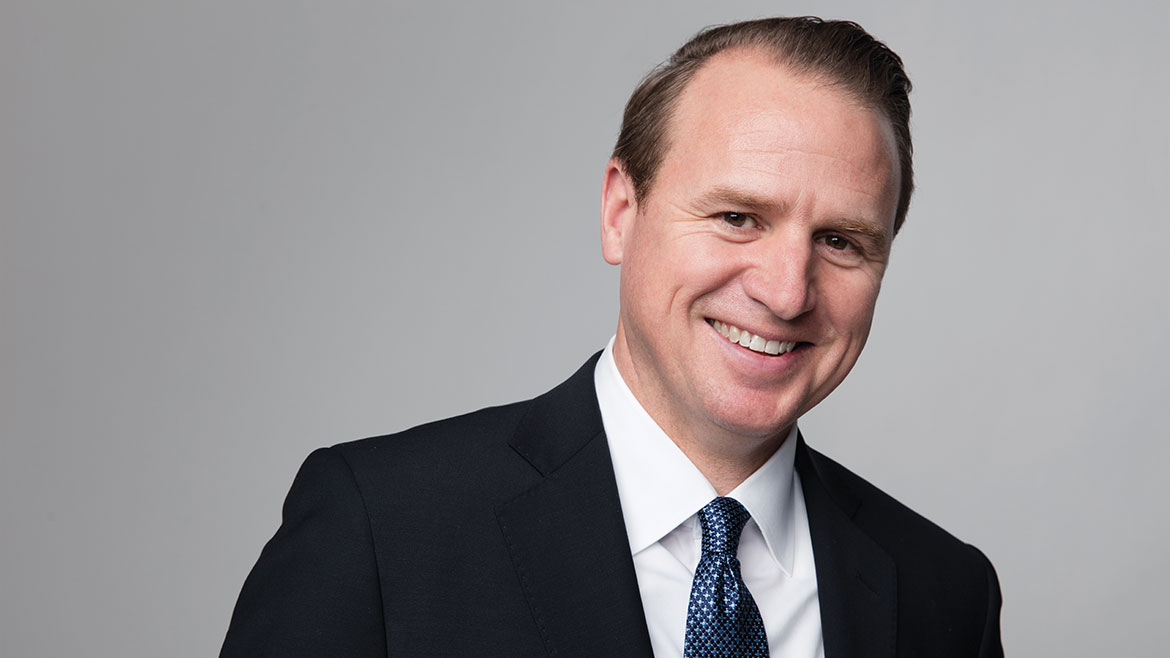 Maledy’s last day will come in June. The next few months will see a quicker shuffling of duties — now that her impending retirement is official, Maledy and the rest of the bank can be more transparent about Sowers having new assignments and responsibilities. But it’s also a time of reflection. Maledy’s career track — from part-time teller to CEO — tells a story of ambition and relentless hard work. What form will that take now that her professional career is ending?
“I’m sure it will feel different when I walk away that last day,” Maledy says. “I’ve been with Commerce for over 37 years. But I do intend to be very active with my children and also in the community. I don’t think I’ll get bored.”
Shortly before announcing her retirement, Maledy also announced her candidacy for Columbia Public Schools’ Board of Education. She says that Columbia’s public school system was one of the main reasons she moved back to her hometown from Kansas City. She’s been a supporter and volunteer for various education-related causes throughout her career, from campaign committees for bond issues to early childhood education advocacy, like the Cradle to Career Alliance. She retires on June 30, around the same time her official school board duties would begin if she’s successful in her campaign — five candidates, including Maledy, are competing for two open spots on the board.
“I really see the school board as a way to publicly serve the students, and I’ve been doing that for 20 years sort of more behind the scenes,” Maledy says. “So I see this as another way to do that.”
She’s also planning on spending more time at the gym, supporting her kids in their extracurricular activities — stuff she hasn’t had as much time for while being a banking executive. And Sowers says the culture of community involvement she’s helped build at Commerce will continue past her time with the bank. “We have employees who are very involved in the community in different ways, and Commerce as a company supports the community in different ways, and that won’t change,” he says. “The commitment will stay consistent. We’ll be stepping up to help.”
Retiring after the end of a long, successful run with one company is a particular point of pride for Maledy, especially given her admiration for Commerce and the Kemper family, which has owned the bank for more than 100 years.
“I guess one of the important things, as I look back on my career, was I always felt I was open to new challenges, and I actually sought them out, because I like to learn and I like to try new things and stretch a little bit,” Maledy says. “The great thing for me when I got to Commerce Bank was I got to stay with one organization and continue to grow and develop and have those opportunities and challenges within one organization. I was able to work in different markets and in different positions in the company, to have different challenges all within Commerce Bank.”