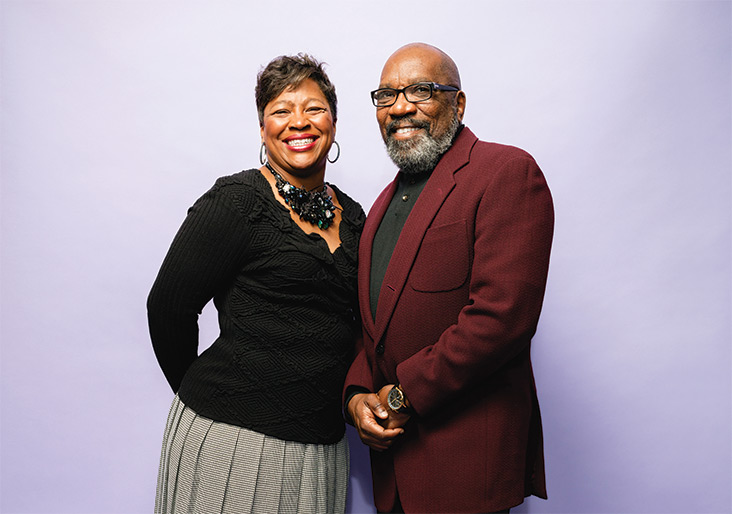 Clyde and Sheila Ruffin have called Columbia home for 36 years.

Modern families often find themselves scattered across great distances; it’s uncommon to find generations of families putting down roots in one town, especially a college town like Columbia. Yet the families that do, like the Ruffins, who span three generations in town, develop histories tightly woven into the fabric of their city. The Ruffins’ stories revive memories of what Columbia used to be and, quite possibly, where it’s headed.

Like so many who come to Columbia, Clyde and Sheila Ruffin moved to Columbia from St. Louis, in 1982, thinking it was a short-term stint. Clyde, a Kansas City native, had big plans for an acting career in New York City. It didn’t help that, with Columbia’s small African American population, the Ruffins and their young children felt like outsiders at first.

Yet 36 years later, Clyde and Sheila, their four daughters, and their six grandchildren, are happy to call Columbia home.

In 1980, at age 23, Clyde was doing big things with African-American theater at Washington University, in St. Louis, when he was offered a part-time teaching position at the MU’s theatre department. He commuted back and forth from St. Louis for two years before accepting a full-time faculty position.

“There were a number of African-American theater students who felt they were being discriminated against, not being cast, not having the opportunity to explore their own culture at Mizzou,” Clyde says. “I was brought in to mediate that conflict.”

Sheila, who had worked in several department stores, eventually decided to stay home with their four girls, Mikisha, Joi, Candace, and Jessica, helping them adjust to small-town life where few of their peers looked like them. 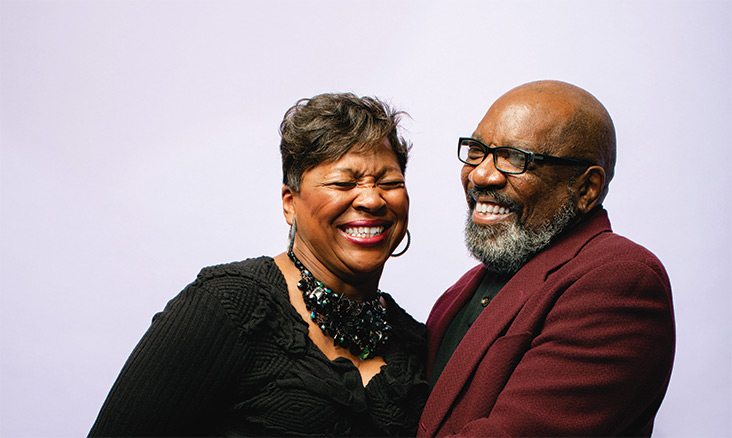 Sheila’s family moved to Chicago when she was 11, following her father’s death in Vietnam, and after seven years in St. Louis with Clyde, she was done with big cities — she particularly didn’t like their higher crime rates. Though Columbia was small, with no retail stores or even barber shops that catered to the black community, Sheila was glad to be raising her children at Lake of the Woods, where it was safe for them to play.

“Moving here was totally different,” Sheila remembers. “The churches we visited were mostly white. The neighborhoods were mostly white. In school, the kids were usually the only African-American students in their room, so it was quite an adjustment. But I felt safer. I felt like I took a deep breath.”

Clyde was struck by the fact that there were no arts organizations in Columbia, and he felt a sharp divide between the university community and the African-American community in town. Clyde’s role as a theater professor would help change that.

“I think that’s where my position at the university came in handy,” Clyde says. “When I came here and they asked me to start this black theater workshop, one of the things I insisted on was being able to have open auditions for people in the community so we could start to build a bridge between town and gown, the invisible barrier between the town and the campus. That enabled me to build relationships in the community.”

With deepened community roots and a commitment to his students, Clyde was appointed chair of the theater department in 1990; he retired as professor emeritus in 2015. The Ruffins became active in Second Baptist Church, and in 2003, with nearly 30 years of ministry experience, Clyde became its senior pastor. In 2015, Clyde was elected First Ward city councilman.

Clyde and Sheila moved to their current home nearly 25 years ago, just down the road from their third daughter, Candace Ruffin, now 35, and her four kids: Elijah, 16; Ben, 13; Cadence, 7; and Caden, 2.

“One thing I really appreciate about Columbia is the diversity,” says Candace. “There are so many different ethnicities and people from different backgrounds. My kids have been able to have all different types of friends and be exposed to different things.”

Clyde and Sheila’s other two grandchildren are Micah, 9, and Mira, 7, the son and daughter of Mikisha Henry, 40, and her husband, Mike.

“When you live in big cities, so much is handed to you. You live in a very curated environment,” Mikisha shares. “Here, because there was very little, it was an opportunity for me to really go into my imagination. After living in a bigger city, I was so much more creative living in a smaller town like Columbia.”

Joi Ruffin, 38, also remains in Columbia, while Jessica Ruffin, 30, is currently attending the University of California-Berkley.

Today, the Ruffins see a Columbia community that is more accepting of those who come and go and better positioned to acknowledge its African-American heritage. “There is no question that we’re going to honor African-Americans who have made significant contributions to our community,” Clyde says. “I see the seeds of what I hope for. I hope my grandchildren will be able to receive a quality education and have experiences through the school system and community that will not compromise their self-esteem. We have a lot of work to do, but it’s certainly moving in the right direction.”