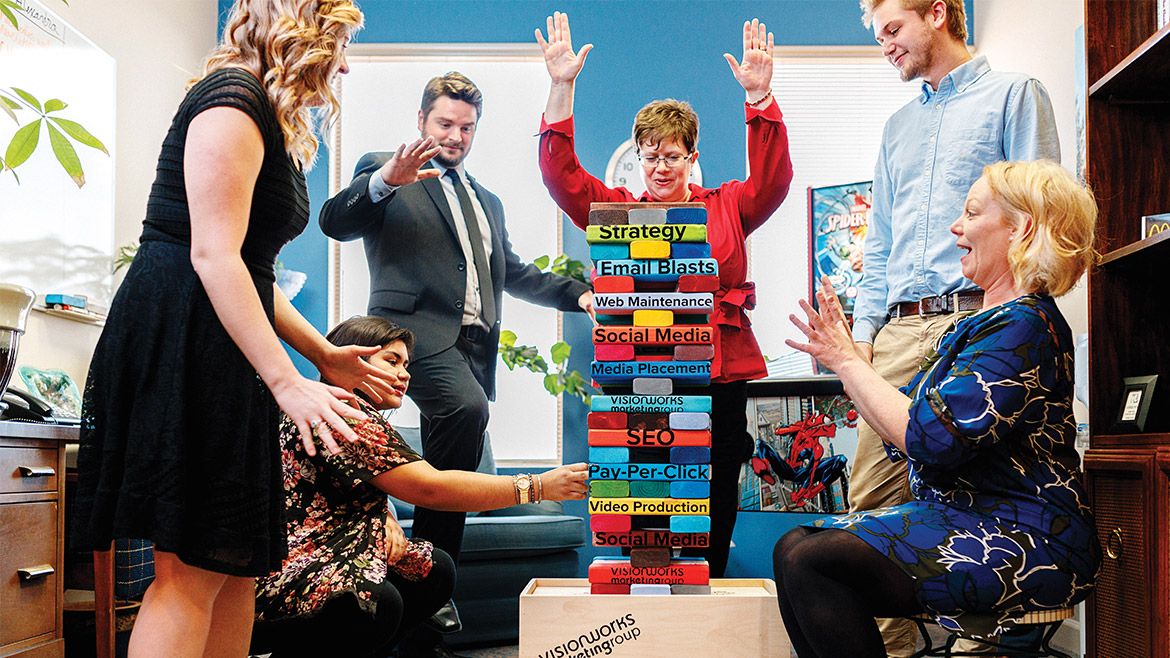 Do not challenge Lili Vianello to a game of pinball unless you’re prepared to be humiliated.

Last January, Vianello snagged a Spider-Man pinball machine at the Ronald McDonald House Charities Red Shoe Gala’s silent auction and decided it would be perfect for the the Visionworks Marketing Group office, located in a suite on Peach Way. It’s part of her efforts over the last few years to bring more fun to her company’s work environment.

“I love pinball, and I love Spider-Man,” Vianello says with a laugh.

This March, Visionworks, a full-service marketing agency, turns 23. Since 2011, the company has won 29 awards, including MarCom and Davey awards, for work it has completed for clients such as the Missouri Symphony Society, McDonald’s, the American Heart Association, and Flat Branch Pub and Brewing. In two-plus decades, Vianello has grown Visionworks from a part-time gig run out of her home to a full-fledged business with eight other team members and half a dozen freelancers. Each sports a business card with a quirky job title: Vianello is “Top Dog,” other team members are “Artful Dodger,” “Word Slinger” and “Rebel by Design.” The company is anything but humdrum.

“When I started the business, the fun stuff was having my dogs around — occasionally, they do come to the office here,” Vianello says. “I don’t know if I’ve mellowed over the years, but the Lili of 15 years ago wouldn’t have been comfortable with a pinball machine in the office. Now, I think it’s good for the psyche and good for the work environment.”

Even though business was booming, Vianello went through what she calls an existential crisis about three years ago. After running her own business for so long, she began to question her next move.

“I started something, blinked, and 20 years went by,” she says. “I started to question what was next. If I closed Visionworks, what would I do instead? After a year of pondering this, I decided I do want to do this, but not the way I’ve done it the past 20 years.”

Instead of doing something different, Vianello decided wanted to enjoy her work more. She began to infuse the Visionworks culture with more opportunities for professional development, community involvement, and team bonding.

For the last couple of years, Visionworks has been closing at noon every Friday to provide time for these activities. Professional development opportunities have included Leadercast and visiting a print shop in St. Louis (followed by a trip to the St. Louis Art Museum and a Cardinals game). They’ve volunteered at the Columbia Center for Urban Agriculture and the Central Missouri Humane Society, and some Friday afternoons, they stay in the office to play charades, challenge each other to a round of five-foot-tall Jenga, and have pinball tournaments. They’ve even been known to challenge their clients on the Spider-Man machine. 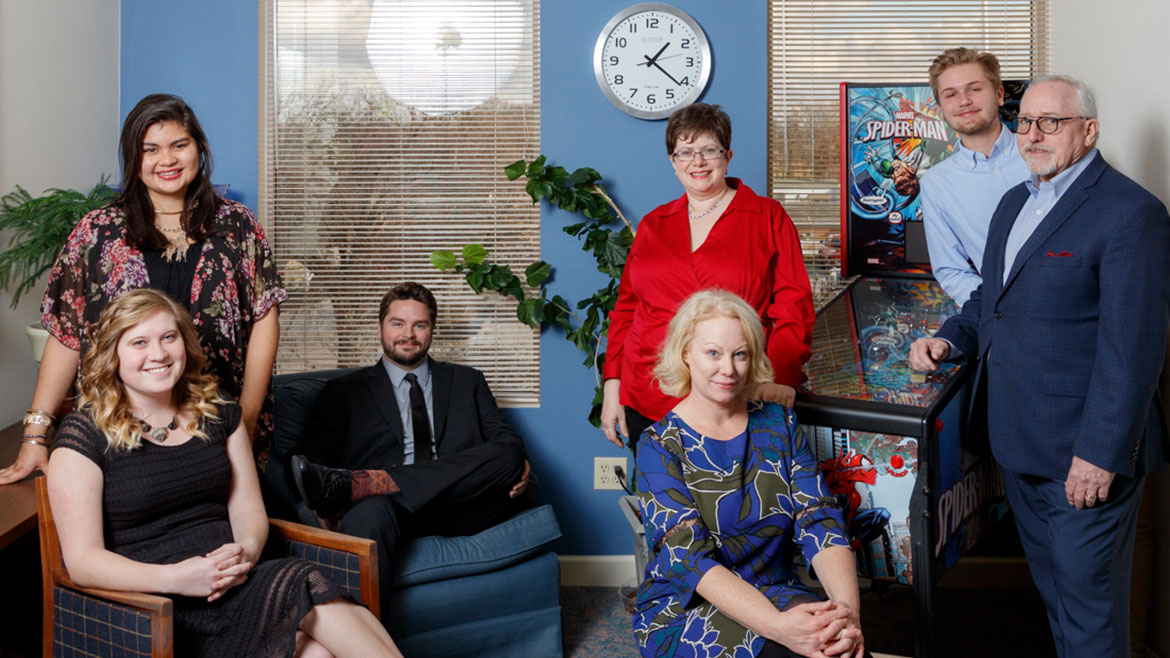 “When you have the opportunity to get outside of the work environment, it solidifies the team,” says Vianello. “We are what our business is. By that token, I want it to be fun. We spend more time here than with our family and friends.”

Melissa Boukezzoula, or “Sister Do-Much,” as her business card says, agrees that their Friday afternoon activities help build camaraderie. As project manager for the past three years, Boukezzoula has been on board to see the transition to a more laid-back workplace.

“Even before I came here, I knew the value of company culture. That will make or break it for some people,” says Boukezzoula. “Hats off to Lili for realizing that. It’s not so stiff and staunch. We’re laid back, but we also know when to put the pedal to the metal and get things done.”

Creating a relaxed yet energizing environment also has been a priority for Visionworks. The walls throughout the office don a variety of art pieces that Vianello has collected over the years. Boukezzoula has gotten the team involved in the Ellis Fischel Cancer Center Artful Bra auction, and particularly inventive pieces are proudly displayed throughout the space.

Vianello says the outcome of this upbeat work culture has been creating a safe place for the team to be creative and speak their minds.

“Having an environment where you realize it’s safe to say, ‘This could be better than it is’ is the first step to company culture,” Vianello says.

“It reaches a different place in the subconscious mind,” Shrum says. “It makes it a safe place to work. You know it’s okay to disagree with someone. It makes for candid, collaborative conversation.”

Building for the Future

As Vianello looks ahead, building and maintaining the Visionworks culture also means hiring the right team members. Whereas she used to hire employees she felt comfortable with, she now looks for people who will challenge her and take the company to new levels.

“I’m the continuity for 23 years,” Vianello says. “But I’m sure I wouldn’t be where I am without the people who have worked for me. I’ve had to go out and find the best people for the job.”

Vianello’s advice for creating a desirable workplace is to not force it.
“I think part of it is not necessarily having a plan,” she says. “I didn’t go to the Ronald McDonald House Charities gala with the intent of coming back with a pinball machine. You have to be adaptive and open.”

Vianello says it’s also about making a commitment to enjoy your work as much as possible: “I’m not a frivolous person. Most people would say I’m quite serious. But now I’m also serious about striving to have fun. A year from now, I want to be thankful for laughing more.”