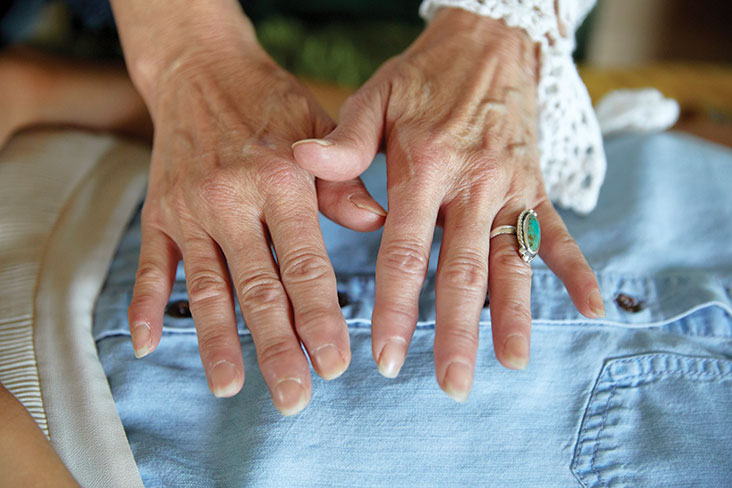 When we think of post-traumatic stress disorder, we often think of male combat veterans who have returned from war with immense physical and emotional trauma. Statistically, however, PTSD is more common in civilian women.

According to the National Center for PTSD, more than half of all women will experience a trauma in their lifetime, and women are more than twice as likely as men to develop PTSD as a result. That’s because women are more likely than men to lose a loved one suddenly or to experience childhood abuse, domestic violence, or sexual assault.

PTSD symptoms can include uncontrollable anxiety, avoidance of feelings, emotional numbness, and flashbacks. Trauma coach and childhood sexual abuse survivor Cherie Doyen says those with PTSD as a result of prolonged trauma can also experience dissociation, or an involuntary disconnection from reality — she also refers to it as “reality hopping.”

Cherie says dissociation causes the trauma victim to shift between multiple and often conflicting realities. For the last two years, Cherie has been developing her own approach to healing trauma and helping women conquer their stress through astral travel, a voluntary out-of-body experience that allows victims to reconcile those realities and move from simply functioning to living.

A History of Trauma

“Outwardly, we had this amazing family,” says Cherie, 56 (pictured below), about growing up with her parents, brothers, and grandmother. But that wasn’t the truth. “I came from a background of severe childhood abuse. I almost died the first time when I was 6 months old. My dad suffered a lot of trauma himself and was trapped in PTSD, and that came out as a lot of pain to us. Our home was just riddled with violence.” 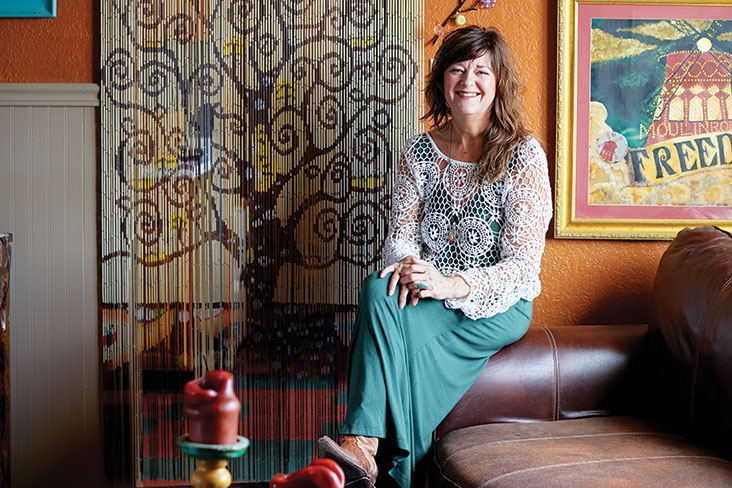 Cherie was repeatedly beaten and sexually abused until she left home at the age of 22. The resulting stress led to chronic health problems that followed her into adulthood. Despite these issues, Cherie opened a successful hair salon, got married, and had children. Her life seemed happy, yet she was haunted. Like many trauma victims, Cherie remembered only glimpses of the horrors she suffered as a child. But that changed when she became pregnant.

“It’s like amnesia,” she says. “I really didn’t remember anything until I got pregnant. I started having these flashbacks and my world just came crashing down.” Cherie says that remembering trauma during pregnancy isn’t uncommon.

Cherie was soon diagnosed with PTSD, and for the next 30 years, she would search for answers and healing in therapy and antidepressants, but she continued to struggle with her trauma. She decided to seek relief from alternative forms of therapy, traveling the world to study with shamans and medicine men to find natural, drug-free ways of coping with her immense stress.

Combining her knowledge of several traditions, Cherie found that she could channel her involuntary reality hopping into astral travel. By voluntarily revisiting each trauma during an out-of-body experience achieved through a meditative state, she could safely observe the trauma as a third party and resolve her emotions – all with the intention of re-assimilating personal qualities and characteristics lost at each moment of trauma.

“A person, when they’re faced with trauma, leaves their body. They dissociate from their body,” explains Cherie. “With me, you’ve got a kid who dissociated for the first time at six months old. This person dissociated, and where I came back to is not exactly the same place I left. So, you’ve got a person at 6 months old, 9 years old, 10, 12, 19, who has dissociated with each trauma.”

Cherie uses each doll in a paper doll chain to illustrate how individual traumas caused her to dissociate and leave that version of herself behind in a perpetual linger, trapped in the moment of trauma. Cherie’s trauma coaching method is based on the idea of reintegrating each previous version of the survivor, like folding each cutout in the paper chain together into a single doll.

“PTSD becomes not about getting it out of your body, but reintegrating the versions of you left behind [from dissociating],” she says. “It’s a rescue mission. Let’s go get each version of you out of those moments and bring them home.”

A Mission to Heal Others

Heather Erickson, 46, began trauma coaching with Cherie in April. Like Cherie, she had suffered grave abuses during childhood, but she couldn’t remember them. At 32, the death of her grandparents triggered severe panic attacks, uncontrollable crying episodes, suicidal thoughts, and disturbing flashbacks of her childhood. She checked herself into a hospital and was diagnosed with PTSD.

“I had a beautiful life with my two daughters. I owned my own café that was very successful,” Heather says about life before her diagnosis. Heather was forced to close her business and returned to her native state of California to stay with family on several occasions.

Upon returning to Missouri earlier this year, Heather met Cherie through a group of women survivors that Cherie was counseling. Heather says she instantly felt a connection with Cherie.

“Cherie asked me, ‘What happened at this age?’ and immediately all the memories and emotions came back. And she said ‘Let’s go get her,’” Heather recalls of her first session, when she remembered a childhood version of herself that was left behind. “So literally, visually, I go into the situation and I get her and take her to a tree and tell her it’s okay, and that I’m never leaving her again,” she says.

Cherie’s method begins by briefly getting to know her patient without probing into her trauma, and then she opens their chakras, a process done to clear the body’s energy. Cherie says she forms a psychic connection to the patient that allows her to visualize the patient’s trauma timeline and ask questions that initiate astral travel to specific traumas.

Heather continued this trauma work with Cherie over the course of four months, continually reintegrating versions of herself that she had lost from trauma.

“I honestly felt like a piece of me had been replaced. I felt more whole,” says Heather. “It was absolutely miraculous. I’m calmer, but the most beautiful thing is the clarity. It clears out the junk so that I’m not battling that all day long. I’m accomplishing so much now.”

Heather is working on publishing a women’s magazine that focuses on healing, as well as a documentary on sex trafficking. Cherie has also turned to the arts to aid her healing process: three years ago, she published “Junebug,” an autobiographical account of her childhood, and now she is working to open Women Rising Sanctuary, a nonprofit dedicated to helping women survivors of sexual assault and domestic violence heal.

“We have an accountability as women to heal each other. We’re healers. We need to come together and unite,” Cherie says. “You do not have to suffer. It can be over and life can start. You can be in charge and choose who you want to be and how you want to be perceived.”

For many, the thought of seeing a therapist or psychiatrist for an emotional problem is daunting. The time commitment, expense, and thought of being vulnerable with a stranger can add to the stress of the problem at hand. That’s why some turn to another source — their pastor or minister.

“You get known for helping people,” says Tim Carson (pictured below). 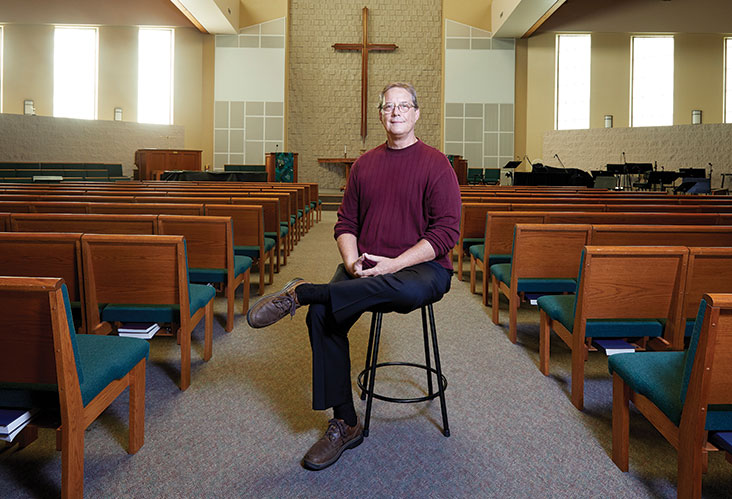 As the senior pastor at Broadway Christian Church for the last seven years, Tim has been trained in various forms of counseling to help members of his congregation cope with life’s challenges. He has offered counseling for grief, substance abuse, relationship problems, parenting issues, and PTSD. He is also the only pastor in Columbia who is certified as a practitioner of EFT, or emotional freedom techniques, commonly known as tapping.

EFT was first introduced in 1995 by Gary Craig, a Stanford engineering graduate and ordained minister who specializes in healing and self-help. On his website, Gary likens EFT to emotional acupuncture, but without the needles. The method draws from the traditional Chinese medicine concept of our life-energy, chi (pronounced “chee”), traveling through precise points of our bodies called meridians. In acupuncture, needles are placed at meridians where chi is blocked to help it flow freely, relieving pain, chronic conditions, and emotional disorders. EFT uses finger tapping on those meridians, instead of needles, to release problematic emotions trapped in our bodies.

“Trauma is a very specific thing that arises in a person as the result of an unanticipated event for which they are not prepared and do not have the resources to deal with,” Tim says. “That shocking moment is recorded neurologically and kept in your physical body, like ornaments on a Christmas tree.”

Tim says EFT is effective because it deals with trauma somatically, or through the body, while also using aspects of cognitive or talk therapy and energy therapy to heal mind, body, and spirit together.

“EFT goes to the story and gently taps while the emotions are surfaced,” Tim explains. “EFT combines somatic body therapies, cognitive therapies — because you’re actually surfacing the thoughts and feelings and allowing a person to reconstruct those for themselves — and this energetic approach, this understanding that the energy itself is going to make you better.”

When Tim meets with someone experiencing emotional trauma, he learns and then focuses on a particular story that’s causing them pain. He walks the person through each part of the story, speaking it aloud and having the person repeat it in short segments. Each segment ends with the affirmation “I fully and completely accept myself.”

Throughout the call-and-repeat process of walking through the story, Tim and the client tap through the meridians together. Tapping starts at the crown of the head, then moves in a cyclical fashion to the inside of the eyebrow, the temple, the boney ridge under the eye, the upper lip, the crease of the chin, the skin just below the collar bone, and finally to the side near the bottom of the rib cage. Each meridian is tapped seven or eight times before moving to the next, and the cycle is repeated until the end of the story is reached. Once a patient is familiar with the EFT process, it’s something he or she can practice alone without the guidance of a practitioner.

“We’re identifying either the thoughts or the feelings that are so troubling, and we’re tapping at the same time we’re exposing them,” Tim says. “You don’t tap your stories away. Instead, you tap the emotion out of the story. You metaphorically touch the wound and release the trauma so you’re not held captive by it any longer. It’s a systematic way of clearing so the energy system would flow again.”

Clinical studies have documented positive outcomes in patients who used this technique, including increased positive emotions, decreased physical pain, and less sensitivity to phobias. Tim says this is because tapping stimulates the amygdala, the part of the brain responsible for memory, survival instincts, and emotions, and affects cortisol levels, the hormone our bodies release during stress.

“As you are tapping, you are soothing the pathways to the amygdala,” Tim says. “It actually changes your brain’s functioning when you tap. It brings down respiration and reduces heart rate. Cortisol levels have been measured before and after tapping, and they’re much lower after tapping.”

Tim devoted a section of his blog, Vital Wholeness, to help others learn about EFT. It features video tutorials of how to tap along with reading and other resources. For Tim, the effectiveness of the technique can’t be denied.

“My word of hope is this,” Tim says. “I have seen many people who have already been on long paths of healing. Alternative methods are often faster. Don’t be afraid to try something new.”