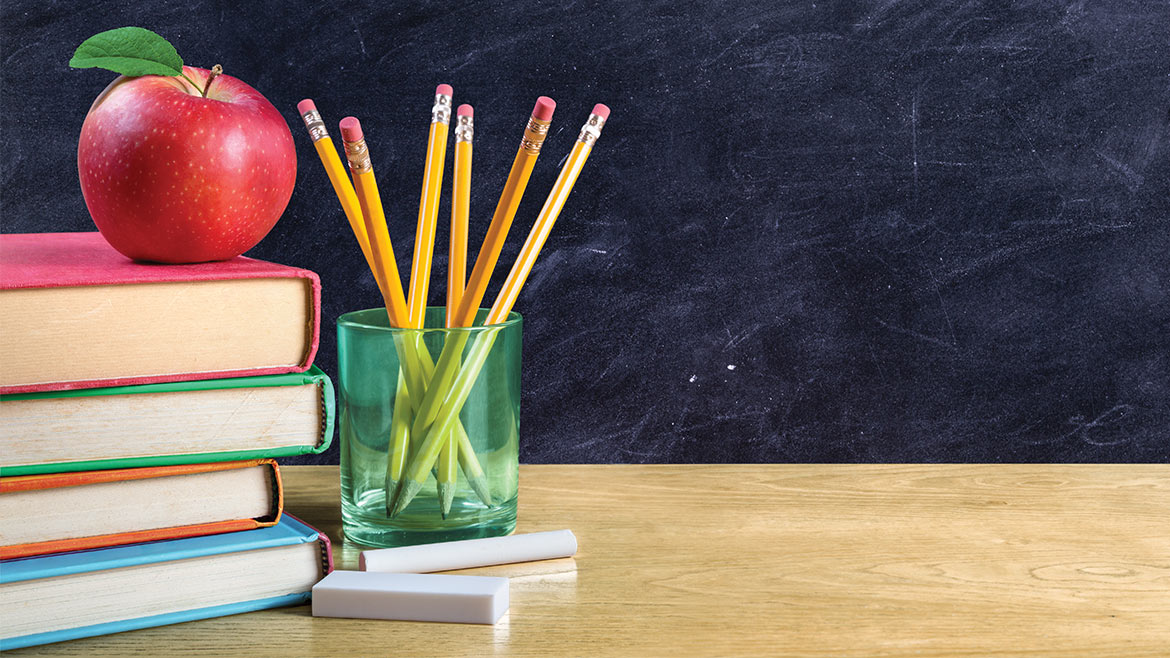 The Buzz on Family Biz

Columbia is and always will be an education town. While there’s plenty of coverage of MU, Stephens College, Columbia College, and Columbia Public Schools, it’s worth noting the other educational opportunities available for students in Columbia. Get to know some of Columbia’s private school options. 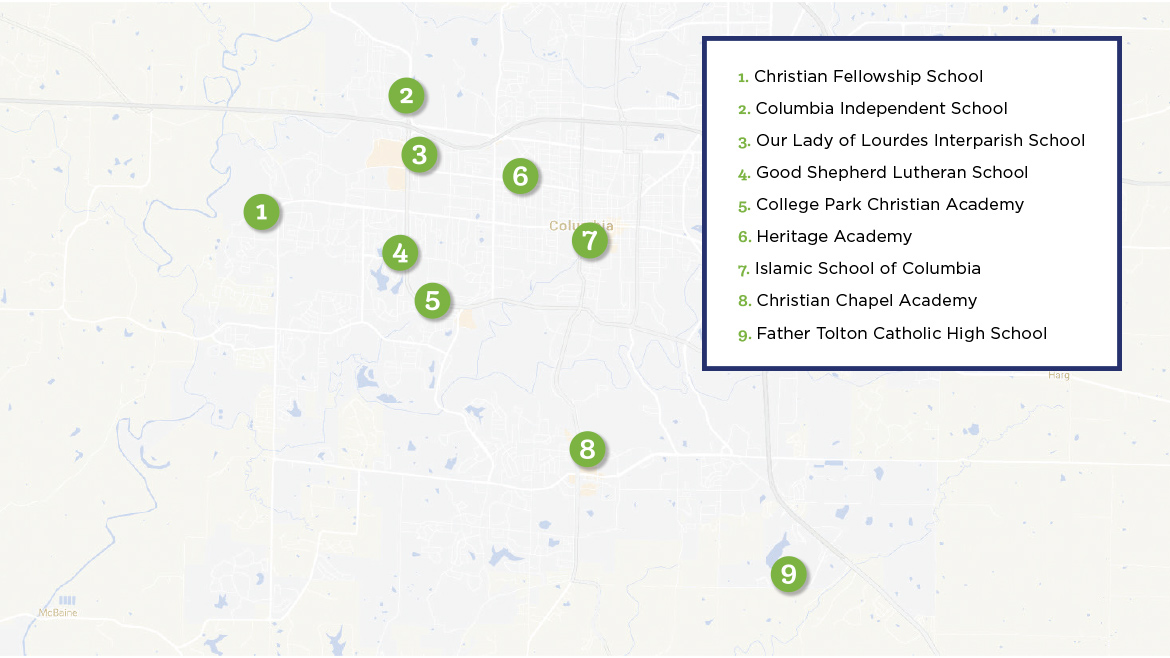 Founded by Christian Fellowship Church in Columbia, Christian Fellowship School follows the high school model outlined by the 1982 U.S. Department of Education report “A Nation at Risk,” requiring a full four years of English and at least three years of other core subjects in an effort to better prepare students for college and the workforce.

This summer, the school established a new security system and began the first phase of an extensive library renovation. According to Christi Wolverton, director of development and public relations, adjustments to the middle school model will take effect this fall. “We used to have our sixth and seventh graders stay with stationary teachers in their own classrooms,” Wolverton says. “Now, they’ll still have a home room, but they’ll rotate with other teachers” to better prepare for a high school schedule.

The high school schedule is getting its own changes as well. “The [Columbia Area] Career Center has fluctuated their start times, and that made it difficult for our students to get over there and get back in time to take their core classes,” says Wolverton. “We’ve restructured our schedule so that our high school kids can better take advantage of the awesome Career Center classes.”

Good Shepherd Lutheran School places a strong emphasis on community building and involvement. “We partner with parents so that they can be an active part of their child’s education,” says principal Tammy Mangold. Though the school primarily serves younger students, with National Lutheran School-accredited curriculum through the eighth grade, Good Shepherd encourages its students and their parents to participate in community service, partnering with several organizations in the community. And because the student population is small, Mangold says, “extracurricular activities vary each year depending on the interests of the student body.”

The school is associated with Trinity Lutheran Church of Columbia as well as Campus Lutheran Church. The two churches oversee the school together and make decisions collaboratively; although the school is housed at Trinity because of the size of its school facilities, both congregations share equally in the decision-making process.

Located in the northwest corner of the city, Columbia Independent School is the only pre-K through 12 private school in the area not affiliated with a church or other religious institution. New this fall will be a renovated space for the school’s Center for Inspiration, Innovation, and Investigation, known to students as CI3, or The Cube. The Cube is a makerspace used by students of all grade levels to promote exploration of STEM fields. The Cube’s previous location is being converted by CIS maintenance staff this summer into a junior kindergarten classroom, and a new Cube space will be unveiled in the fall.

Earlier in 2017, the new CIS Athletic and Arts Center opened its doors. The building contains a gymnasium and performance space. “With the addition of the Athletic and Arts Center, commencement was able to be held on campus for the first time in our 19-year history,” says Kari Dowell, director of admissions and marketing, “and we also hosted our first on-campus basketball games there in January. The expanded facility will allow us to serve more students in a more comprehensive way.” 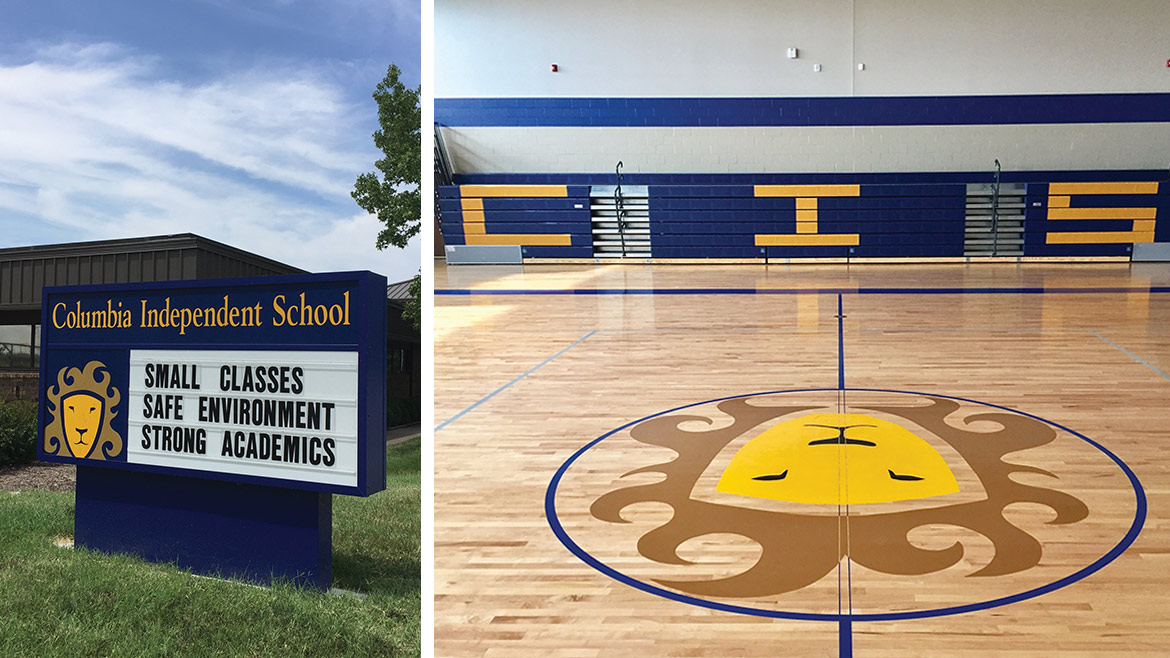 Named for a freed slave who went on to become a Catholic priest, Father Augustine Tolton Catholic High School was founded by the Jefferson City Diocese to establish a Catholic secondary school option for families in area parishes. Though many of the school’s students come to Tolton from Our Lady of Lourdes Interparish School, 25 percent of the student body is non-Catholic. All students take part in weekly Mass and annual faith retreats.

This summer, Tolton introduced a new work–study program, under which students participate in building maintenance, including painting and cleaning, to prepare for the new school year. The 2017 graduating class was awarded a combined total of more than $5 million in college scholarships, with some recent grads set to attend Notre Dame and Yale this fall. Principal Bernie Naumann credits the school’s rigorous college-preparatory curriculum and community building for its graduates’ successes. “Our house system promotes involvement, leadership, and service for the greater good by blending students from all grades into smaller communities,” he says. “These groups work together with a focus on faith-formation, team building, mentorship, and service.”

The Children’s School at Stephens College

Stephens College established The Children’s School as an experimental nursery  in 1925, designed to give the college students an opportunity to have direct experiences with children while getting feedback from professors. Today, The Children’s School features eight teachers and offers first through fifth grade classes in addition to its pre-K program.

Children’s School students are grouped into grades according to their ability, rather than their age, and the curriculum incorporates arts and sciences while emphasizing the development of independent problem solving skills.

The Islamic School of Columbia is housed in the Islamic Center of Central Missouri, a mosque and community center located downtown. The Islamic Center serves Muslim families who have been a part of the Columbia community for generations, as well as immigrants and international students from local colleges. The Islamic School serves students from preschool through fifth grade. “Our focus is to provide a rigorous curriculum while immersing our students in Islamic studies,” says school administrator Tae’lor Jones. “We work to meet the needs of each student no matter their background.”

Jones says a common misconception about the school is that English language instruction is not included in the curriculum. “In fact, we teach both English and Arabic formally,” he says. “Our teachers are dedicated to our students, families, and community.” In addition to the Islamic School’s traditional academic model, an after-school program is available for students who attend other public or private schools but still wish to take Islamic studies.

Columbia’s oldest continuously operating private school, College Park Christian Academy has been a part of the Columbia community for 73 years. The school recently brought on a new principal, Heidi Jorgenson, who took over the position from Stan Michael. In addition to her duties as principal, Jorgenson will also teach seventh through ninth grade.  A new kindergarten teacher, Valerie Haveman, will begin work this fall as well.

Jorgenson is looking forward to a new partnership between CPCA and Columbia’s homeschooling community. “This year, CPCA is expanding its ministry by adding a new social opportunity program that will allow homeschooling families to participate in worship, art, music, and other activities on Friday mornings from 8 a.m. to noon,” she says. Jorgenson views CPCA as a family, and she notes that parents have commented on the older students’ willingness to help younger children at the academy. She looks forward to showcasing renovated classrooms at an open house for the school in August.

Christian Chapel Academy offers preschool through eighth grade education in a non-denominational Christian environment. The school as it exists today grew out of the Developmental Learning Center at C2 Church on South Providence in Columbia. The school was founded to promote leadership in the community through spiritual growth, academic excellence, and personal responsibility.

The school will welcome several new staff members next year and establish an orchestra program for their middle school students. “We’re also excited about adding a LEGO robotics team this year,” says CCA Principal Rebekah Jouret. The team will meet as an extracurricular club to participate in the FIRST LEGO League. A coach leads the students in tackling a real-world problem, such as renewable energy or food safety, and in building a robot to compete on a table-top playing field. 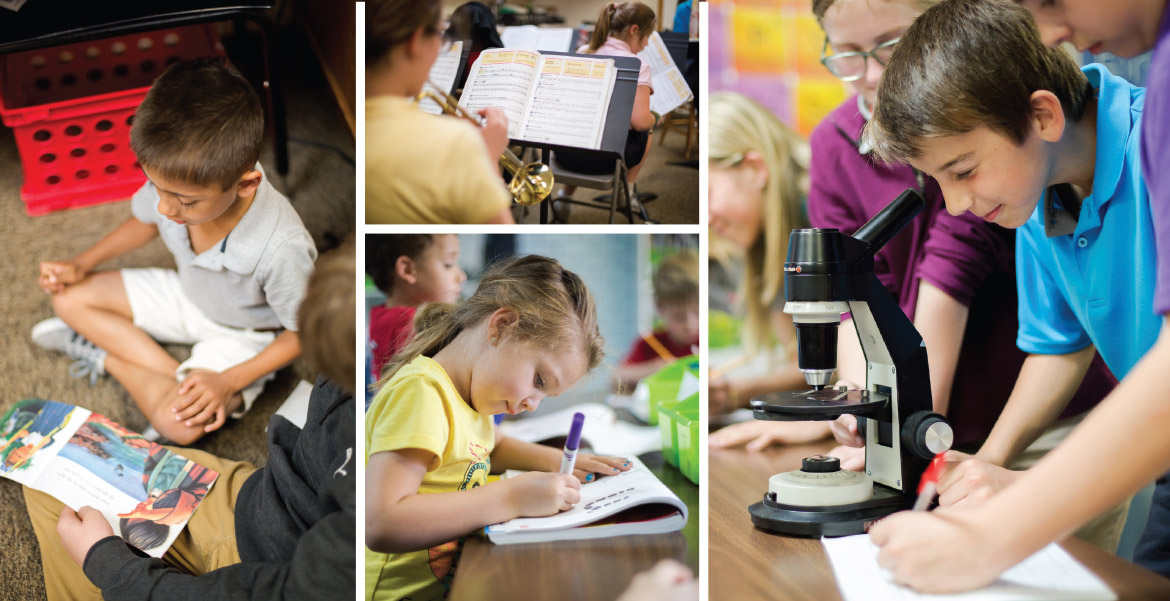 Heritage Academy is a college preparatory University-Model School, based on a structure developed by University-Model Schools International, an association of Christian private schools focused on the biblical imperative for parents to teach their children. University-Model schools, as the name implies, takes its structure from typical American colleges and universities. “Students are on campus only on Monday, Wednesday, and Friday, taking classes that they choose, which can be one or up to six each semester,” says Tammy King, interim chief administrative officer. The school is currently interviewing for a new CAO.

“This distinctive model allows for more time at home with the family,” says King, “which is a major part of our mission.” The University-Model program begins at the third-grade level, with class choice beginning in high school. Younger students attend half days on Mondays, Wednesdays, and Fridays. For all grade levels, Tuesdays and Thursdays are intended for independent learning via homework assignments. Parents are encouraged to take an active role in their child’s academic experience.

Our Lady of Lourdes Interparish School

The Our Lady of Lourdes Interparish School, formerly Columbia Catholic School, has been part of the community for more than 50 years. The school serves all three Catholic parishes in Columbia: Our Lady of Lourdes (where the school is located), Sacred Heart, and St. Thomas More Newman Center.

OLLIS recently announced plans for a large addition to its facilities, the result of a move by the Diocese of Jefferson City to expand Catholic school options in Columbia. “Bishop Gaydos gave his support to the concept of an addition on our current property, and we’ve moved forward with contractual and architectural planning,” says principal Elaine Hassemer.

Designs for the expansion will be released in the coming months, with fundraising efforts to follow. “The addition will enable us to eliminate the eight trailers and four classrooms in the rectory basement,” says Hassemer, “and to increase our overall campus security and educational environment.”

Grades: Pre-K through 6
Enrollment: 55
Religious Affilitation: None
Location: 1616-1618 Windsor St.
Director: Mary Windmiller
Year Established: 2008
The mission at Windsor Street Montessori School is to provide a Montessori environment, as prescribed by the American Montessori Society, where all children can thrive emotionally, intellectually, socially, and physically while developing a love of learning. The school is committed to working with parents and the community to provide an affordable and quality Montessori program for children of diverse abilities, economic, and cultural backgrounds. Windsor Street Montessori School offers educational programs for preschool, kindergarten, and elementary children ages 2.5 to 12 years old.