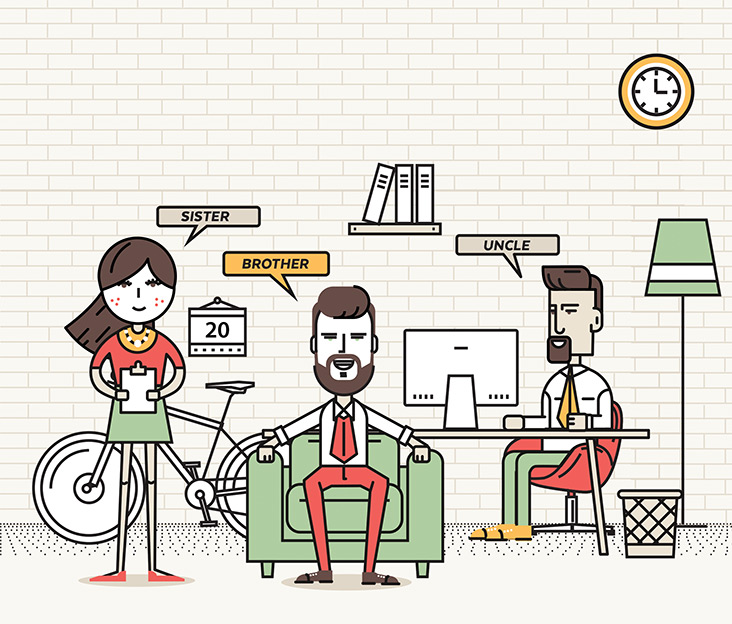 The pros and cons of working with loved ones.

In 1996, then MU student Melissa Murphy started working a few hours a week for her uncle Gary Turner and his business partner, Ron Elder, at their company, Johnston Paint and Decorating. When Melissa was hired on, she says, Vicki Wren Eultgen, one of the company’s interior designers, was fearful of Gary hiring within his family. She thought he might not be able to get rid of her if she ended up being a “cupcake.”

“To this day, Vicki and I often joke about my potential ‘cupcake’ status,” laughs Melissa.

When Melissa started working at the shop, her now husband, Blair Murphy (or Murph, to those who know him), had been working there for nearly 10 years.

“I had just turned 21, and he was almost 28,” says Melissa. “I was only working a few hours a week and really didn’t have much interaction with the ‘paint guys.’ This guy started calling my apartment, and my roommates did a stellar job of intercepting the phone calls and the doorbell. But he soon charmed my roommates, and the rest is history.”

Murph and Melissa currently own the business with her cousin and Gary’s son, Corey Turner. Corey’s brother, Josh Turner, is also an employee.

“My only full-time job has been at Johnston’s, so I don’t know anything else but working with family,” says Melissa, who worked under Gary for more than 15 years.

Melissa says that “selfishly,” one benefit of working with family is that it’s easy to coordinate child pick-ups, doctor appointments, and other family matters with Murph.

“For my husband and me, having offices on the opposite end of the building has worked rather well,” says Melissa. “There are honestly full days when we may not even see each other or communicate except via a text or two.”

In the years Melissa has worked at Johnston’s, the business has grown from eight to 21 employees. She says this slow growth has allowed a feeling of family to spread across the entire employee base.

“While there are only four of us who are blood-related, we still treat each other with the same respect and concern that we would if we were all related,” Melissa says. “We do everything from picking each other up from car maintenance appointments to crying on each other’s shoulders when we’ve had a personal crisis. We spend more waking time with each other in a week than we often do with our own families. That culture has been evident since the day I started, and it’s a clear contributor to the success of our operation.”

Morgan Pingel, her mother, Charlotte Smarr, and her sister, Riley Smarr, co-own Fringe Boutique and have a long history as co-workers. Both sisters worked for their parents’ business, Ri-Mor Topsoil and Mulch, as high school and college students. This past May, Charlotte and Morgan celebrated 10 years of working together.

As they began adulthood, the girls wanted to do something different. But maybe not too different.

“Toward the end of college, the idea of Fringe started brewing,” says Morgan. “We worked on both Ri-Mor and Fringe for about a year, then in April, we focused on Fringe.

“People think that we’re crazy for working with one another,” she adds, “but we wouldn’t have it any other way. The three of us work together well. We’ve been close our entire lives.”

Morgan credits trust as the key to their family business success.

“None of us would ever think twice about leaving the store in one of the other’s hands for a day or two, because we know that we all have the same values,” she says. “It’s nice to know that we’re always treating the store like it’s our own, because it is our own!”

Knowing how to handle one another throughout various situations is crucial to the ladies, “because owning a business isn’t all glamorous and fun,” Morgan says. “One piece of advice I’d give to anyone considering opening up a family-owned business, or really any sort of business, is to look at the strengths and weaknesses of everyone on your team. I know that Riley is better at organizing and merchandising things than I am, and that our mom has a lot of business background that we can learn from. We utilize our strengths and let the other two compensate for our weaknesses.”

When husband-and-wife team Chase and Ashley Patton moved to Kansas City in 2009, he attended the UMKC School of Dentistry and she attended UMKC for dental hygiene. They should have guessed their future career paths might someday collide.

When Chase joined Dr. Kent Willett’s practice in 2012, the couple moved back to their hometown of Columbia and had their son, Landry, shortly after. After spending some time as a stay-at-home mom, Ashley joined the practice to work on the website, handle patient correspondence, and occasionally work as a hygienist in the office.

“I love when Ashley is in the office, because despite not working directly together, it’s nice to see her throughout the day,” says Chase. “Having your best friend in the office is always a good thing!”

The only pitfall Chase can imagine is something he also describes as a potential benefit.

“In some ways, it would be nice to be in different professions where we brought home unique experiences to share,” Chase says. “But it’s nice to be able to talk about things that happen at work and have Ashley be familiar with what I’m talking about.”

Chase’s advice to anyone considering working with a spouse is to “always try to keep your priorities straight. In the grand scheme of things, your marriage or relationship is far more important than being productive or having a successful business,” he says. “Also, try to keep work at work and home at home. There will inevitably be some crossover, but we try to keep it to a minimum.”

The Best of the Rest

“No one will have your back like family. You know their quirks and behaviors so well. You know how they will respond in any given situation. Sharing all of your daily ups and downs with someone so close to you is wonderful. I highly recommend it!”

“My daughter, Stella, and I truly are the definition of best friends, which is why I believe it works so well for us. We take strong pride in maintaining My Sister’s Circus. It’s been a locally owned family business for 40 years, and each outfit that walks out of our store represents us. Even after working all day together, we call each other several times at night. We’re like, what could there possibly be left to talk about?”

“Family is one of our highest values, and we’re all very close. It’s a joy to work with the ones you love. And who can you trust and depend on more than family?”

“Finding quality employees is always difficult. With a family member, you have a good idea of their qualities as well as their qualifications. Actually, family members are your better employees: They have the best interest of the business at heart.”

“I love working with my mom, even when we make each other crazy. I’m an only child and she was a single mom, so we had an incredibly close relationship — but spending 100 hours a week together trying to achieve world pie domination takes it to an entirely new level! It truly is a gift to know her in such a new way.”