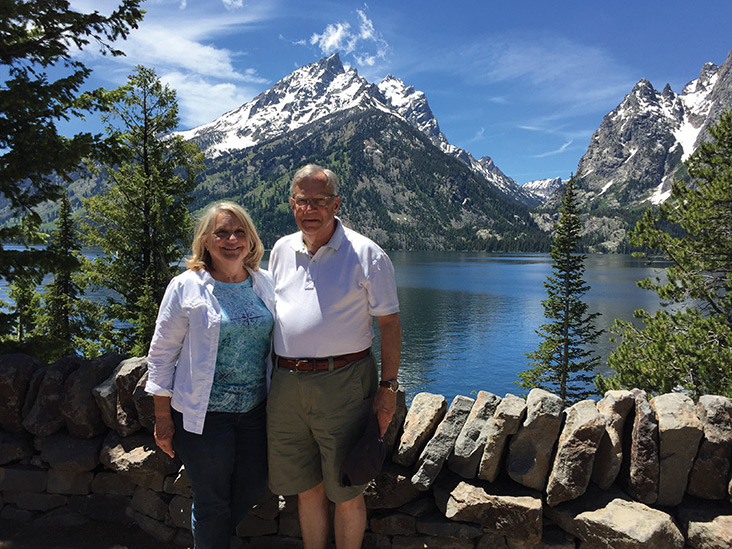 David and Lee share about their favorite Columbia activities, family gatherings, and how they got a second chance at love.

How did you meet?

David: A mutual friend was convinced we should meet. Having both lost spouses to illness after many years together, Lee and I were each just convinced that we weren’t interested in dating. Twice we turned down our friend’s invitation before finally agreeing to have dinner at Sophia’s, Booth No. 11. Our matchmaker left after an hour. Mission accomplished.

What was your first date?

Lee: An old-fashioned dinner date at Bleu where we discussed our love of history. Amazingly enough, we found we had both read Joseph Mitchell and Edward Creasy’s book “Twenty Decisive Battles of the World.”  Now that book sits in a place of honor in our library. I know, crazy.

David: We talked so much — about favorite movies and books and our prior experiences around the world — that I for one was exhausted when it was over. We’re still talking.

What is your favorite art or culture activity in Columbia?

David: Jazz at Murry’s, Art in the Park, and an occasional performance sponsored by the University Concert Series. I like to poke around Columbia’s many art galleries. Both of us enjoy attending sporting events in Columbia, St. Louis, and Auburn.

What is one thing people don’t know about your spouse?

David: The public knows Lee as a member of the local Planning and Zoning Commission, President of True North’s board of directors, and the former CEO of the Columbia Board of Realtors. What the public doesn’t know is that Lee likes to iron our pillowcases. Go figure!

Lee: David doesn’t retire well. First he retired from the U.S. Army, then from the UM System, then from serving as Missouri’s commissioner for higher education. Now he’s back in his old role as chief of staff for the UM System. You would think he was a real serious dude. But David’s sense of humor is boundless and varied — practical jokes just come out of the blue.

How would you describe your relationship in one word?

David: Joyful! We feel fortunate to have found each other late in life. We are true partners and appreciate the opportunities that life provides every day.

Tell us about your family.

David: We have six sons and eleven grandchildren scattered from coast to coast. We gathered the whole family together in 2015 for a Fourth of July week in a beach house at Wild Dunes, South Carolina. It was like Barnum & Bailey’s Circus came to town. It was a hoot.

What does the future hold for the two of you?

David: This fall’s game between MU and Auburn should be tense. (Lee’s an Auburn alumna, ya know!) More travel, morning coffee while watching the fog burn off the nearby lake, sports, great conversations, and watching our children and grandkids grow and prosper.

Lee: Time together, traveling, hiking, talking about everything, watching sunrises, sunsets, snowfalls and thunderstorms. I love this man.

What are the best aspects of your partner?

David: She is sensitive, smart, a terrific mother, and highly organized. She wields a mean clipboard.

Lee: His integrity, humor, intelligence, and humor. He’s giving, loving, and did I mention humorous?