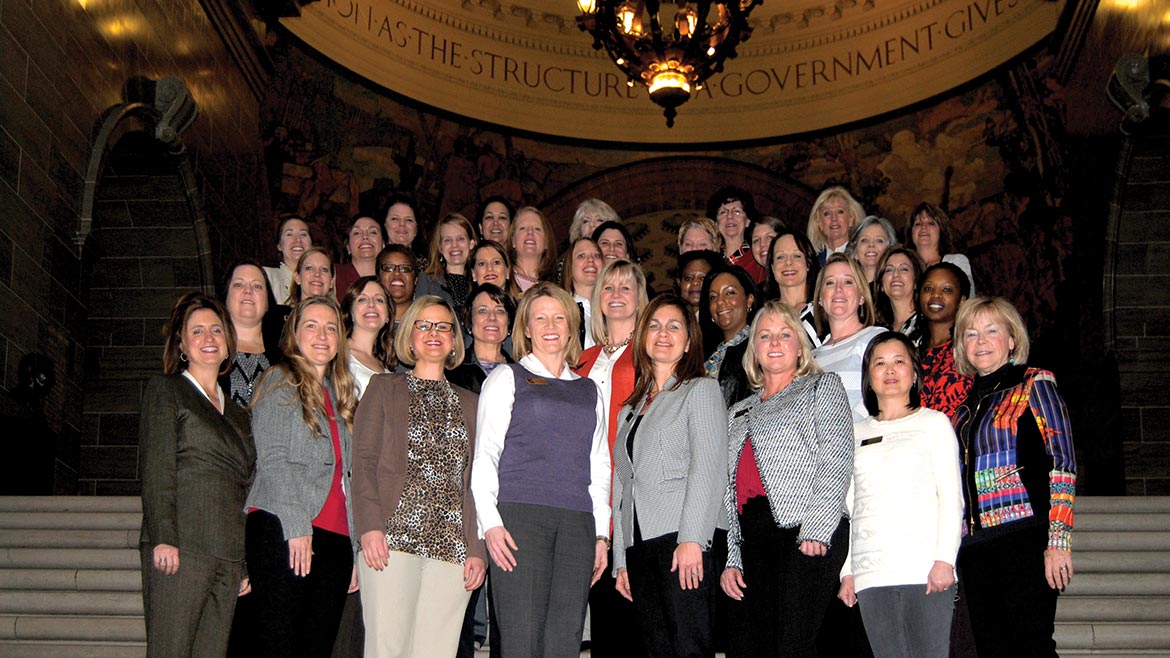 School Board Candidates Explain Vision Ahead of Election

It only took one session of the Greater Missouri Leadership Challenge for Jen Bradley to get hooked.

The GMLC is an annual traveling symposium that gathers women in leadership roles from across the state to learn about and discuss critical issues facing their communities, state, and nation.

Bradley, who was a “challenger,” as participants are known, in 2009, says the Jefferson City and Columbia session was the most impactful for her. The trip included a visit to the state prison.

“I think we all had ideas in our head of what it was going to be like to go to the prison,” says Bradley, who’s vice president and regional retail sales manager at Commerce Bank. “The stereotype we went in with was not what we left with, so I think it’s important for women — for everybody, truthfully — to get outside of what they know and see what other things are out there because that’s truly when you’re going to be able to affect a change.”

Bradley’s experience — finding a new perspective and motivation — is the essence of the GMLC mission.

When former Texas governor Ann Richards couldn’t find enough women to fill her cabinet positions in 1982, she helped start the leadership training program on which GMLC is modeled. In 1989, some women who were graduates of Richards’ program, called Leadership Texas, were transferred to the St. Louis area. When they were unable to find a similar statewide program, they decided to start their own.

The first session for the class of 2017, which took place in March, kicked off the 28th year of GMLC women developing leadership skills and forging relationships with one another. The 2017 class includes 38 challengers from a broad scope of professions: there’s an executive director for a large nonprofit, the dean of a state university, a public school educator, and a chief financial officer — to name just a few.

GMLC takes place in four distinctive geographic areas of the state, each focused on issues relevant to that area. The first session, held in Columbia and Jefferson City, revolves around governmental and political process and education. The second session, in Kansas City, explores urban issues, diversity, and race relations. Women learn about rural development in Kirksville during the third session, and the challengers end their GMLC year in St. Louis for their fourth session, which focuses on global perspectives and technology.

Michelle Zvanut, vice president of human resources at Boone Hospital and GMLC class of 2015, says it was fascinating to see women from St. Louis and Kansas City go to Kirksville because they didn’t believe they would have much in common with the women in the rural town.

“Instead, we spent days with these women and realized these are the same challenges we’re thinking about: how to improve society, how do we make things the best for our families, our children,” Zvanut says.

According to the organization’s website, a Greater Missouri Woman “is intellectually curious, interacts well with others, and while passionate in her beliefs, is open-minded when confronted with new points of view.”

Jan Grossmann, in her fifth year as executive director of GMLC (offices are headquartered in Columbia), says the information from each session, though tailored to that city, can be applied statewide. For example, the women learn about nonprofit organizations while in Kansas City, and “Even though they’re learning about it in Kansas City,” Grossmann says, “they can go back to whatever town they’re from in Missouri and try to help out with a women’s shelter, for example, if that was something that was close to their heart.”

GMLC wants to instill the motivation for women to do just that — take action in their own communities using the knowledge they acquired through the program.

Bradley says she hopes people find an issue or topic they are passionate about during the program and figure out how to advocate for it once the program is over.

For some, this means serving on a local board or commission, or volunteering with a local nonprofit. For Bradley, it means giving back to GMLC by helping coordinate the same session that got her hooked on the organization seven years ago.

Bradley enjoys planning the Columbia and Jefferson City session because it’s rewarding to set the stage for what is going to happen the rest of the year, she says.

As session co-chair, Bradley is also able to go through the session every year with the new classes of women. She loves to see women come out of the prison — a particularly defining moment for her when she went through the program — with a transformed mindset. “It’s a humbling experience to watch them go in with the apprehension and then, when they come out, they’re completely different,” Bradley says. “To me, that was kind of where my passion was at — to see the lightbulb going off.”

Grossmann likes to see alumnae, like Bradley, lead new groups. “Many of them can then relay their experiences to the current class about what changed in their lives after they went through the program, what session really was most influential in their life and how it impacted them and what they do now because of that.”

Zvanut says she went home from the Kansas City session knowing that she needed to do more for the community. “It opened my eyes to ways that women could impact people who have a lot less means for themselves,” she says. “I just saw some individuals who had taken a passion of their own and formatted that into a way of making a difference in other peoples’ lives.”

A defining benefit of GMLC is the large, strong network of professional women that continues to grow with each graduating class. In a way, the organization functions because of its alumnae: Women go through the program, have an outstanding and meaningful experience, and then go on to support the organization through leadership roles, program planning, and nominating other women for GMLC.

While planning the programming for this year’s central Missouri session, Bradley was inspired to action, yet again, by GMLC. One of the topics for this year is “Bullying in Today’s Society”; as a mother of three boys, Bradley decided she’d like to run for school board so she can be an advocate for her sons. “I’ve got to do something where I’m at,” she says.

Zvanut says she’s not someone that likes to promote programs unless she really believes in them. GMLC is one she really believes in. “It is one of the strongest group of people all gathered in one place that I’ve ever been exposed to,” she says. “It was not like any experience I’ve gone through. I would encourage people to take advantage if they have the opportunity.”