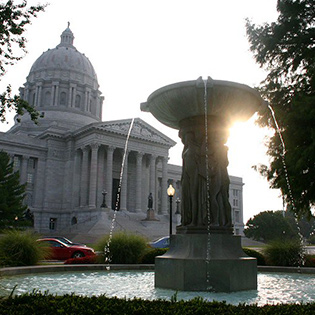 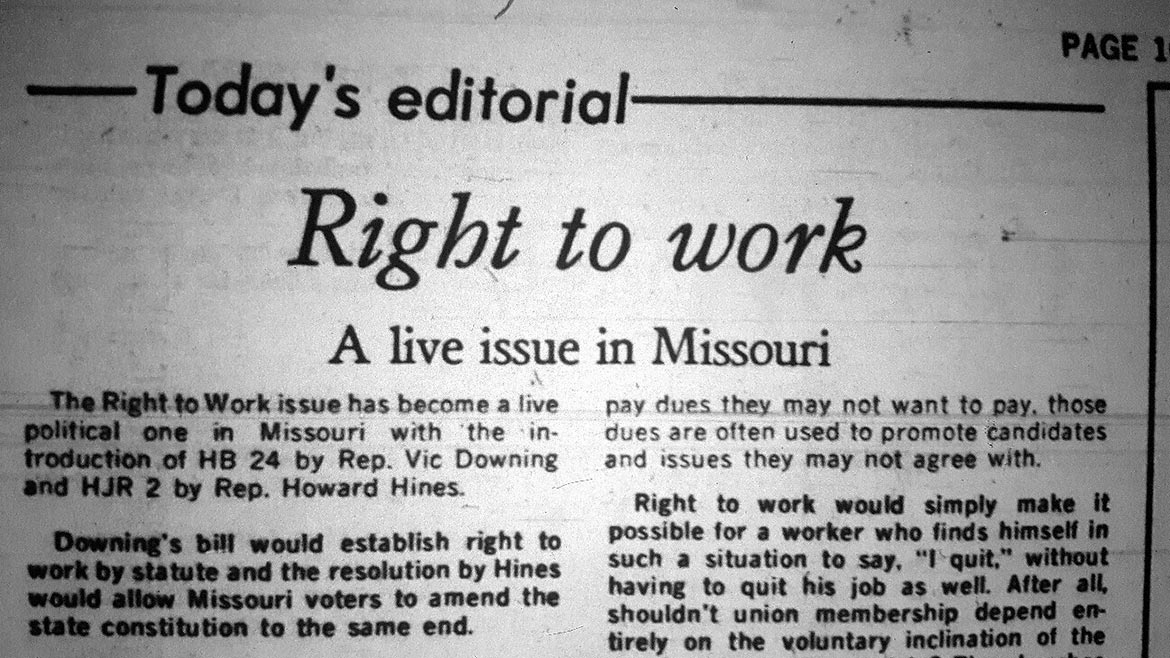 Transitioning into a new year is always a time of economic stress while considering budgets, taxation, income and expense, profit and loss, and the realities of life in general. The holidays weren’t so full of cheer for some retailers as notes are taken about store closings and the surge in online sales while sales tax revenues continue to spiral downward.
Stir this with the surprising upset in administrations at both state and federal levels and there’s the recipe for uneasiness about the future in many sectors. Cash-strapped entities on all levels, which have delighted for years at the manna from sales tax receipts, will have to get creative from now on because it will be a cold day in Hades before online sales — unless the business has a physical presence in a given state — are ever taxed.
Then there’s this: a so-called “right to work” law for Missouri.
Republicans and the new GOP governor Eric Greitens, with veto-proof majorities in both houses of the legislature, are marching full speed — maybe by the time you read this — to pass a right to work law designed to invoke Section 14(b) of the Labor Management Relations Act of 1947, better known as the Taft-Hartley Act, that went into effect over President Truman’s veto on June 23, 1947.
Section 14(b) always shocks organized labor because in states where it is the law, Section 14(b) outlaws closed-shop labor agreements that were first legally recognized by the National Labor Relations Act of 1935 (Wagner Act) ordering employers to collectively bargain with a union and its members and requiring employees to join and pay dues to the union regardless of their personal inclination. The Taft-Hartley law was the legislative reaction to months of labor strife after World War II, marked by crippling strikes in industry, transportation, and raw material production that brought the country to its economic knees through much of 1946. The GOP took control of the House and Senate after the November 5 general election, and Representative Fred Hartley (R-N.J.) and Senator Robert Taft (R-Ohio) led the charge for this eponymous bill.
Illinois is alone among Missouri’s eight contiguous states in not having the 14(b) exemption, and, with passage anticipated here, Illinois will be surrounded. Right to work laws are now found in 27 states, with Michigan, Iowa, Indiana, and Wisconsin the most recent additions to the club. Right to work law proponents believe that Missouri will benefit after it joins this club because the 14(b) exemption will enhance our attractiveness for economic development and job creation while providing for a sturdier, more reliable tax base. We’ll see.
Many of us believe the state’s economic problems are more deep-seated. While the 14(b) exemption may prove to be the magical elixir that will stabilize and secure various enterprises that are already here, we should caution ourselves that there won’t be that many companies housed in other states that are ready to take a powder from where they are now and come to us because Missouri can offer the purported benefits of right to work law. Taxes, climate, workforce availability, education, including vocational training, and accessibility to markets are of greater importance in determining corporate relocations. Then there’s transportation and infrastructure.
Potential employers need to be assured that Missouri is ready to tackle infrastructure issues. That means, for starters, getting serious about highway and transportation funding.
What is so difficult, so diffuse, so arcane about increasing motor fuel taxes? Are we so weak that the legislature and voters fall for the strident propaganda gushing from a cabal of gas station owners and operators who bleat their hatred against keeping the highway network in shape? Of course this directly benefits them. Time to move Missouri to the front of the transportation line; want to bet the legislature will do nothing this session to get us out of this mess relative to roads and bridges?
Missouri now has its arms full with greater fiscal challenges than we’ve seen for a while in an otherwise fiscally prudent, no-deficit, balanced-budget state. Aren’t we glad we don’t live in Illinois with all of its problems?