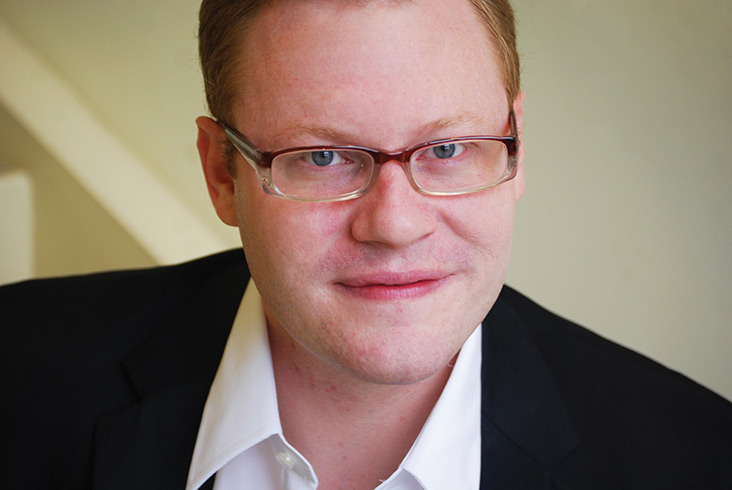 Bringing the art of theater to mid-Missouri.

When the lights dim down over the Lyceum Theater’s auditorium, the audience shifts their focus into another world. Together they laugh, they gasp, and they cry as a story unfolds between actors on the stage. Each detail that helps tell each story would not be possible without every member of Lyceum Theater working behind the scenes. Quin Gresham, who is the producing artistic director for the theater, located in Arrow Rock, is lucky enough to see both sides of theater when a production happens.

“It is exciting and equally gratifying to sit in the back of the theater when the show opens,” Quin says. “I get to see what all the hard work we’ve done does emotionally to an audience. It’s a special thing because we are all sitting in a dark room with different ideas, but we come together to enjoy theater.”

Quin has worked in theater for about 20 years, but, to him, the time has felt like nothing at all. He began his career back in the summer of 1996. At the time, Quin attended the Conservatory Theater of Arts program at Webster University, where director Marla Woodruff helped him realize and pursue his passion for directing.

“She is an incredible human being, teacher, and the first person to give me a taste of what I was eventually going to do with my life,” Quin says. “If I didn’t meet her, I wouldn’t be doing what I am doing today.”

Early on, Woodruff reached out to Quin by giving him opportunities to lead smaller productions outside of his writing and directing classes. His goal was to eventually work his way up to a role in theater management. Little did he know, this opportunity would arrive sooner than expected.

“Before I got into Lyceum Theater, I was asked by my friends over coffee to be its associate director,” Quin says. “And I was eager to take that position, since it would give me more arts management experience and was where I wanted to go in my career.”

Shortly after Quin started with Lyceum, Philip Coffield, the theater’s longtime associate artistic director, fell ill and asked Quin if he would take his place. 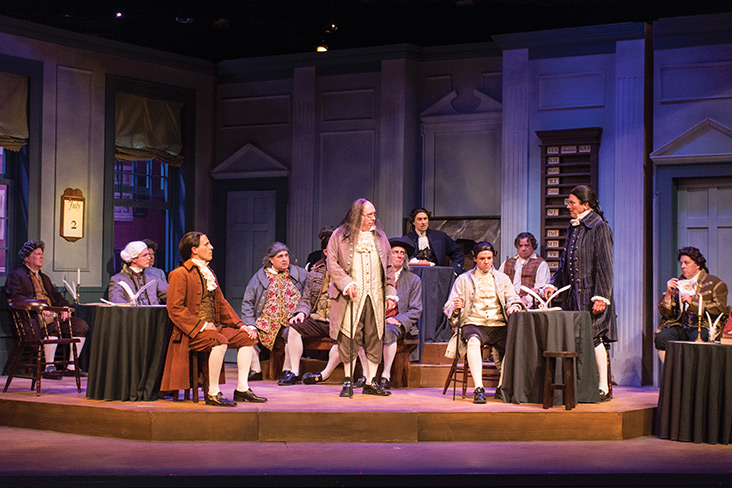 From the Lyceum’s performance of “1776,” which Gresham directed.

“He really wanted me to stay with the theater,” Quin says.  “After Phil retired, we would talk on the phone and he would give me a crash course in theater management. It was heartbreaking to see him go, but he was and continues to be a big inspiration of mine today.”

Today, and especially during theater season, Quin can always be found doing something for the theater. Depending on the time of year, this could mean anything from dashing around the Lyceum’s property to checking in on the tiny details of a production, or handpicking and contracting actors and actresses in New York.

How does this theater draw audiences and Broadway actors  to a tiny town in the middle of Missouri? Arrow Rock currently holds a population of 56, according to the road signs Quin sees when driving into work. It’s a rustic town preserved in the heart of the Midwest and quite a distance from some of Missouri’s larger cities. Yet the town and theater draw people in from near and far. Quin says it’s all in the magic of theater and the town.

“The surroundings of the theater are unmatched in historical accuracy,” Quin says. “It is a well maintained town and it makes people feel like they’ve travelled back to the 19th century.”

Of course, a theater would be nothing without its cast of actors, actresses, stage assistants, art directors, designers, and others present to prepare for a production. The cohesiveness of this Lyceum unit would not be possible without the oversight of Quin. No day is ever the same for him, but Quin will do whatever it takes to make a show go on, which sometimes means stepping in to act or direct a production.  He does whatever he can to help the staff of Lyceum.

“You don’t always know how much offstage work it takes to make a production successful,” Quin says. “It isn’t always the person on stage, or the sound person, but sometimes it is the person who makes sure people show up on time or travel safely, or who pays the bills on time. Everyone who brings these productions, this theater, to life — they work hard.”

At the end of the day, the moment Quin enjoys most is when he is able to sit back at the beginning of a performance and watch as the theater darkens, the stage brightens, and one of Lyceum’s productions comes to life. He says it’s a magical moment to see these audience members, no matter their differences, come together to enjoy one story at a mid-Missouri theatre. 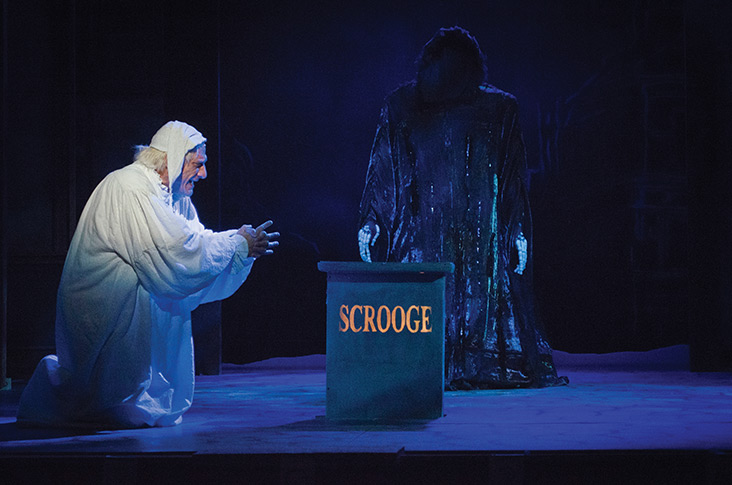 From the Lyceum’s “A Christmas Carol.”

9:00 a.m.— Quin arrives at the office. He checks emails and voicemails that might have crept in overnight.

9:30 a.m.— Quin meets with administrative staff to discuss finances, how the box office is doing for the week, and any scheduled marketing materials, and they brainstorm new methods to reach their audience. These meetings vary from day to day.

11:00 a.m.— Quin makes the rounds through the production departments: scenics, costumes, electrics, sound, and props. He and the department heads discuss what special circumstances are at hand and check their progress for the next show opening.

1:00 p.m.— Quin visits the rehearsal hall, perhaps to watch a run-through of the upcoming production. This will be followed by a notes session with the director (if he’s not the director) to discuss areas of the production that Quin thinks need to be made more clear for the audience.

3:00 p.m.— Production meeting. These meetings vary in length and in scope, but the production stage manager delivers notes to the various production departments and they discuss strategies and solutions.

5:00 p.m.— Quin returns to the office to catch up on all the emails and voicemails that he’s missed while running around Arrow Rock.

7:00 p.m.— Quin checks in with production departments before the house opens for an 8 p.m. show. He visits the dressing rooms to chat with the actors before they head onstage for the evening.

7:30 p.m.— Quin welcomes their patrons to the show. The administrative staff and board members are a constant presence at all performances.

10:30 p.m.— Quin heads home and gets the coffee pot ready for the next morning.