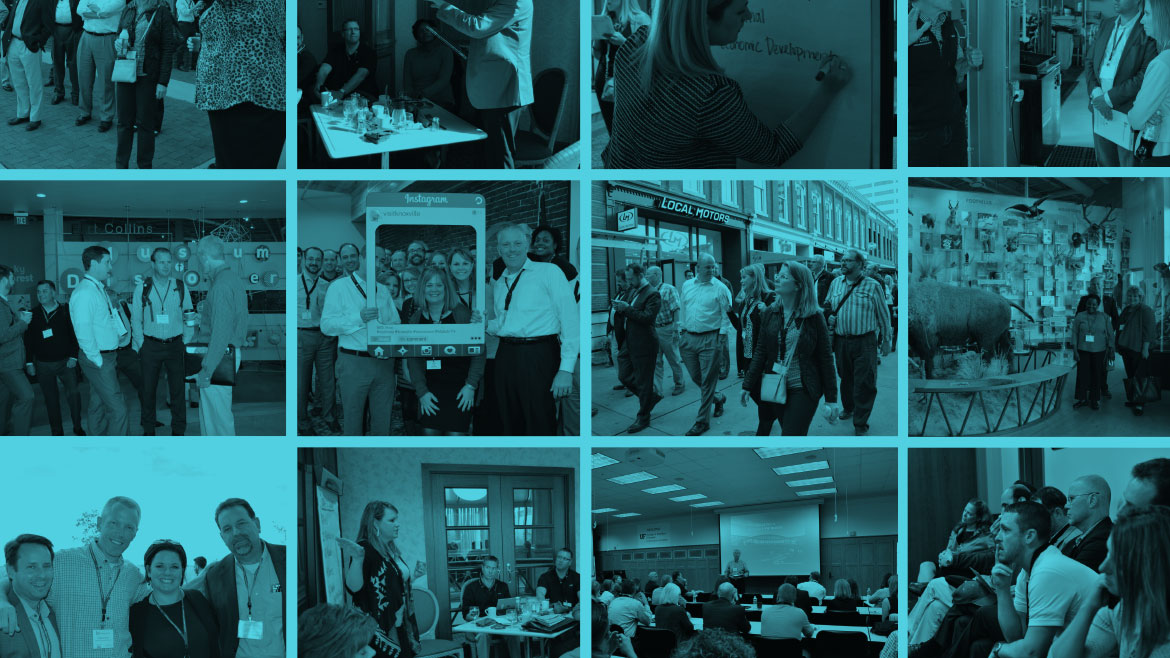 On the surface, you might not think that three cities in such geographically diverse states as Tennessee, Florida, and Colorado would have much in common with each other, let alone with Columbia. But dig a little deeper and you’ll find that these four cities — Knoxville, Gainesville, Fort Collins, and Columbia — share similar community makeup, values, goals for community growth, and challenges in meeting those goals.

In 2013, the Columbia Chamber of Commerce explored the idea of convening leadership visits to cities like Columbia that could provide a model for what Columbia education, commerce, tourism, and transportation could aspire to in coming years. The chamber came away with a model after visiting Lexington, Kentucky, whose chamber first championed such a program 77 years ago.

The chamber then launched a pilot leadership visit program, taking its delegation of chamber members from all facets of education, business, city government, civil services, and the nonprofit sector on three-day October visits to Knoxville in 2014, Gainesville in 2015, and Fort Collins in 2016.

“Our board of directors decided this would be a value-added program and would position the chamber as a convener for idea-sharing among various entities,” says Jolyn Sattizahn, vice president of community affairs for the chamber, who coordinates the trips. “The board initially gave us a three-year trial of the program. [2016] was our third year, and they recently approved to make it a permanent program in our scope of work. It’s good to see we’re headed in the right direction.”

Sattizahn says the trips, which are open to all chamber members, are about getting the right mix of community leaders together who might not normally collaborate in addressing local issues. “Our goal is to have a diverse mix of decision-makers at the table who can take action on some of the items learned,” says Sattizahn.

With the 2016 Fort Collins trip taking a delegation of 58, attendance on the trips has grown each year, as has their popularity for helping leaders network, collaborate, and strategize together.

With three leadership visits under their belts, these well-traveled community leaders are now ready to take what they’ve learned from the model cities and put their ideas into motion to benefit Columbia.

For Amy Schneider, director of the Columbia Convention and Visitors Bureau, attending all three trips with an eye on tourism has been eye-opening.

“I make it a priority to attend this trip because of the relationships that are formed, and because I get to see a [different] community from my perspective,” Schneider says.

She toured a hotel and conference center located directly on the University of Tennessee campus during the Knoxville trip, and she saw the positive results of public-private partnership on tourism in Fort Collins. 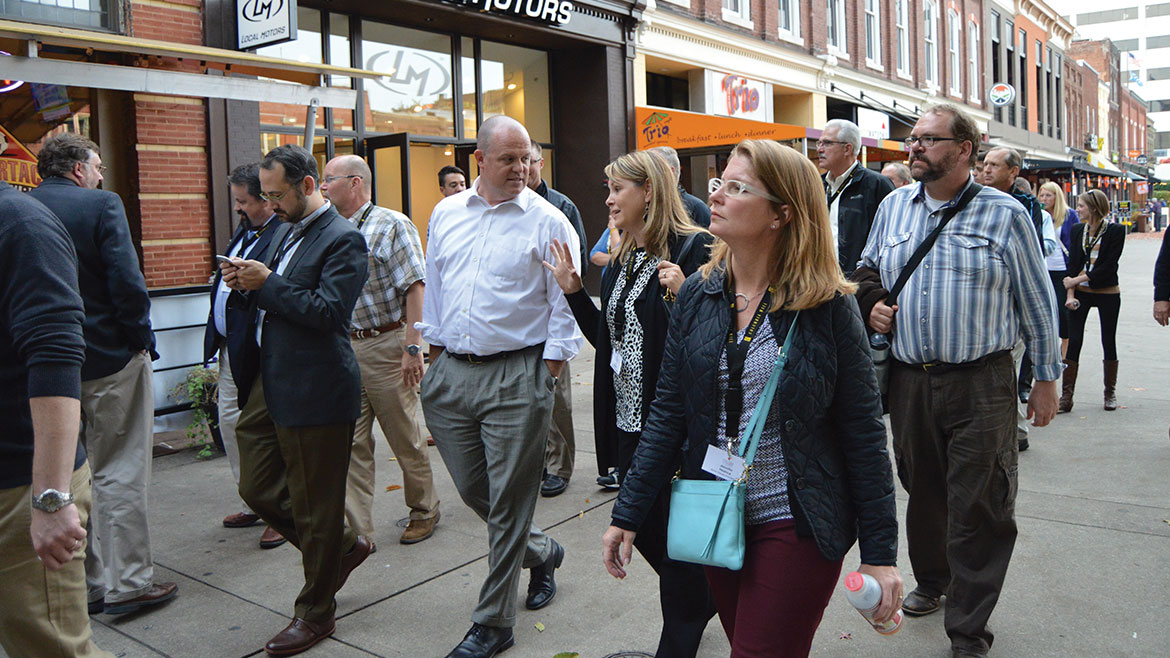 Schneider, along with the rest of the delegation, toured the Fort Collins Museum of Discovery, a science and culture museum partly run by the city, as a successful example of public-private collaboration. Voters passed a tax package in 2005 to help fund the museum.

Schneider also noticed that where Columbia tourism attracts people to stay and play in Columbia for the duration of their trip, Fort Collins takes a different approach.

“Fort Collins focuses on having people spend the night in Fort Collins and then sends them to other communities to do whitewater rafting and hiking,” she says. “They have a very vibrant downtown. They have lots for people to do during the nighttime, and then they send them out during the day.”

The Fort Collins experience also gave her a  greater appreciation for Columbia’s Department of Parks and Recreation, which she says boasts a more collaborative partnership with the CVB than their Fort Collins counterparts.

“I came away appreciating our parks and recreation department so much more because they work so well with the Convention and Visitors Bureau,” she says. “I knew we had a great relationship, but this confirmed it.”

Schneider also thinks a larger regional airport, like the ones that allowed the delegation to fly directly into Knoxville and Gainesville, is good for tourism, including medical tourism. In August 2016, Mayor Brian Treece introduced a task force on medical tourism to determine Columbia’s capacity to be a health care destination, offering an opportunity for competing health providers to collaborate in boosting Columbia’s economy.

“At the university’s research reactor, they are making these breakthrough isotopes [for treatments], and they’re flying them out every day,” she says. “Wouldn’t it be great if we could fly people in instead?”

Transportation is an issue for which Columbia consistently seeks innovative strategies, including public bus transit and, most recently, expanding Columbia Regional Airport. Eric Morrison, senior vice president and Columbia market president of Providence Bank, went on all three leadership visits and was inspired by the transportation solutions each city had created.

Morrison shares Schneider’s sentiments that a larger regional airport could help the city grow. He says that while the Knoxville regional airport was well-developed, the more modest Gainesville counterpart offered a better model for Columbia and spurred the conversation to expand Columbia’s airport with the addition of a new terminal.

“We started to have some discussion about what it looks like to get a new terminal going,” says Morrison. “What are the finances behind it? What can we realistically do?” 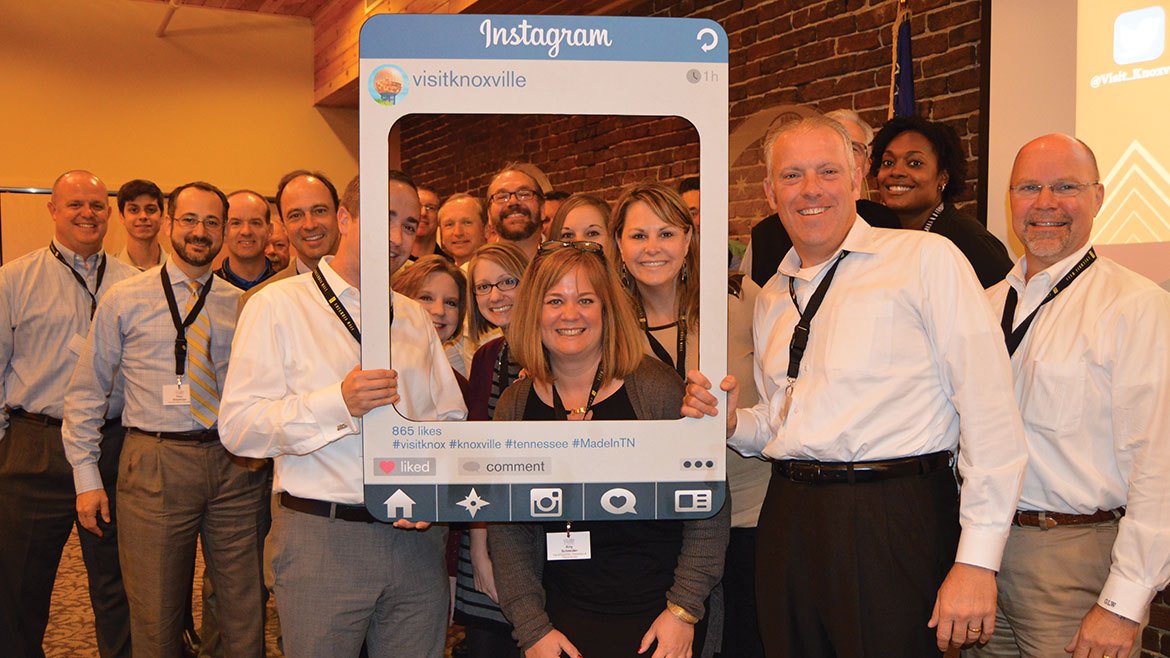 In August, Columbia voters passed a one percent increase in the hotel tax, from four to five percent, to help fund improvements to the regional airport, including an additional terminal, which is in the planning stages.

“It’s mass transit on rubber wheels. It’s like a subway, but it’s a bus,” explains Morrison. “It has 12 stops on a dedicated lane, and it moves an incredible amount of people. It’s been very successful.”

Morrison also thought that Fort Collins’ statewide leadership efforts to improve Interstate 25, a major artery for tourism and commerce, could provide an innovative model for Columbia to take on necessary upgrades to I-70. The Fix North I-25 Business Alliance is an advocacy group of various businesses and industries that raises funds to improve I-25 rather than relying on state or federal appropriations.

“Fort Collins took the lead statewide on getting appropriations for making upgrades to I-25,” says Morrison. “There is no viable fix for I-70, but there’s a model for us to follow.”

For Toni Messina, civic relations officer for the City of Columbia, Fort Collins was her first leadership visit. She attended a community policing and crime panel led by Fort Collins Police Lt. Jeremy Yonce. Fort Collins has a large police force, around half of which is dedicated to community outreach; the city’s crime rate hit an all time low in 2015.

“It appears that, because FCPD has more staff and perhaps more resources, they’re able to allow more of their officers to have outreach time, as opposed to what we do locally: six officers assigned to neighborhoods and the rest regularly responding to calls,” says Messina.

Messina notes that while the Columbia Outreach Unit is considerably smaller than Fort Collins’, the work of those six officers is effective and important.

Like in Columbia, FCPD has community events where officers go into neighborhoods to better connect with the residents they serve. And just as CPD partners with university police to help patrol campus, FCPD and Colorado State University police also collaborate.

FCPD also stands out as the first force in Colorado to make body cameras mandatory and utilizes Nextdoor, a neighborhood-based social networking app, to connect police districts and to help inform residents of suspicious activity. Yonce noted that morale on the force is high.

Messina says she gained a lot from the trip beyond what she learned about the Fort Collins police department. For her, it was also about networking and finding new ways to be engaged in her community back home in Columbia.

Bringing it back home

About a month after the October 2016 trip to Fort Collins, 27 members of the delegation reconvened to discuss their top takeaways and to strategize an action plan to be implemented by community members. There was much to discuss, too, as K-12 education, affordable housing, and the university’s role in the city’s marketplace were highlighted on all three leadership visits as well.

The group agreed on several key takeaways from the Fort Collins trip that they hope to advance as a group of now well-connected community members. Among those takeaways are considering an interstate improvement alliance; assessing the ability to apply Fort Collins mass transit principles to Columbia; and creating a standing “futures committee” whose task is to anticipate Columbia’s needs 15 to 30 years down the road. And they look forward to the October 2017 trip, whose destination will be announced in January. 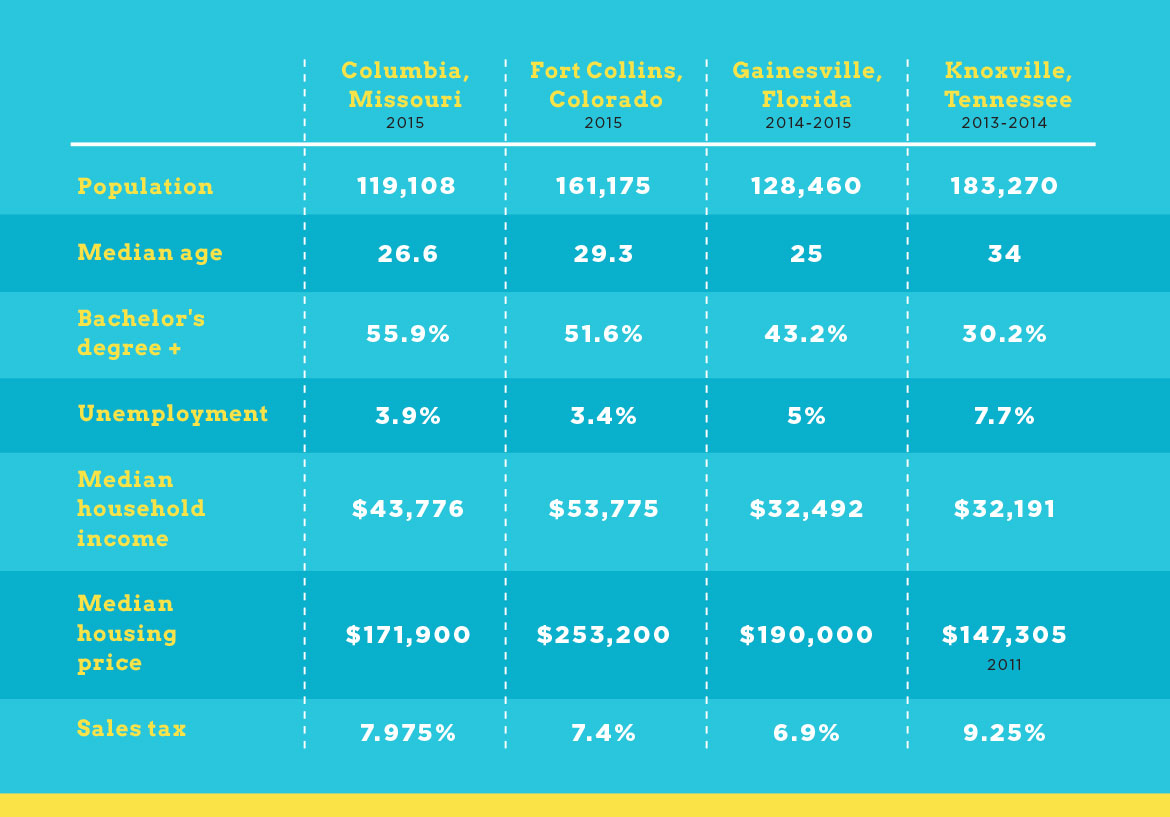 “There’s a huge amount of professional and personal trust that comes out of these visits,” says Morrison. “So when we go to follow up on these things, it’s not 30 strangers in a room — it’s people who you know much better and have a little more appreciation for. It lends itself to much more collaborative decision making.”

Schneider agrees with Morrison that the value of the leadership visits goes far beyond what is learned on those three short days away from Columbia.

“Each trip has brought community members together, and I think that’s a really important part that can’t be overlooked,” says Schneider. “All of these people from different sectors come together, and they realize that everybody has the same goal, and that’s to make Columbia the best place to live, work, and play.”