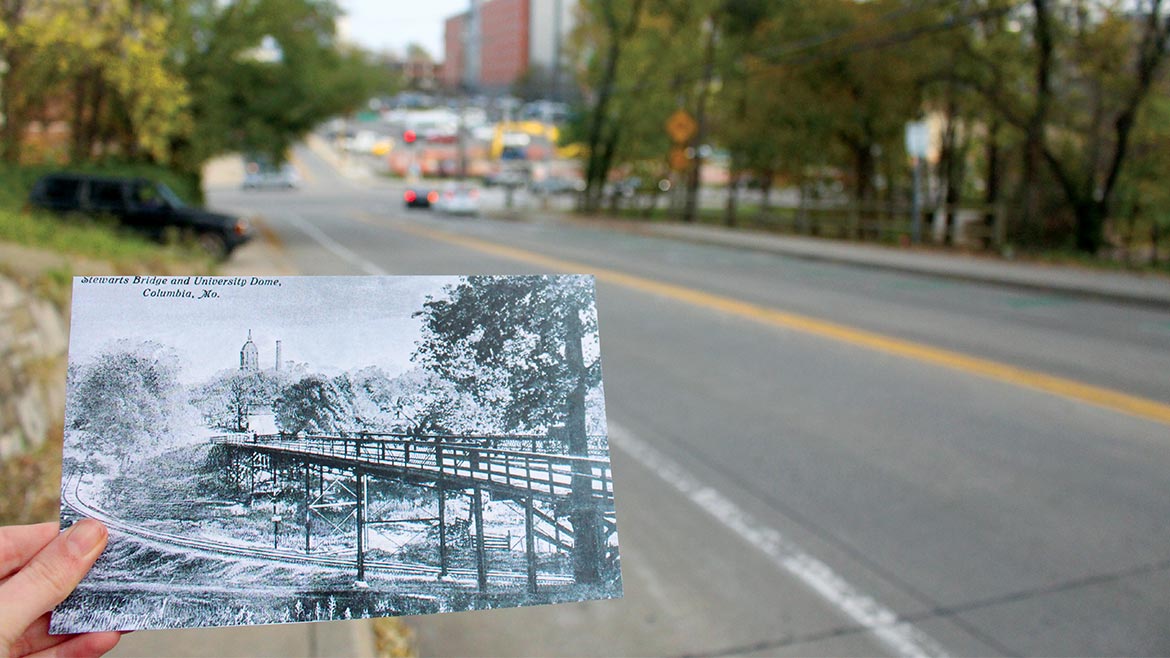 The Stewart Road Bridge was built in 1920. The bridge, at the time called Stewart Bridge, crossed Flat Branch Creek and the MKT Railroad. During a time when racial segregation was prominent in Columbia, the steel and concrete structure connected a white, middle-class neighborhood that could use electricity, gas, and water to the MU campus, just beyond the southernmost part of Columbia’s black community that often did not have those commodities.

In 1923, a white 14-year-old named Regina Almstedt, daughter of MU German professor Hermann Almstedt, was assaulted by an African American man near Stewart Bridge. Regina Almstedt identified James Scott, a janitor at the MU School of Medicine and a respected member of the city’s black community, as her attacker. Despite details from her testimony that didn’t support Scott’s guilt, he was still charged with rape.

While Scott was in jail, a mob consisting of over a thousand university students and Columbia residents broke into the jail and took Scott from his cell. They then proceeded to drag him to the site of the alleged crime. Despite the objections of Hermann Almstedt and the case’s prosecuting attorney, and despite Scott’s continued pleas of innocence, the mob hanged him. No members of the mob were convicted of the crime.

In the past decade, Scott’s death has received increased attention — so much so that individuals like Scott Wilson, a Columbia filmmaker, and the Boone County medical examiner’s office successfully got state officials to amend the official cause of death on Scott’s death certificate in November 2010. The cause of death is now listed as “asphyxia due to hanging by lynching by assailants,” and the phrase “committed rape” has been changed to read, “never tried or convicted of rape.”

Other groups, such as MU’s Association of Black Graduate and Professional Students, have used Scott’s lynching as a way to highlight race relations in the community today and to commemorate those who suffered discrimination. In Fall 2016, the community memorialized Scott with a historical marker close to the site of the lynching.

Today, Stewart Bridge is gone, along with the railroad tracks that ran underneath it. Where the bridge used to be is now Stewart Road, near the MKT trail entrance and Flat Branch Creek. A culvert underneath the road still harbors some pieces of the concrete bridge supports.