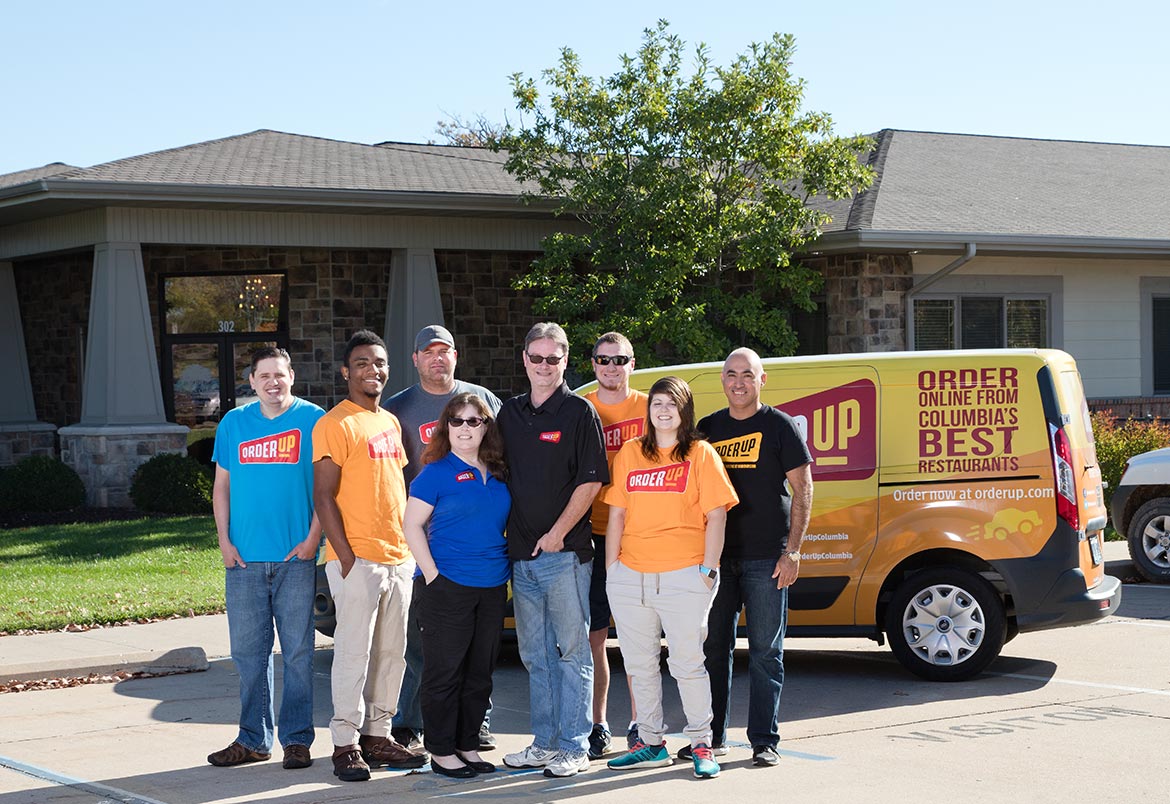 OrderUp brings local Columbia restaurants — both franchised and individually owned — to residential and business doors. Hungry customers looking to stay in for the night can place an order through the OrderUp website or app, and one of nearly 70 Columbia drivers will deliver it within 40 minutes or so.

“We provide a service that a lot of [restaurants] don’t provide themselves in delivery, and if they do provide it themselves, it’s a pretty challenging initiative in itself,” says Jamie Canine, co-owner of OrderUp Columbia.

Open seven days a week with hours varying per restaurant, OrderUp’s dual goal is to make restaurants accessible from home and to ease the delivery process for restaurants. “We think of ourselves as an extension of their company,” Canine says.

Hoss’s Market is one of many local restaurants that participates in OrderUp. Owner Trish Koetting knew Canine and his business partner, Jake Sheafer, through their advertising business, The AddSheet.

Koetting says OrderUp is all about customer service. The company allowed Hoss’s to offer delivery service that they couldn’t offer previously.

“It’s a segment of the market that you normally wouldn’t be capturing — it gives our customer another option for how they can get Hoss’s Market,” she says. If a customer wants to order dinner to their home, they will only be selecting from restaurants that deliver. “If you don’t have a delivery service, you’re not even an option,” Koetting says.

The OrderUp franchise came to Columbia in 2014. Tim and Jill Overton supervise logistics and delivery; Jamie Canine and Jake Sheafer oversee marketing and sales. These local owners have deep Columbia roots and backgrounds owning individual businesses, though this is the first franchise that any of them have owned. Canine and Sheafer own The AddSheet and Marketplace Magazine; Jack FM radio; and Pump-Top Network, a company that plays advertisements at gas pumps.

They decided to combine dining with their digital experience through the OrderUp franchise, which Canine calls a response to the market.

“Any place is a good place for OrderUp,” Canine says. “It’s kind of where the restaurant industry is headed. It’s a service that’s in demand.”

They have three main goals: to add more restaurants they’ll deliver for, to grow their late-night offerings, and to add more tech features (for example, a feature to edit an order after it’s already been submitted is in the works).

Canine says that the franchise aspect of OrderUp has been a learning experience.

“Being able to cater every little detail around customers’ and consumers’ desires” can be challenging when working with a company that seeks regulation and uniformity across the nation, he says. Still, the site has many customizable features, and the Columbia franchise is able to offer giveaways and promo codes for local businesses and residents.

The parent company is headquartered in Baltimore, which is where technology development takes place. The company started with the name LionMenus, serving State College, Pennsylvania, the town where Penn State University is located. The company relocated to Baltimore and expanded in 2009 as LocalUp. The name changed to OrderUp when it began to operate under a franchise model.

A restaurant that partners with OrderUp is a subcontractor, meaning that the customer enters an agreement with OrderUp, pays OrderUp for the food and delivery, and then OrderUp pays participating restaurants at the end of the week.

After an order is placed through the OrderUp website or app, restaurants receive an automated phone call telling them they have an order, and then they can accept the order over the phone. Once accepted, orders are sent via email to the restaurant. Hoss’s Market gets about 40 OrderUp orders per week.

In Columbia, OrderUp partners with 61 local restaurants, including D. Rowe’s, Shakespeare’s, CJ’s, G&D Pizzaria, and Buckingham BBQ. They also partner with national chains, such as Subway and Dairy Queen. Restaurants can choose what portions of their menu they offer on the website. Osaka, the Japanese bistro on Nifong, offers just their dinner menu, for example.

“The local restaurants are who we cater to the most, but, now that we’re proven and have a track record behind us, the national guys are starting to come on board,” Canine says.

Canine says OrderUp started with about 30 restaurants and adds two each month. In November, they added Noodles and Company, increasing their portfolio of national brands. “We want to offer as much variety as we can for the consumer,” he says.

At the national level, OrderUp’s primary clients are college students, but Canine says their client base in Columbia, despite its high collegiate population, is split evenly between permanent residents and students. Young professionals in Columbia often use the app to order lunch at work, and the app can be used to cater large events. Fridays are their most popular group-order days.

Overall, OrderUp averages more than 230 orders per day in Columbia — one of the higher ticket averages in the industry. He says, “I think that speaks to how open to new things and how open to innovation that the general population is.”