It’s Only an Election

Columbia collectors illustrate how easy making your own collection can be.

Columbia’s downtown streets ooze with opportunities to experience local art, and the city calendar overflows with festivals and events showcasing local artists and their work. Simply slip on your walking shoes the first Friday of any month and trek to the North Village Arts District, where galleries, shops, and businesses open their doors for an art crawl featuring live music, art demonstrations, children’s activities, and more. Stop in the Columbia Art League, Artlandish, or Orr Street Studios. It doesn’t take much to connect with the places that sell art, or the people who create it.

But what about those who purchase it? Who are Columbia’s art collectors, and what are they like?

Robin LaBrunerie got her real start in art collecting thanks to a smart, affectionate, instinctive collie mix named Daisy.

Robin and her husband, Alex, began purchasing art 15 years ago and had a dozen or so works in their home before meeting Daisy.

Robin became friends with local art and antique dealers Melissa Williams and Doug Solliday, who own a second story gallery on Ninth Street. Williams and Solliday traveled to the East Coast frequently on business and needed a dog sitter for Doug’s pooch, Daisy. Robin and Alex had small children who were clamoring for a pet. “It was a win-win,” Robin says. “Our family loved Daisy so much that it was hard to accept cash payment for taking care of her.”

Williams’ solution: give Robin credit toward art purchases that she wasn’t in a position to afford on her own.

Robin will never forget building up her “Daisy dollars,” adding a little cash, and purchasing what is still one of her favorite pieces, a townscape by Missouri painter Bernard Peters. “Peters helped found the Ste. Genevieve colony of artists in the mid-20th century,” Robin says, “and the painting has a beautiful use of color and shadow, and a very Midwest feel to me.”

Since those early dog-sitting days, Robin and Alex have added more than 85 pieces to their collection, featuring both vintage art and local, living artists like Russell Green and Pat Gaines.

“My husband and I have always wanted to fill our home with art,” Robin says. “We want to be surrounded by things that feed our soul.”

Nestled on a quiet street near the public library, Robin and Alex’s home features a variety of styles and periods of art. “We are fortunate to have an older home with many rooms and a lot of wall space,” Robin says. “Each room has a different look as far as furnishings, colors, and even eras.”

Robin likes to mix things up, and she has some unexpected combinations of art. She’s also passionate about helping others in Columbia see just how accessible and affordable original art can be. “I want people to know that they can have artwork on their walls that means something,” she says, “that they can purchase interesting, pleasing, stimulating pieces right here in Boone County.”

Radiologist Maxwell Lazinger purchased his first piece of art 12 years ago when he walked into what was then PS Gallery, met co-owner Jennifer Perlow, and fell in love with a painting of a sunset.

“The pigments were mixed with wax, creating a translucent feeling,” Max says. “The painting changed depending on the light in the room. It reminded me of growing up on the Jersey Shore.”

Since then, Max has met his wife, Julie, and the couple has made a habit of attending exhibits at the gallery, now called Sager Braudis and owned by Joel Sager and Scott Braudis. Max and Julie have expanded their collection to over 100 works of art, each adding meaning to their bustling two-story home tucked away on a cul-de-sac in the Thornbrook subdivision.

“Every piece has a story, or a feeling,” says Julie, her eyes circling the entryway and open living spaces on the first floor. “When I look at our home, it tells our story, the story of our life together.”

Much of their collection was purchased from places they love to travel, bought as gifts for each other, or acquired because it evoked a memory of a meaningful time in their lives.

One of their favorite pieces is an expansive, flamboyant acrylic on canvas by Jonas Gerard, a self-styled abstract expressionist from Asheville, North Carolina. The painting holds a prominent place above the mantel in their sitting room.

“We were literally on the way to the airport when we decided to pull in the gallery,” Max shares. “We fell in love with a lithograph of this painting, purchased it, and asked if it would be possible to see the original.”

They learned that the painting had been a gift to the artist’s friend. The friend had died, and the artist had reacquired the painting for his personal collection. The original was located at a gallery nearby.

Max and Julie quickly decided to make one more stop before catching their plane.

“When the curator pulled out the painting, we were awestruck,” Max says. A moment later, the artist came out to meet them. “He was a charming man in his 70s, and we really connected,” Max continues. “It was not the best time to spend the most money you’ve ever spent on a piece of art, but that’s what happened.”

One of Julie’s favorite art stories involves a gold tone of an Edward Curtis photograph that Max bought for her birthday last October. Curtis was a prominent Native American photographer at the turn of the century; Julie had read a book about his life, was fascinated, and shared excerpts with Max during their reading times together.

Max looked into purchasing one of Curtis’ photos and stumbled upon the Christopher Cardozo Galleries in St. Paul, Minnesota. Cardozo, who is widely known as the world’s leading expert on Curtis, had acquired 60 original negatives of his work. Max was able to search the archives and choose one for Julie’s birthday gift.

To make the surprise even more meaningful, Cardozo emailed Max that “One Hundred Masterworks,” an exhibit of Curtis’ photographs, would be on display at the Figge Art Museum in Davenport, Iowa. Max surprised Julie with a day trip, and the experience came full circle when Cardozo unexpectedly sent the companion coffee table book to them in the mail.

Max and Julie are committed to supporting the art community by buying work from local, living artists. They have purchased 38 works of art and 11 pieces of fine jewelry from the Sager Braudis Gallery, and have the largest known single collection of Joel Sager’s personal work. Sager paints landscapes, still life, and portraiture, and before purchasing PS Gallery in 2013, he was the artist-in-residence. His process often involves a distinctive mixture of media, incorporating tar with oil pigments or wallpaper with squid ink. In his “Rural Structures” series, which reminds Julie of previous years spent in Fargo, North Dakota, Joel incorporates hand-cut paper into the slats for imagined barns and rural houses. 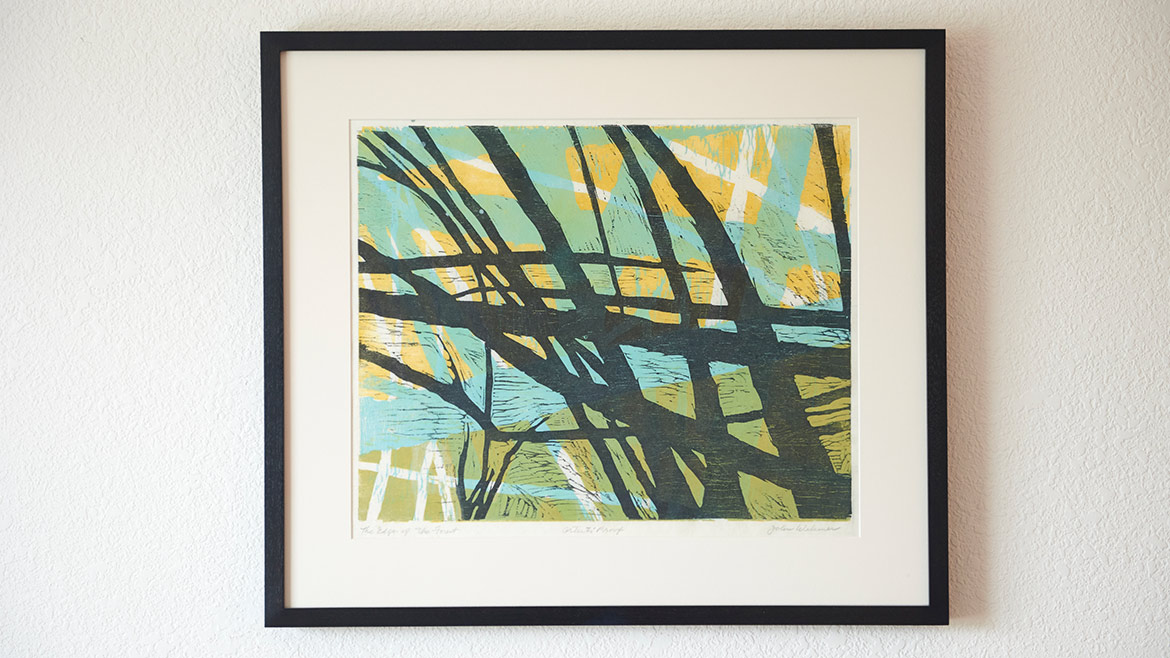 Having been friends with Joel for years, Max has been known to see a farm or a barn on his travels, snap a picture, and pass it along.  “Next thing I know, he’s painting it,” says Max. One such painting hangs in Max and Julie’s upstairs hallway, amidst other pieces from the series.

Adding to the uniqueness of their home, Max and Julie’s collection also includes various sculptures, clay pieces made from kitchen tools, a tile mosaic, a Grecian vase, and a set of porcelain teapots, most purchased from Bluestem Missouri Crafts or Art in the Park.

Max and Julie admit that their real interest in art has evolved since moving to Columbia, where they can interact personally with artists like Joel. “What’s nice about Columbia is that the artists are all around you,” Max says. “And that creates a real connection for me as a collector.”

Attorney Dan Coffman purchased his first piece of art in 2009, after graduating from William Jewell College in Kansas City. “I got my first real apartment and needed to spruce up the place,” he says.

So he headed to the Plaza Art Fair and came home with an acrylic painting of a sailboat from contemporary impressionist Mike Savage. “I loved the texture and the bold colors and brushstrokes,” he says. The painting cost him $200 and currently hangs in his dining room.

From there, he made the commitment to add at least one piece to his collection each year.

In the fall of 2011, Dan moved to Columbia for law school. He remembers attending an event for students at his professor’s home. “We started talking art and furniture, and he mentioned the places he frequented,” he says. “From there, I made friends with Melissa Williams and began picking up pieces as I graduated and had means.”

Dan’s current collection includes more than 20 paintings and drawings, as well as a small collection of glass vases and lamps from Doug Solliday. He enjoys the aesthetics of mid-century art and has focused his collection on that time period. “There’s something special about finding original art from the ’40s, ’50s, and ’60s,” he says. “It has a little more history and character, and a distinct feel to it.”

Dan’s appreciation for modern, clean lines extends to his furniture and creates a distinct look and feel that has transformed his unassuming two-bedroom apartment on East Broadway into a home that showcases his personality and style.

As a young attorney, Dan says his investment has been modest. He acquired several pieces, like pencil drawings and sketches, for as little as $35 each. His most expensive purchase has been an oil painting from Art in the Park for $750.

Dan admits that, in many cases, the cost of framing has exceeded the price of the painting. “I always regret if I skimp on framing,” he says. “If you’re going to own a piece the rest of your life, and if you’re willing to spend the money on the painting, then you need to use high quality materials on the glass and framing.” 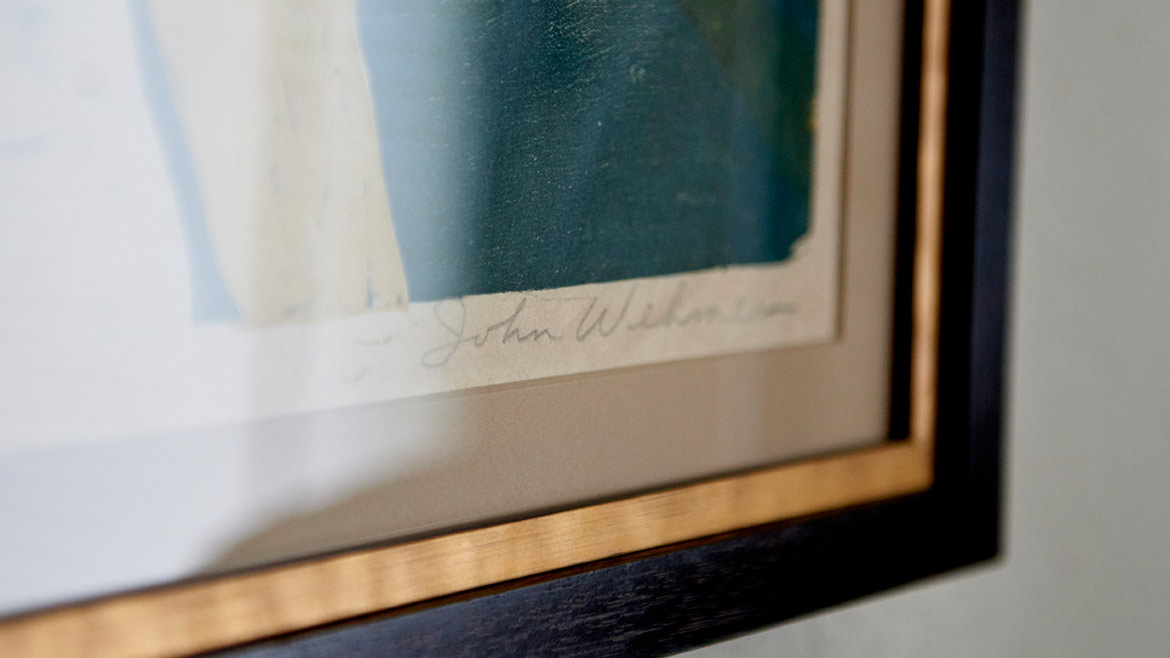 Among Dan’s collection is an etching by Columbia cartoonist and artist Frank Stack, as well as two arrangements featuring work by local artists Robert Bussabarger and John Wehmer that he acquired from Melissa Williams.

Bussabarger was an art professor at MU from 1953 to 1991 and died in 2013, leaving behind 60 years of eclectic art that focused on capturing the world around him. Among other pieces, Williams acquired a sketchbook from Bussabarger’s travels in Europe, and Dan was able to purchase a series of pencil drawings and frame them. They now hang above the couch in his living room.

John Wehmer was born in St. Louis in 1927, studied at Washington University, and created a series of paintings from 1955 to 1965 that cast an original take on abstract expressionism. After becoming disillusioned with the art scene in the late ’60s, Wehmer put his canvases away, and his “Unseen Forces” collection did not see the light of day until 2013, when Williams encouraged him to show his paintings once again.

Thanks to her persuasiveness, Dan had the opportunity to purchase two of Wehmer’s artist’s proofs, including “Green Landscape,” a bold black and gold abstract, which now hangs in his home office. “Every time I look at it, I imagine an overhead view of a landscape,” Dan says, “like I’m seeing the ground from a plane.”

Dan is always on the lookout for the next piece to add to his collection, but is currently saving to purchase a few larger, intentional pieces. “If I liked a piece and could afford it, I used to buy it,” Dan says. “Now, I have a better idea of what I like, what fits my style, and where I want to put it.”