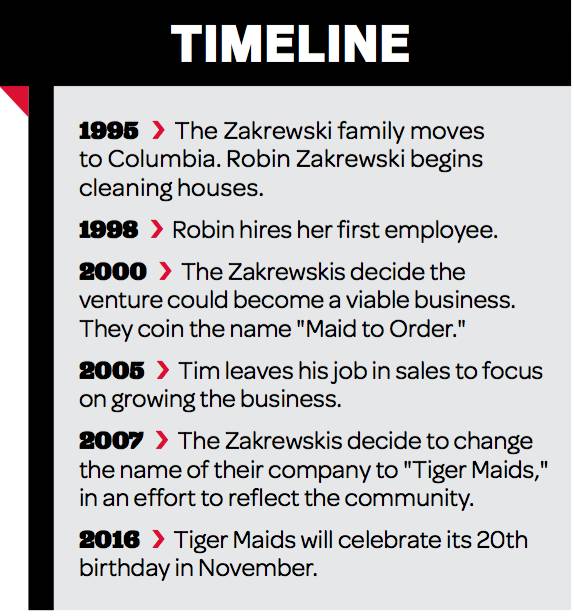 When the Zakrewski family moved to Columbia in 1995, they appeared to be passing through. Tim Zakrewski accepted a position as a plant manager. Robin Zakrewski began cleaning a couple of houses to earn some extra cash.

“I wanted to do something during the day while my kids were at school, [something] that wouldn’t interfere with taking them or picking them up,” Robin says. “So I just picked up a couple of houses to clean.”

After working for a cleaning service in St. Louis, Robin had enough experience, and she began to form connections. Robin met Pat Jones, an agent at House of Brokers, who introduced her to new clients. “My business grew very quickly from there because of her,” Robin says.

By 1998, Robin had her first employee. By 2000, the Zakrewskis decided that Robin’s cleaning ventures could become a viable business, choosing to name the budding company “Maid to Order.”

“We thought ‘Let’s see what we can do with this thing!’” Tim says. “And by 2003, we were up to about two teams or three teams, so [we had] about four to six employees over the next four years. We continued to steadily grow.”

With growth in mind, Tim left his sales career in 2007 to work at the business full time.

“We decided we were going to put all of our focus into this business,” he says. “The majority of what we’ve done and accomplished was just [by] staying focused together.”

By 2007, Tim and Robin were MU fans, and they wanted their business to reflect the spirit of the town they had grown to love — Maid to Order rebranded as Tiger Maids.

“I think that may have had some facilitation in our growth too, because people know who we are. And we make sure we pop up at the top of Google,” Tim says.

Having grown up strong, Tiger Maids needed to expand outwards.

“We really focused on being a part of the Women’s Council of Realtors, doing some chamber activities, sponsoring open houses … stuff like that,” Tim says. “That gave us a good foundation with the realtor community.

Currently, Tiger Maids services between 250 and 260 homes regularly — post-construction clean-up projects are a large contributor to the company’s growth.

“When we do post-construction clean up, we get paid to clean up [new houses] by the builders,” Tim says. “After we’re done and we do the final cleaning, Robin goes through and puts flowers, sometimes a bottle of wine, and our brochures in the houses. So, generally, those people are interested when they move in. They say, ‘Wow, my house looks great, how can I get regular service?’”

And after building up their reputation through time and strong business tactics, Tim says business now comes to them.

Robin focuses on training, staffing, and quality, rather than cleaning. Tim focuses on sales, marketing, and production management.

“We’re only able to grow because of the staff we have,” Robin says. “We have great girls that work for us.”

Tim attributes this, in part, to offering above-average pay for the cleaning industry, awarding performance bonuses, and providing paid vacations for the staff.

Even the Tiger Maids website speaks to the importance the owners place on the treatment of their staff — individual profiles highlight the personalities and talents of the staff listed, Stephanie F., Nancy and Adrianna, Taly and Jolie, Ashley and Stephanie L., Tanya and Fabiola, Marie and Natalie, and Alicia.

“The staff is a big part of our success and our growth,” Tim says. “This is a tough job to go out and do every day. They’re cleaning around three to five houses a day, and they bust their butts.”

“And they still come in happy every night!” Robin adds, with a smile. “Even on 100-degree days.”

With 20 years under their paws, Tiger Maids intends to keep the momentum going.

“I think we continue to grow with the town. As long as we’re doing what we’re supposed to be doing out there, we grow about 30 percent per year,” Tim says. “The larger we get, the more we are known and the more our reputation is known.”

Tim explains that customers are just “people who loathe that type of cleaning. Others are busy with their families,” he says. “I think that’s what we’ve stayed focused on. [Maid services] are not a wealthy, luxury item anymore. Our average customer is just a family that has two kids and a couple of pets. They’re just busy.”

This shift has also helped to boost business.

“I’d say, based upon what I know about our competitors, we’re probably up there at the No. 1 or No. 2 slot, based on volume of regular customers. I’d say our first goal would be hitting the million-dollar mark,” Tim says. “That’s something that’s not too far off in the distance.”