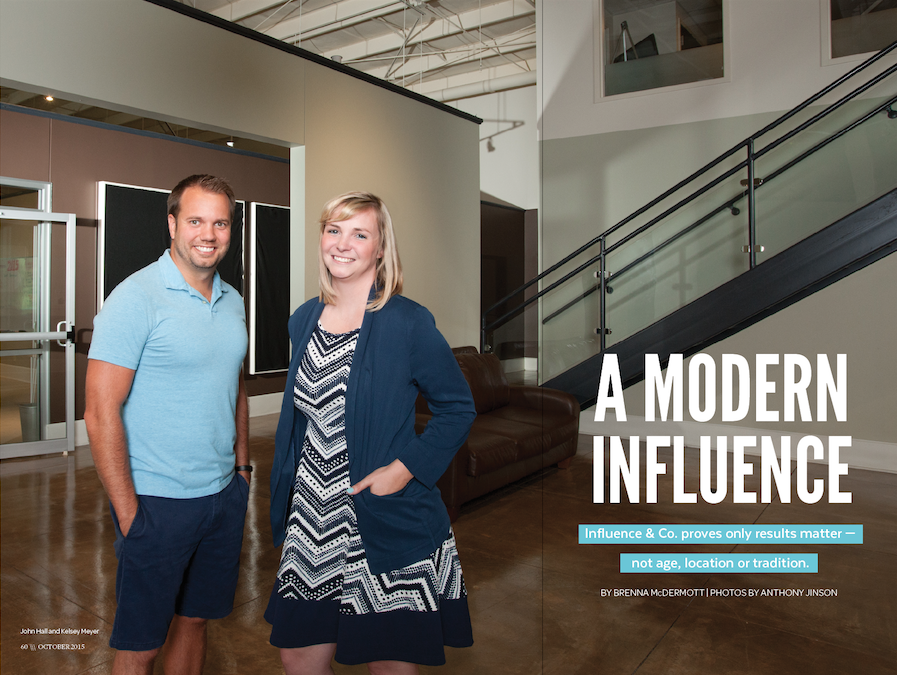 In 2011, Influence & Co. co-founder and CEO John Hall walked in most mornings wearing a suit, a Bluetooth in his ear and rolling a backpack behind him.

“We had to slowly break him out of that,” co-founder and President Kelsey Meyer says.

That’s because the content marketing agency was founded on youth, independence and yoga pants, not on tradition and suits. That culture, coupled with a specialized three-step process and enormous growth, is propelling Influence & Co. to national attention, all from its Columbia headquarters.

‘A different type of PR’

The day Meyer graduated from the University of Missouri, she and her boss, Brent Beshore, founder of adventur.es, a Columbia-based private equity firm and a startup angel investor, had a conversation. The companies he invested in were having a hard time getting publicity, and he posed a question: Is there a better way to get exposure?

Meyer realized there was a better way to get companies published.

“So at the time, I never heard of content marketing,” Meyer says. “We didn’t really know what that was. We were just doing a different type of PR.”

Adventur.es fully funded the company, Beshore wrote in an email, and Influence & Co. is a subsidiary of adventur.es. Hall and Meyer are responsible for day-to-day operations, Beshore says, while members of the adventur.es team are active board members.

Content marketing is creating articles that showcase a company or person’s expertise. Then the stories are pitched to publications all over the world. These stories aren’t advertisements; they’re original articles meant to inform the reader.

Influence & Co.’s process is three-pronged. The first step is knowledge extraction, which, Meyer points out, is much less painful than it sounds. The client shares his or her expertise on a topic in a stream-of-consciousness manner with the content strategy team. Then Influence & Co. staff write the content, incorporating the client’s know-how and the appropriate tone the article needs to get published. Then the team pitches the content to editors for distribution, through cold email and meeting editors in person. They have relationships with more than 1,000 publications, Meyer says, including TechCrunch, Forbes and The Washington Post.

Their interest, Meyer says, is primarily with business-to-business clients and technology clients. And Hall says they want to work with businesses that want to educate their audiences on a topic rather than advertise a product to them.

Past clients include Dell, American Airlines and Office Depot.

Meyer says the company has 180 clients varied across industries, from AIG, No. 46 on the 2015 Fortune 500 list, to Tower Paddle Boards, a stand-up paddleboard company recently featured on Shark Tank and acquired by Mark Cuban.

Stephan Aarstol, founder and CEO of Tower Paddle Boards, says his company had been doing traditional PR and getting exposure, but content marketing resonated with him.

“[Content marketing] was just taking somebody that may be an expert but unknown in their field and giving them a huge amount of visibility,” Aarstol says.

Within the first six months, Aarstol was published in The Washington Post and mentioned in Forbes.

Anthony Clervi, vice president of UNA Purchasing Solutions, a group purchasing organization headquartered in Columbia, says though it’s cliché, Influence & Co. has gone above and beyond for their company.

“I really feel like Influence & Co. has tried to understand what our business is, why we do what we do, who our customers are and then from there try to form a strategy that makes sense rather than, ‘Here’s your fee, here’s your rate,’ and just bill you for writing a bunch of stuff,” Clervi says. 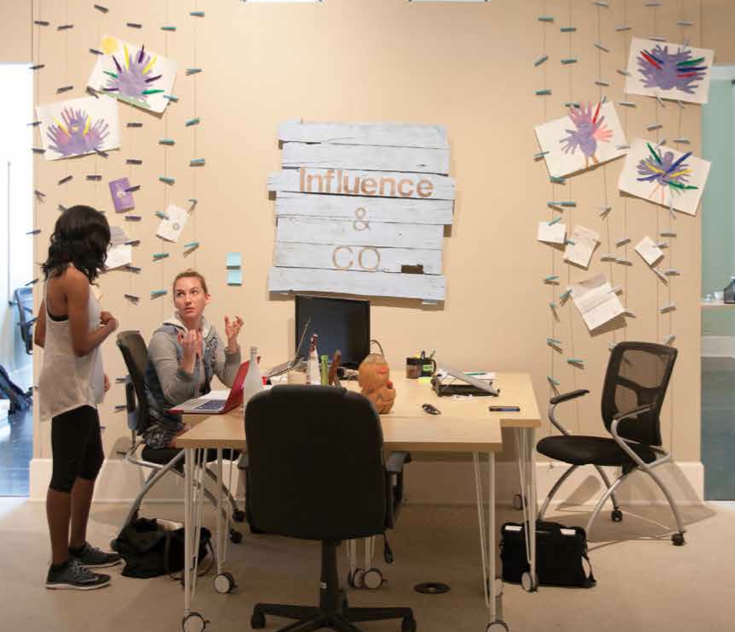 ‘It’s not about age’

For her first sales call at age 22, Meyer was expecting an audio call and was surprised when the client called via video. It then sunk in that she was wearing yoga pants and a T-shirt.

Meyer says after he agreed to a $2,000-a-month package, she realized if they could deliver something of value to the client, then neither age nor yoga pants mattered.

“I was young, and I was inexperienced, but I think something we’ve really tried to instill in all of our employees now is it’s not about age,” Meyer says. “It’s not about what you’ve done before. It’s about your capabilities and if you can develop that trust with our clients and if we can actually get [things] done.”

Greg Bier, director of Mizzou’s Entrepreneurship Alliance, says it’s that attitude that appeals to young workers, plus retreats at the lake, talent contests and dodgeball tournaments. Both Meyer and Hall were Bier’s students, and they maintain a close relationship.

The free-flowing environment is apparent around the company headquarters, located at the Museao Building. Beds; a putting green; a Ping-Pong table; “The Jar,” which co-workers contribute to when they aren’t being the best co-worker they can be; and Bud Light in the fridge all hint that tradition is not a consideration at Influence & Co. Each month a different employee serves as “culture captain” and plans an activity for the team.

Hall says he likes the shock factor. When he brought his father in for a tour, Hall had to answer for the purpose of beds in an office.

“It’s for people who want to take a nap,” Hall says, or to just sit and swing their legs off of it.

The average age of full-time employees is 26.29, and factoring in part-time employees and interns, the average age is 25.80. They attract young talent, Meyer says, because they’ve developed a relationship with MU and the EA, they promote from within and they give responsibility to young executives.

“Hiring more people and continuing to train and develop the people that we have are the two biggest challenges and
opportunities,” Meyer says. “I mean, we’re a service-based company. Our people are our product, and so we need to make sure that we continue to hire those people, treat them right and then give them the professional development they need.”

Diamond Scott, Influence & Co.’s recruitment coordinator, says the best hiring results come from employee referrals. One of her strategies is to maintain the company culture so employees continue to refer their friends and former co-workers.

Each quarter, a percentage of profits goes to the team based on performance and peer review. That, coupled with unlimited paid time off and offices in Kansas City, St. Louis and New York, contributes to that culture.

Scott says she looks for individuals who can flourish in the independent workspace. Meyer is looking for people with natural curiosity.

“So we want people to want to learn because whether you are a salesperson, an account strategist or an editor on our team, you’re speaking to the CEOs and the executives of mid- to large-size companies every single day in dozens of industries,” Meyer says. “So at any given moment, you might be learning something about the fashion industry and then switch right over into this amazing new health care technology.”

Scott’s experience with the company helps her recruit. For her, it was love at first sight.

“I tell new applicants all the time I love working for a place where I am rewarded and highly valued for the skills that I bring to the table, but also everyone knows my niece’s first name and knew what her first word was,” Scott says.

Bier says Meyer visits the MU campus at least once a semester to visit with students and recruit interns.

“They take their time to come back to campus and share their story and the challenges,” Bier says. “They’ll readily talk about their biggest successes and their biggest failures. They’re very candid here.” 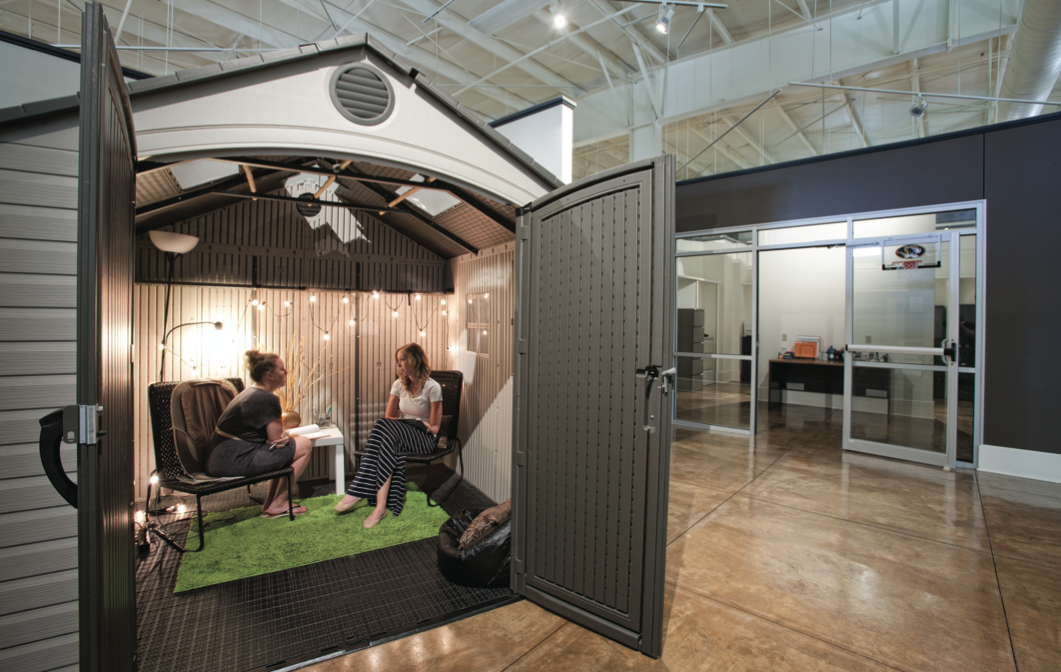 Hall spoke at a conference a few years ago, and a woman introduced him as being first from Columbia, South Carolina; then Columbia, Virginia; and finally the country of Colombia before he got the chance to correct her.

“I think people are surprised that we’re doing this all from Columbia,” Hall says. “And we love it. I mean, at first I was scared, like, ‘Let’s not tell people we’re from Columbia,’ which is bad, but it also hurts your credibility when you’re trying to do it with like two, three people. Now we’re like, ‘from Columbia Missouri.’ Boom, right there.”

He wasn’t embarrassed by Columbia, but he was concerned about the skepticism others might have based on their location. Hall also says their Midwest attitude — treating people well and wanting employees, clients and publications to be happy — appeals to media members in major cities.

“One managing editor says: ‘I like you. I like dealing with you guys because you actually care about me,’” Hall says.

For Clervi and UNA Purchasing Solutions, another company located in the Midwest and working nationally, it was fun to work with a company that understood the Midwest attitude but not essential.

“We weren’t too concerned as far as where they were based,” Clervi says. “We were more concerned about what they could do for us. What are the things they could help us get to?”

Staying relevant in a changing digital landscape will be top of mind for Meyer and Hall. They’re developing their own project management program called The Portal, and soon clients will be able to log in and collaborate. They’re showing the platform to companies in San Francisco and Silicon Valley, Hall says.

They’re also looking at growing services, from more inbound marketing to growing the types of clients they service, Meyer says. They’re always open to opportunities that pop up.

“We kind of joke sometimes that we don’t have a huge strategic plan, but we’re always strategically planning because things do change so quickly,” Meyer says.

That growth and national recognition spark discussion of selling the company. Hall and Meyer say it could happen down the road. They’ll talk with anyone, Hall says, but for now, they’re on a path to do more.

“People are interested,” Hall says. “They do approach us to talk about it. It’s not like the opportunities are not there, but I think it would be very premature at this moment.

“But it could happen down the road,” he continues. “But at this point, it’s not. We’ve got too much to go now.”

Beshore wrote in an email that all successful companies are approached to sell, and Influence & Co. is no different. “We’re not looking to sell and would anticipate continuing to help grow the company for the foreseeable future,” he said.